According to Basel III, the solidity of a bank is approximated by a ratio between its capital with certain peculiarities (TIER1) and its assets weighted for the corresponding risk. Analyzing the numerator of the ratio, the TIER1 capital is made both of common shares and retained earnings (CET1) and of Additional Tier1, equity like bond instruments able to fully absorbs losses at the point of non-viability. The denominator instead is obtained categorizing assets based on their risks and then multiplying them for a constant in the range (0%-150%). The ratio should be above 6%, reaching 10/12% with the addition of countercyclical and capital conservation buffers, containing however certain types of bonds.

It is now clear that, as risk is mounting in the Chinese banking industry, assets are becoming riskier and banks have to increase their capital positions to maintain the ratio constant and compliant with Basel III.

​Besides, largest banks also face an additional requirement for the total loss-absorbing capacity, a category of liabilities similar to regulatory capital. Being China an emerging market, its bank will have to comply to this rule by 2025, with a further increase in the requirement by 2028. This means a need of raising will need to raise a further $400bln in capital to meet this requirement, as shown in the graph below. 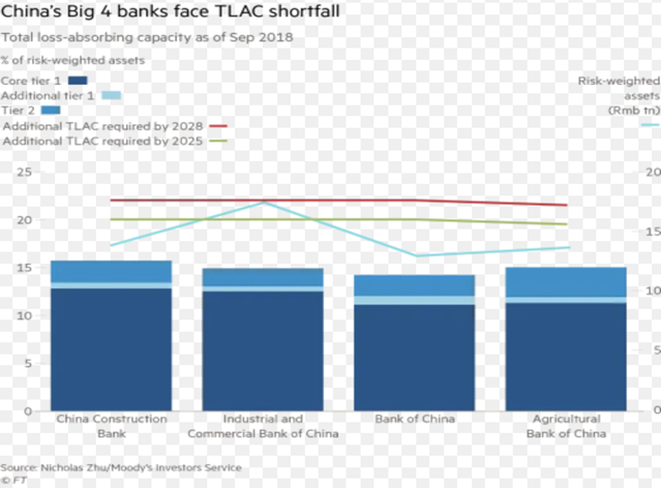 However, instead of issuing new shares, they are increasing TIER1 capital through additional tier 1, issuing equity-like debt instruments such as perpetual bonds and contingent convertible bonds. Perpetual bonds ensure a yield for an indefinite period of time, are formally bond but are exposed to losses in case of defaults and can be called arbitrarily from the bank. The second type of AT1 instruments are bonds that can be converted into shares upon occurrence of certain event, for example a given increase in stocks’ price. In principle, they are convenient both for the issuer and for the investor, providing banks with relative cheap capital funds and investors with relative high yielding investments.

The biggest two bond emissions so far have been the Shanghai Pudong Development Bank’s issuance of a roughly $ 7 bln convertible bond and Bank of China’s issuance of a $5.9 bln perpetual bond, but surely other banks will follow this path due to the convenience of this instrument and the need to increase their capital position.