The rise of Investment Banking Boutiques

Boutiques have made more progress in stealing business from investment banks in Europe than in the United States. If we take 2015 as an example, they accounted for 27.5% or $2 billion of total completed M&A deals fees. Consequently, more American bankers are crossing the Atlantic to set up shops in Europe and poaching top dealmakers. Boutique advisory firms now receive nearly half of all mergers and acquisition fees in Europe, stealing market share and top dealmakers from global investment banks hampered by a deep focus on cost-cutting and regulations.

When former Lehman Brothers banker and deputy US Treasury secretary Roger Altman founded Evercore Partners in 1995, his company joined a select group striving to break into an M&A world dominated by bulge bracket banks. Mr Altman’s empire has grown to more than 1,300 staff across the globe. But hundreds of other independent banks offering M&A advice have fallen by the wayside.
Centerview, Moelis, Evercore, Guggenheim, Lazard, Greenhill, Perella and Zaoui to list a few, were at the heart and core of many of the most complex deals complementing, if not supplanting, the much better known major players including Morgan Stanley and Goldman Sachs. 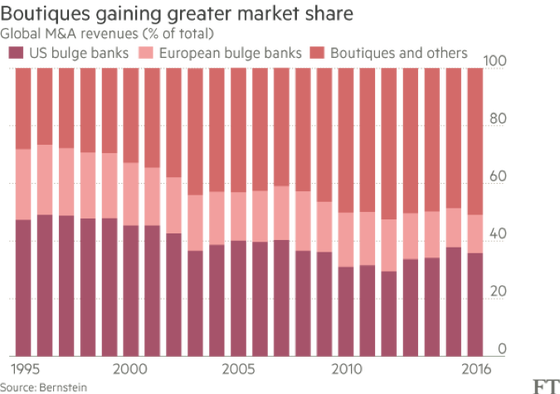 In spite of their endurance, and their boast of providing intimate advice that banks cannot compete with, many in the “traditional” investment banking world dismiss boutiques out of hand. They are especially sceptical of the boutique that develops a star culture around the founder: “The only business proposition is the individuals. In the medium term, they don’t have a future,” says one senior investment banker. However, growth is not always the “end game”, and teamwork in boutiques is often brought to the next level. “The question is not can you grow, it’s do you want to,” says Michael Zaoui, a former Morgan Stanley executive and one of Europe’s most prolific dealmakers who founded Zaoui & Co with his brother Yoel in 2013.

Boutique bankers argue that any drawbacks are more than compensated for by their two biggest advantages: independence and discretion. A senior banker says clients were “much more relaxed in sharing information” for the few years he worked at a boutique. This is because information must be shared with a lot more people in large banks, for necessary things such as conflict checks. In boutiques, the circle is a lot smaller and so there is less danger of information leaks. Additionally, the smaller the bank, the greater the so-called “key man risk”, where the reputation and earnings of the business are linked to the one or two big names associated with the bank. This is great from a client’s perspective, since it ensures an optimal alignment of interests between the two parties: every major deal is of fundamental importance for the boutique and therefore it will be given the best possible treatment.

To conclude, one boutique executive says juniors are more than happy to join the team because: “You’re increasing the net present value of your career experience by 10 years”. On top of this, by working for boutiques deal makers can further develop their prestige by focusing on doing what they love – deals – without having to deal with as much bureaucracy. According to a bulge-bracket banker who eventually shifted to a boutique in 2007: “At a big bank a lot of time you become a salesman of securities and other financial products. I really missed spending time with clients.”