​On April 18th 2019, Canopy Growth Corp announced it would buy Acreage Holdings for a total consideration of $ 3.4 billion, upon federal legalization of marijuana in the US.

Canopy Growth is a cannabis company based in Ontario listed on both the Toronto and the New York Stock exchange. The company’s main activities are the growing, possession and sale of cannabis.
Acreage Holdings is one of the most important multistate cannabis operators in the US with a diverse portfolio of cultivation, processing and dispensing operations. As a matter of fact, the company owns cannabis licenses or has management services agreements in place with license holders to assist in operations in roughly 20 states.

Marijuana is completely legal in Canada, but not yet in the United States. Until the companies’ announcement, it was not considered legal for Canadian licensed marijuana producers to invest in US companies. However, the deal structure, which is based on an option for the buyer to buy Acreage once marijuana will be federally legal, has made it possible to invest in a US business that sales products containing THC, despite the fact that Toronto Stock Exchange and New York Stock Exchange did not allow these kinds of investments.

Thanks to this innovative transaction solution, it is reasonable to expect further M&A activity in the marijuana sector in the future, as companies from other industries such as consumer goods and pharmaceutical will try to take advantage of the prosperous US cannabis market.

It is important to mention that there is a strong strategic rationale to pursue this deal for both companies. Indeed, Acreage will benefit immediately from Canopy Growth’s popular brands such as Tweed and Tokyo Smoke, as well as from other intellectual property. On the other hand, once the right is exercised, Canopy will get access to markets in US, which has a larger market for legal marijuana, accounting for roughly $ 10 billion last year. 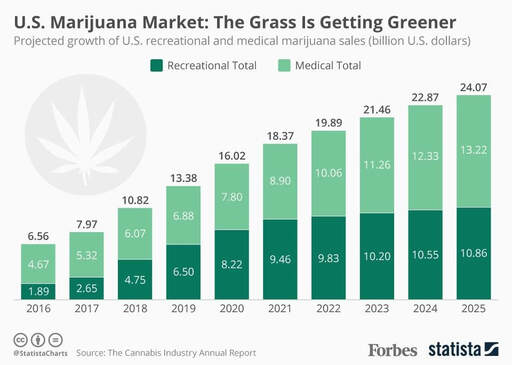 “Today we announce a complex transaction with a simple objective. Our right to acquire Acreage secures our entrance strategy into the United States as soon as a federally-permissible pathway exists,” said Bruce Linton, Chairman and co-CEO, Canopy Growth.
“When the right is exercised having access to Canopy Growth’s deep resources will enable us to innovate, develop and distribute quality cannabis brands across the U.S. and continue expanding our U.S. footprint”, said Acreage Holdings Chairman, CEO and President Kevin Murphy.

The transaction is subject to the approval of both companies’ shareholders, as well as regulators and stock exchanges. Upon completion of the deal, contingent on the federal legalization of cannabis in the US, Acreage shareholders will own approximately 12.1 percent of Canopy Growth, on a pro forma basis. The two companies will continue to operate independently until then.

Greenhill & Co acted as financial advisor to Canopy Growth and provided an independent fairness opinion to the board of directors of Canopy Growth, while Cassels Brock & Blackwell LLP and Paul Hastings LLP served as legal counsel. Acreage Holdings was advised by Canaccord Genuity Corp., as financial advisor, and by Stikeman Elliott LLP, as legal counsel.