The post-referendum period meant a record high for the Sterling, which gained ground reaching almost the pre-Brexit levels. This currency reaction was mainly due to the market becoming optimistic about how leaving the European Union was actually going to be achieved in an economically efficient manner and to a positive national economic outlook.

The uncertainty about the Central Bank of England to fall in line with the FED monetary policy example of rising yields has played a big role in the drop experienced by pound on April 27th: the currency has actually reached its lowest level – 1.3764 per dollar - against the US dollar since the beginning of March, falling by 1% and below its 100-day moving average. Such an event has of course sparked traders’ action. The currency drop had also the effect of dragging the two-year gilt yield below 0.8%. 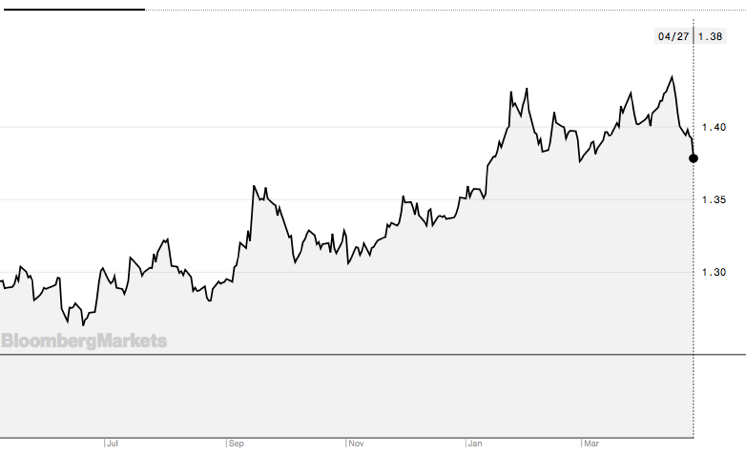 
However, the true cause behind market expectations is the release of GDP growth data for the first quarter of the year: the report declared a growth of a mere and unexpected 0.1% - lowest level in five years - against a consensus forecast by City economists in the region of 0.3%.

From one hand, one-quarter data are not so catastrophic for the British economy itself, since there is still sufficient confidence to say that the national GDP growth can have a comeback in the next month after a limited period of weakness. Confirming this version is the fact that part of this GDP inconsistency was due to bad weather – thus a phenomenon tied to a limited timeframe – which affected sectors as retail and constructions. Moreover, the British GDP shared the trend with other European Countries, such as France, due to both an adjustment after an extra-optimistic end of 2017 and a structural decrease in demand. 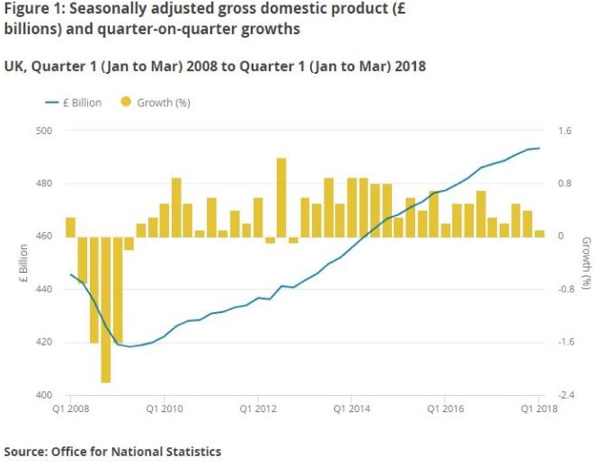 On the other hand, the logical consequence of an economy that stalls is that the Central Bank has less room to freely use monetary policy in a restrictive sense: an interest rate hike in concurrence  with a stagnating economic environment along with a dropping inflation is very unusual, risky and consequently very unlikely.

In turns, this has the consequence of making the market lose their hopes in an increase in rates next month and thus taking a strong stand against the pound. The pound weakness was made even more brutal by what some have defined as “the dollar comeback”. Indeed, thanks to strong economic data and to a FED actually rising rates as promised, the dollar has managed to gain back ground at the expenses of the British Sterling.

In the end, persistence and magnitude of the downward pressure on the UK national currency is not clear, but it surely depends on the ability of market participants to understand the non-definitive nature of the economic outlook of the Country and on the effectiveness of the Bank of England in communicating that a slowdown in the rate hike program does not mean it is not going to happen.
As for April 29th, the currency may look like having begun a slow path towards recovery recording a level of 1.3781 per USD dollars.