A never-ending story: FT reveals new suspects about accounting practices of Wirecard. The company remains a battlefield of bulls and bears

Wirecard is an online payment processing and financial service provider which serves customer along the entire payment value chain and offers a full suite of solutions.  The company has long been seen as the rising star within the German Fintech scene and replaced Commerzbank, one of the country’s largest bank, in the German prime standard index DAX which compromises the largest 30 companies in terms of trading volume and market volume. Since the promotion to the Dax30 Index, the share price of Wirecard has experienced an unusually high volatility, exceeding the market average by far. Sharp price declines coupled with slow but steady reversions illustrate the stock price pattern of the company in 2019. The articles in the forthcoming aims to shed some light on the controversies around Wirecard which caused the high volatility.

The Financial Times allegations – A never ending story
An investigation team of the reputable newspaper Financial Times has been looking into Wirecard for a long time, closely following the company’s global expansion. The firm’s business operations in Europe seem to be solidly managed and of legit nature with respected counterparties and clients like Allianz, KLM or Rakuten but, as the expansion kicked off, an increasing portion of revenues and profits were contributed by global payment processing hubs like Dubai or Singapore.
On the 30th of January, the share price plummeted the first time after the Financial Times published an extensive report, suspecting the company of ‘falsification of accounts’ and ‘money laundering’ through their Asian-Pacific payment hub subsidiary Al Alam that is based in Dubai. In 2016, Al Alam generated 15 percent of global sales and was contributing more than 50 percent to the group’s EBITDA. 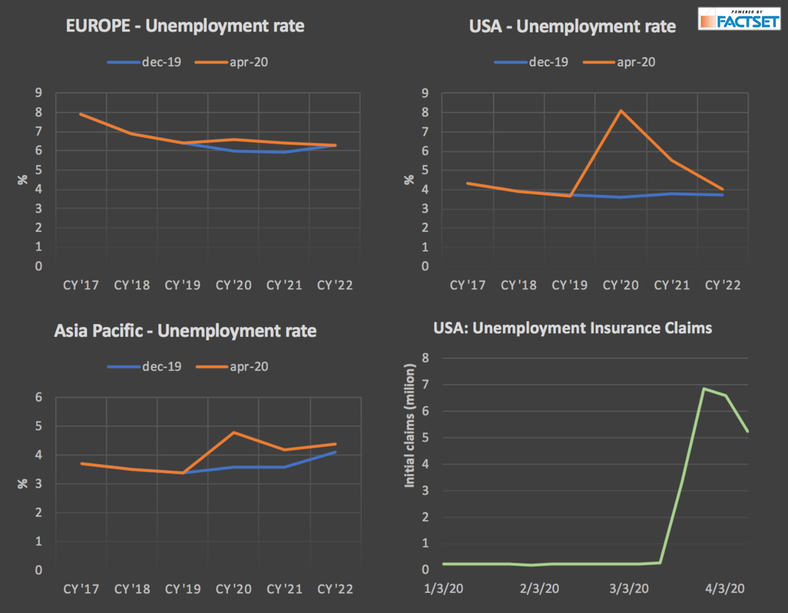 ​Even though Al Alam’s operations were of high importance to Wirecard’s profitability, transparency in reporting was low. After the Financial Times revealed initial investigations on Wirecard, the firm issued a statement calling the allegations ‘false, inaccurate, misleading and defamatory’ and filed a lawsuit against the newspaper calling for market manipulations but did less to provide more insights on Al Alam’s contribution to the group’s EBITDA. The investigators were however not distracted by the lawsuit and kept looking into Al Alam’s operations and started with investigating Al Aman clients based, which they claim to know based on public information and an internal list that has been shared by whistleblowers. The investigators contacted all of the 34 clients and found out the majority of the mentioned clients apparently had never heard of Al Alam. 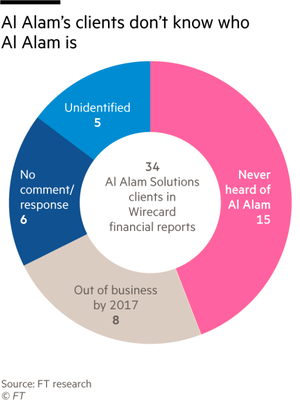 ​Coupled with further information provided by whistleblowers, the newspaper prepared a follow-on investigative report that was published on 15 October 2019. In a nutshell, the report is based on supposedly internal accounting spreadsheets that should confirm the validity of the client list of Al Aman and hence support the suspect of falsification of accounts and artificial increases in revenue and profits. Moreover, the report includes screenshots of internal mail and chat correspondence discussing the preparation of Al Aman’s accounts and in which accountants express doubts about the correctness of revenue recognition and impairment tests. Payment processing firms like Wirecard can either expand organically by originating new business through internal sales forces or by buying existing client portfolios or third-party payment processors. Wirecard did the latter and hence an accounting value is attached to the acquired portfolio. The accounting values are legally required to be tested for impairment annually. The FT additionally accuses Wirecard of falsifying the information and processes for the impairment tests in order to mislead their auditors. The accusations are based on an internal chat between the head of accounting and one of his subordinates that was leaked by an whistleblower.

After the release of the second investigative report by the FT, share prices plunged again by more than 15% on a single day. While the company is still claiming that the reports are the work of market manipulators and the leaked documents are false, investors start asking if the company is credible and if the documents published by FT are really fake. In order to counter to the increasing interest of shortsellers in the company, Wirecard engaged KPMG to verify the accounting policies and confirm the correctness of the P&L items in questions.
On the one hand, it’s hard to believe that a leading German company has misled investors and auditors by falsifying accounting data and artificially doubling profits. On the other hand, the silence of Wirecard’s top management has cast doubts why the company is not able to underline their statements with credible information that confirm the correctness of the accounting practices.
To summarize, the company remains a battlefield of bulls and bears. Equity research analysts of Berenberg summarize that the firm’s financial results are on track and that the outcome of the KPMG review into the FC accusation will surely be the next catalysator for the stock price, resulting in a buy rating which implies a 73% upside potential of the share price. Other analysts are more cautious and have reduced price targets. Bernstein analysts stated in a client newsletter ‘at this point we have more questions than answers’. It remains to be seen if the KPMG report can solve all the doubts of investors and analysts but its expected publication in Q1 2020 will surely move markets in one or the other direction.