​A true merger of equals: BB&T and SunTrust to create the US sixth-largest bank

On February 7th 2019, BB&T agreed to buy SunTrust for an all-stock consideration of $ 28.2 billion, creating a bank with a combined market value of $ 66 billion.

According to the two regional lenders involved, the combined company will be the United States’ sixth-largest lender with approximately $ 442 billion in assets, $ 301 billion in loans and $ 324 billion in deposits. 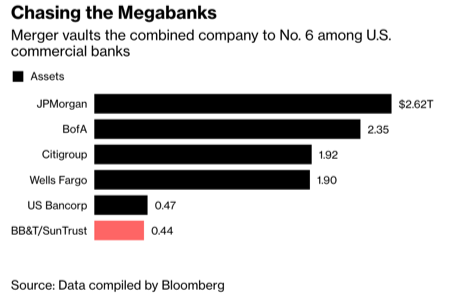 The combined company will leverage its complementary businesses to generate additional revenue opportunities through BB&T's Community Banking and insurance operation and SunTrust's leading middle market corporate & investment banking business and digital consumer lending platform.
Thanks to the enhanced scale, the combined bank will be able to invest heavily in technology in order to compete on mobile and automate existing system, as well as to improve its cyber defense.

"This is a true merger of equals, combining the best of both companies to create the premier financial institution of the future," said BB&T Chairman and Chief Executive Officer Kelly S. King. William H. Rogers, Jr., Chairman and Chief Executive Officer of SunTrust, said, "By bringing together these two missions- and purpose-driven institutions, we will accelerate our capacity to invest in transformational technologies for our clients”.

The deal will likely result in annual cost savings of roughly $ 1.6 billion by 2022, which will come from synergies in facilities, information technology, shared services, retail banking and third-party vendors, and it is expected to be cash EPS accretive in 2021 by 17% and 16% for BB&T and SunTrust, respectively.

Under the terms of the merger agreement, SunTrust shareholders will receive a fixed exchange ratio of 1.295 shares of BB&T stock for each share of SunTrust. Given the firms’ closing prices on the day before the announcement, this implied a buyout price on SunTrust of $62.85 per share, a 7% premium to SunTrust closing price on February 6th. In response to the announcement, shares of both firms surged, with SunTrust soaring 8% and BB&T climbing 4.5%.
Upon completion of the deal, BB&T shareholders will own approximately 57 percent and SunTrust shareholders will own approximately 43 percent of the combined company.