It is considered to be one of Africa’s most rapidly emerging industries, valued at over $300bn. With the United Nations expecting the business to triple its market value to over one trillion USD by 2030, agribusiness has often been referred to as ‘Africa’s new gold’. Yet, being a still uncommon term in Europe, what exactly is agribusiness and what is its potential?

Agribusiness is essentially a broad term that comprises the businesses involved in agricultural production. This includes not only the farming itself, but the entire value chain, from selling, to seed and machinery production as well as processing. It is therefore a vertically integrated business system involving the entire supply chain. While fully developed in Europe, it is still an evolving and growing structure in Africa.

With the population continuing to grow and much of Africa developing economically, there is an unprecedented demand for locally produced agricultural products. The World Bank currently values the business at $313bn, with estimates of the United Nations expecting a market growth to one trillion USD by 2030. Given this potential, the World Bank argues that agribusiness “should be at the top of the development and business agenda”. It would for instance allow countries to reduce their imports of commodities, such as maize and rice. Senegal would be able to cover local demand of rice by growing it domestically, but is lacking the initial capital and investments in irrigation systems to sustain production. Similarly, despite Sub-Saharan Africa being well suited for dairy production, only Kenya has been able to establish a formal competitive dairy industry. 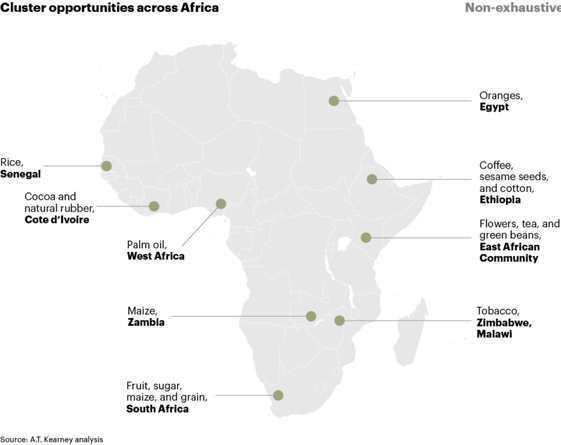 It is evident that although capable of large-scale agricultural production, most African countries are simply lacking the necessary investments. Although primarily a development issue, with the African Development Bank and World Bank providing much of the assistance, it is also possible for local as well as international banks to provide loans and funding for projects. Citigroup has for instance targeted Côte d'Ivoire as an African hub and is expected to launch several initiatives. In supporting SMEs, there is a direct potential for banks to earn a return and we are likely to see more and more movement by international players in the upcoming future. China, being well established in its African ventures, has already ramped up its contributions and stakes, committing about $15 billion to agricultural initiatives and placing heavy emphasis on direct cooperation.

So, is agribusiness Africa’s new gold? It surely is a unique opportunity and platform for the continent to extend its development. If done properly, it can lead to both economic and social development, raising millions into prosperity. In terms of capital markets, this would ensure the growth of agricultural businesses and create new trading possibilities, especially for European firms who benefit from geographic proximity. While not necessarily gold, it does create a pathway to a promising future.