In an equity market in which large-cap tech stocks trade at overly high valuations, Alibaba (BABA:NYSE)  is a clear exception. Since October the stock has fallen more than 25% bringing the company to a market value of $628 billions. This underperformance reflects a variety of risks the company is currently facing. After a brief  introduction on Alibaba's business model and the results achieved during the last decade, this article will investigate the two main challenges faced by the company  (Chinese government heightened pressure on large tech players and foreign anti-China polices) in an attempt to to clarify Alibaba's long-term growth outlook. 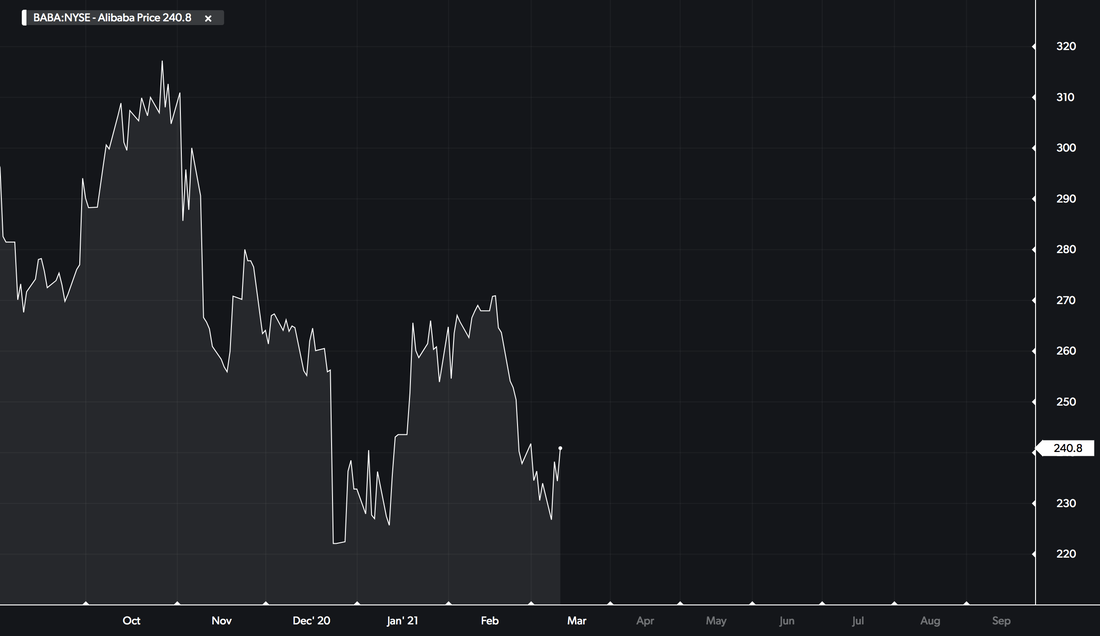 ​With 900 million active users in 2020 and a turnover of more than $71 billion, Alibaba constantly ranks among the world’s biggest
e-commerce companies, the largest in terms of gross merchandise value (GMV).
Alibaba operates through diverse platforms such as Taobao, Tmall, Aliexpress, Alibaba.com and Alipay. Taobao and Tmall are active in China while Alibaba.com and Aliexpress operate in the international market. What differentiates Alibaba Group from Amazon is that most of the exchanges that take place on its platforms occur between companies (B2B transactions).
Finally, with more than 1.2 billion customers, Alipay is a payment platform which provides personal loans as well as insurance services.
In order to have a deeper understanding of the company, it could be helpful to study Alibaba’s sources of revenues. Certainly, the biggest source of revenue is the “Core Commerce” which accounts for 84% of total revenues followed by the Cloud Computing segment which represents 10% of sales. Remaining revenues are generated by “Digital Media and Entertainment”, “Innovation”, “Cainiao  logistics” and “Other”. The following graph shows in detail how revenues were generated in the last quarter of 2020. 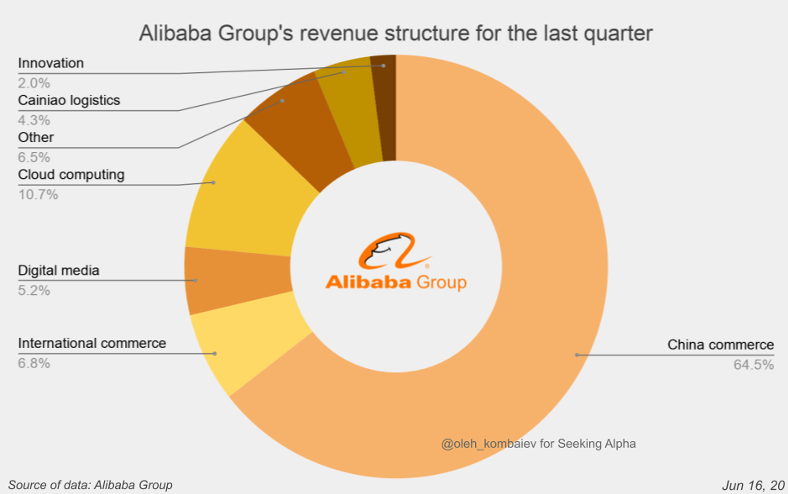 Company’s revenues are growing at a fast pace. In 2010 Alibaba’s revenues did not even top the $1 billion threshold. However, in 2020 they amounted to $71.985 billions. Importantly, this corresponds to a 30% growth against the previous year.
Net income greatly improved, going from $-117 millions in 2010 to $21 billions in 2020. The chart helps in understanding the exceptional growth that the company experienced in the last 10 years (revenues are yuan-denominated). 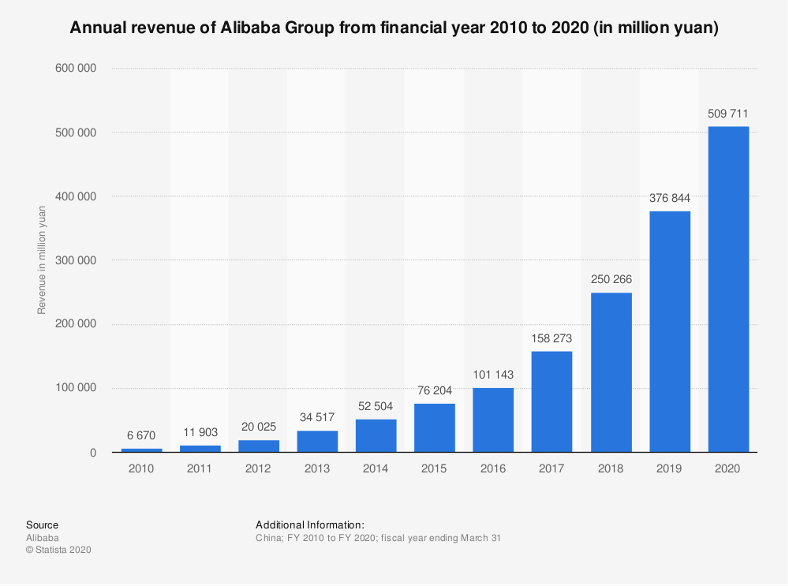 However, the market does not seem to appreciate the company as shares are traded at a PE ratio (TTM) of 24 which is very low if compared to Amazon’s PE ratio (TTM) of 74. Indeed, Alibaba is facing challenges that are scaring investors and have generated uncertainty over its capability to generate stable returns.

​Alibaba Group holds 33% of AntGroup which, in turn, holds Alipay.
As previously discussed, Alipay offers payment services and currently offers credit and insurance services. The company is leader in the mobile payment transactions in China with over 50% of market share. Moreover, as of June 2020, Ant had 265$ billion in consumer loans on its balance sheet. The size of these numbers prompted the government to take action to control Ant’s activities regarding loan issuance and wealth management. In October, Ant’s IPO, expected to reach a $37 billion valuation, was halted. This was followed by the decision of Chinese regulators to launch an antitrust investigation.
The Government does not seem to be worried about Alipay’s traditional business of offering payments services.  Chinese authorities are mainly concerned about its growing credit and investment business, a segment of the market that is still affected by serious regulatory loopholes.  According to Nan Li, a Senior Economist of the International Monetary Fund, Ant’s business model may have negative impact on China’s entire financial system and can prevent a healthy development of the Chinese mobile payments industry because the company is highly involved in the OTD market. Through this specific model of lending, the originator of a loan sells it to various third parties in order to realize greater risk sharing within the economy. Moreover, it allows the lender to securitize or sell the loan rather than holding it on its balance sheet (OTH model). Under this business model, the originator’s lowered incentive to screen and monitor borrowers may potentially drive consumers to borrow money that they will not be able to return.

Pan Gongsheng, People’s Bank of China’s Vice Governor, highlighted the issue of Ant’s poor corporate governance, and the necessity of a stricter regulation on Ant’s activities.This is a big challenge for Ant Group. Fintech services lead the impressive growth of the company (fintech segment’s revenues rose from $29 billion to $68 billion in the last two years) and a strict regulation of the sector would certainly have a strong impact on its financial performance.
However, Alibaba has a claim on only 1/3 of Ant’s $2.7 billion net income. As a consequence, Alipay is not a big source of income for the Group and, even though its dominance would be put into question by the Government, Alibaba Group business would be hit only partially.

Holding Foreign Companies Accountable Act
Another source of risk for Alibaba comprise foreign economic and trade policies with a clear anti-China bias. At the end of its administration, Trump signed an act that threatens to delist Chinese companies from US markets if they fail to comply with US regulations within 3 years. This measure turned away many investors from the possibility of acquiring the company. But is it rational to avoid buying Alibaba only for this reason? Maybe it could be the case but, as for now,  it is impossible to predict  whether the company will be able to meet US standards . However, its auditor since the IPO has been PwC, famously known for its reliability and certainly a good guarantee for investors. Furthermore, the company has a period of 3 years to adapt to the new measures established by the Act. Accordingly, full compliance before the said deadline shall not be a serious concern for long-term investors.

​Chinese restrictions over tech giants are expected to be intensified but this would partially affect the e-commerce company. Indeed, Antgroup is not the core business: its net income represents only 4.3% of Alibaba’s sources of revenues. The market seems to have been overreacting during last months. The company appears to be trading at a discount and could be a BUY for long-term investors  who are not excessively  concerned about short term spikes in volatility.
Alibaba has a attractive business fundamentals and has shown in the last 10 years that its business can grow at impressive rates. Challenges that the company is currently facing should be solved in the long term and do not threaten its business model. According to Yahoo Finance, the average analysts price target for the company is $324, far away from the actual price of $238 per share.

Note for the reader: data on the stock's prices and market valuation date back to 12/03/2021

BSCM would like to thank TOGGLE for giving us access to their AI-powered investment research platform and providing charts and data.