​All we know about Apple’s launch into services

Apple made waves on March 25th at its surprise event where Tim Cook, Big Bird, and Oprah all joined forces to unveil the company’s newest range of services, including a news subscription, a credit card, a gaming package and a video streaming service. Apple usually introduces hardware, but this event was different: the tech company has only introduced software this time. Many analysts consider this a turning point for Apple’s history for several reasons.

​First, with its move to become a content creator, the main source of competitive advantage is the cash flow and the installed base of users. With its upcoming streaming video service, Apple will not solve any new problems. But it has got the cash to buy premium content and a huge audience to sell it to. In the sale of content and services for the 1.4 billion iPhones, Macs and other devices in active use, Apple has barely scratched the surface. The company is following the classic subscription business model that many Silicon valley’s giants love. The plan is to bundle all up at prices below par and sign on as many users as possible in the hope that profitability will come with scale. With debt, Netflix does it. Apple can afford to do this with a free $64 billion annual cash flow.

Second, at a time when other internet giants are under fire, there is a chance to carve out a trusted position. In all the services it announced this week, Apple put emphasis on privacy and security. A reputation for quality, style, and ease of use in hardware and software is a legacy of its history. This sort of brand differentiation can be advantageous for decades.

Third, moving from selling hardware to services leaves a dilemma. Adding compelling new content on video, gaming, and news should keep people longer on their Apple screens, strengthen the digital ecosystem of the company, and help it sell more gadgets. But it will be difficult to make a return on the huge entertainment spending unless it spreads the investment across the widest possible audience, which means going beyond its own hardware. This friction between vertical and horizontal business models is not new for the company. An example for this is iTunes. Making it available for everyone gave Apple the opportunity to build its presence in digital music.

Fourth, over a decade after the App Store was born, the company’s relationship with some app developers is going to change completely. It is already competing with other services for music streaming. Now it is about to do the same with new video, game and news subscription services. It will be interesting to see how Apple is going to promote its own services to its users, and what that means for iOS as a third - party app platform.

​The Cupertino’s giant entering the streaming world was seen as major provocation to Netflix but according to John Gapper, a Financial Times’ journalist: “Netflix need not panic. Apple is entering the arena, but it is not a Netflix killer.” In addition, he continues: “Apple is more cautious than both Netflix and Amazon, which devoted an estimated $6 billion to Prime Video last year. It also leaves the way clear for a weightier challenge to Netflix from Disney, which together with its new acquisition 21st Century Fox spent $16 billion on original content, excluding sports.” With all these new contenders, it is not easy to predict the winner. 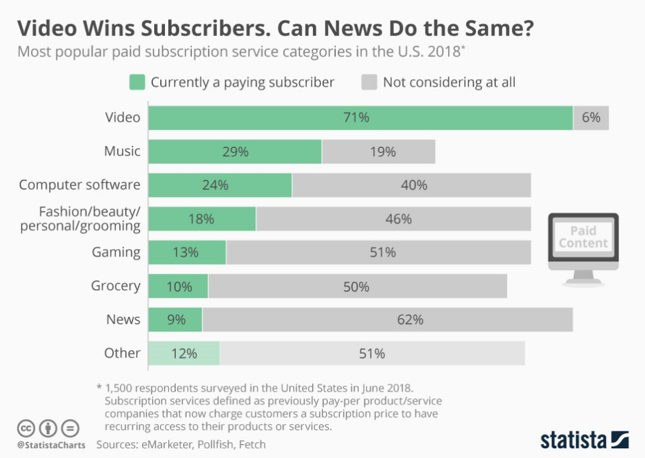 The chart shows the most popular paid subscription service categories in the U.S. in 2018. Source: Statista
The success of Apple’s newest services will depend on the people’s appetite for these services. According to a survey conducted by Fetch and Pollfish, seven out of ten people are currently paying for a video service subscription. This demand for video service subscriptions is large, yet interest declines sharply across other product categories. As a company, Apple has proven its ability to generate massive change, and with such a large user base, few other companies are as equipped to enter this new business model. We shall see what the future brings for the Technological Superpower,  Apple.