Amazon reshapes the streaming industry through the acquisition of MGM

On the 17th of March Amazon closed an $8.5 billion deal for the acquisition of Metro-Goldwyn-Mayer, the iconic movie studio behind the James Bond series and the Rocky franchise. The move has certainly got the attention of movie studios and streaming services, as one of the biggest companies in the world now becomes a much stronger competitor, through one of the largest deals of the last 15 years in the movie industry. Amazon decided to acquire MGM in May last year, mainly to bolster their streaming service, after MGM had begun searching for a buyer due to financial struggles in 2020. The deal will not only be one of the most important of 2022, but also a defining moment for the future of entertainment.

Industry overview
​
When Harvey Wilcox bought a piece of land in Southern California in 1887 and named it ‘Hollywood’, he had no idea that only a few years later filmmakers would make this spot the movie center of the world. Fast-forward a few decades and motion pictures would become one of the largest and most well-established industries in the world, growing rapidly year after year. However, the industry took a big hit in 2020 as most cinemas were closed worldwide due to the lockdown. While in 2021 reported global ticket sales of $21.3 billion were still a hefty 50% decrease from the average $41 billion during pre-pandemic years 2017-2019, the industry shows that it is quickly recovering as global box office was 81% higher in 2021 compared to 2020, and a 65.3% increase in US ticket sales is expected in 2022 as the industry returns to “normal” levels.

The studio system dominated the market ever since its early days, with the “Big Five” usually owning more than 80% of the market. Initially, the five major studios were Warner Bros., 20th Century Fox, Metro-Goldwyn-Mayer, Paramount, and RKO, while among the then smaller studios we saw Columbia, Universal, and United Artists. The composition of the Big Five has changed throughout the years, with studios such as Columbia and Universal rising to prominence and new studios, namely Disney and Warner Bros, sweeping the market in recent years.

Historically, the US was seen as the most important region for worldwide cinema, but it is undeniable that the Asian movie industry has become more profitable, with their box office numbers increasing from about $7 billion in 2009 to $17.8 billion in 2019 just before the Covid outbreak. In comparison, the US and Europe’s revenue has remained flat at roughly $11 billion and $10 billion, respectively, during the same period. In fact, Asia has generated the highest revenue from ticket sales since 2012, compared to Europe and the US, maintaining their outstanding figures for growth year on year.

According to data from Factset, M&A activity was relatively low in 2020, but spiked in 2021, with the volume of deals increasing from $12.7 billion to $81.3 billion during the last two years. The number of deals was only 50% higher in 2021 though, indicating that the average deal size increased considerably, as key shifts are happening in the industry.

Nowadays, the movie industry is facing a new challenge as we dive deeper into the digital era. Streaming services such as Netflix give access to a broad catalog of movies and TV series that we can watch anywhere, from any device. In a sense, digitalization is achieving what television tried to do in the ‘50s, providing a similar experience to cinemas from the comfort of our home. The narrowing difference between the home and cinema experience, should be a signal that radical change is coming, and we might be seeing the beginnings of that, as tech giant Amazon is establishing themselves in this industry.

Amazon.com is a vast Internet-based enterprise that sells books, music, movies, housewares, electronics, toys, and many other goods, either directly or as the middleman between other retailers and Amazon.com’s millions of customers. Its Web services business includes renting data storage and computing resources, so-called “cloud computing,” over the Internet.

Amazon was founded by Jeff Bezos from his garage in Bellevue, Washington, on July 5, 1994. Initially an online marketplace for books, it has expanded into a multitude of product categories: a strategy that has earned it the moniker The Everything Store. It has multiple subsidiaries including Amazon Web Services (cloud computing), Zoox (autonomous vehicles), Kuiper Systems (satellite Internet), Amazon Lab126 (computer hardware R&D). Its other subsidiaries include Ring, Twitch, IMDb, and Whole Foods Market. Its acquisition of Whole Foods in August 2017 for US$13.4 billion substantially increased its footprint as a physical retailer.

Amazon has earned a reputation as a disruptor of well-established industries through technological innovation and mass scale. As of 2021, it is the world's largest Internet company, online marketplace, AI assistant provider, cloud computing platform, and live-streaming service as measured by revenue and market share. In 2021, it surpassed Walmart as the world's largest retailer outside of China, driven in large part by its paid subscription plan, Amazon Prime, which has over 200 million subscribers worldwide.

Amazon also distributes a variety of downloadable and streaming content through its Amazon Prime Video, Amazon Music, Twitch, and Audible units. It publishes books through its publishing arm, Amazon Publishing, film and television content through Amazon Studios.
​
This has resulted in an incredible growth in the last 10 years making Amazon the fifth biggest company with a market capitalization of $1,723 bn. ​ 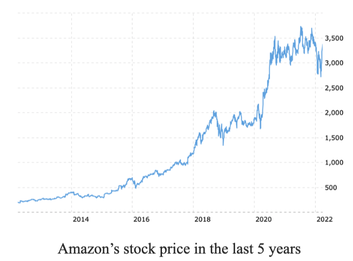 Metro-Goldwyn-Mayer Studios Inc. (also known as MGM) is an American media company, founded in 1924, that produces and distributes feature films and television programs. It is based in Beverly Hills, California.

In 2010, MGM filed for Chapter 11 bankruptcy protection and reorganization since it became clear it could no longer afford to service its $4bn debt burden. Later that year, after reorganization, MGM emerged from bankruptcy under the ownership of its creditors by transferring its creditors' $4 billion debt into ownership. MGM's creditors control MGM through MGM Holdings, a private company.

Two former executives at Spyglass Entertainment, Gary Barber and Roger Birnbaum, became co-chairmen and co-CEOs of MGM's new holding company. In 2020, with Barber having left MGM, it began looking to be acquired by another company in order to pay its creditors.
​
The history of the company and the rich content catalogue made it very attractive to Amazon which is trying to win the streaming war against other big players such as Apple, Netflix and Disney. 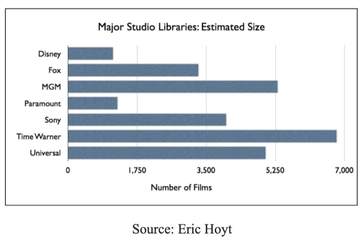 Amazon has closed its $8.5 billion acquisition of MGM first announced last May after US and European competition regulators declined to block the move, despite growing concern over the ecommerce giant’s size. The deal represents Amazon’s largest since the $13.7 bn purchase of Whole Foods in 2017 and the latest signal that the firm is willing to heavily invest on content for its streaming service.

The real financial value behind the deal may not only MGM’s catalogue but also the access to ancillary intellectual property rights and remake rights to thousands of titles such as the James Bond series, Rocky and Creed franchises, 12 Angry Men, Tomb Raider, The Pink Panther, just to name to a few. ​

Did Amazon overpay the purchase of MGM? In order to correctly answer to this question, it is necessary to analyze previous similar M&A deals in the media sector.

As previously said, from this transaction, Amazon will receive a large library of content, with more than 4,000 film titles and 17,000 TV episodes, including the most famous James Bond franchise which counts 25 movies.
​
However, MGM is not the only owner of the rights to the James Bond franchise but shares the ownership with the Broccoli family which controls the creation of new content. 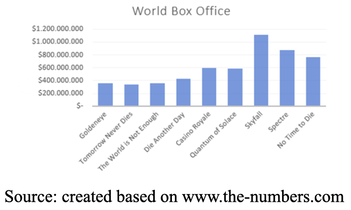 The 25-movies-long franchise has grossed $7.9 billion at the box office worldwide, with a total production budget of 1,8 billion and an average box office receipt of $728 since 2000.
​
The table below shows some of the most important deals that have occurred in the media sector since 2006 and their valuation in terms of Transaction Value/Revenue and Transaction Value/EBITDA multiples. ​ 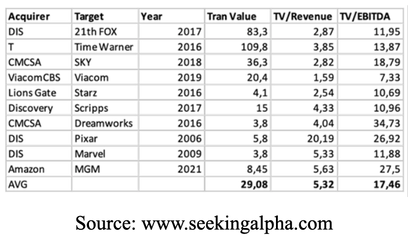 The purchase of MGM represents the second biggest transaction in the industry in the last 15 years in term of Transaction Value/Revenue multiple with a value of 5.63. According to the EV/EBITDA multiple, the Amazon-MGM deal is also the second most expensive transaction. That raises questions about a possible overvaluation of MGM.

MGM Holdings reported total 2020 revenue of $1.50 billion, down 3% from $1.54 billion in 2019. The decrease is mostly caused by the pandemic which prevented the studio from debuting any big-screen titles in 2020.

Nevertheless, MGM managed to grow its profits by the end of 2020, likely due to the strength of its streaming platforms partners that saw big viewership gains during the pandemic.

These numbers lead to an average revenue level in the last 3 year of $1.52 billion.

If we remove the outliers from the previous table and calculate the average for each multiple, we’ll find a value of 3x for EV/Revenue and 12 for the EV/EBITDA one.

Even considering the forecasts for MGM’s EBITDA in 2022, expected to be in the range of $500 to $550 million (mainly thanks to release of the latest James Bond movie) the target price for the firm would be around $6.1 billion, which, leads to the conclusion that Amazon may have overpaid MGM.

MGM has increased its debt faster than its revenue in the latest years. Its pre-acquisition debt was $2.41 billion. Its growth was caused by 2 causes: firstly, its acquisition of streaming platform EPIX in 2017 (as can be seen from the spike in debt in 2017), and secondly content investments, particularly in television.

Between 2017 and 2019, the company increased the number of shows it delivered from 21 to 41, or 496 episodes to 792 episodes. That included acquisitions of Evolution Film & Tape Inc., which carried the rights to The Real Housewives franchise; and Big Fish Entertainment LLC, which included the rights to the "Live P.D." series.
​
Amazon will certainly need to strongly decrease MGM's debt in the coming years. It could achieve it by selling off some of its lesser-known franchises which likely will not have prospects for popularity or continuation. 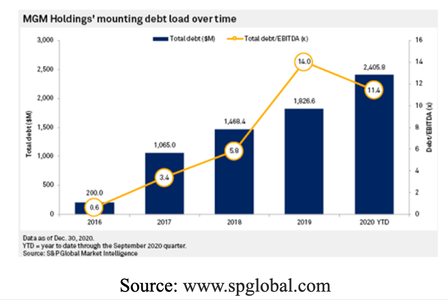 The most striking example of content scalability at the moment is the Marvel cinematic Universe (MCU) which, starting from a single movie has grown to 28 films which brought in more than $25 billion at the box office. Even though the revenue split to cinemas and the parent company is roughly 50-50, this is still an excellent business, considering that Disney Acquired Marvel for $3.8 billion.

If we consider MGM’s franchises, however, it seems that its franchises will be much harder to scale. The only successful ones may be the James Bond and Tomb Rider series. However, since MGM does not completely own the rights on the first one, Tomb raider remains the only franchise the company can rely on to push out merchandise or games.

To conclude, this acquisition will give Amazon a substantial leg up in the streaming war by allowing them to extend their catalogue, so as to increase the appeal of their streaming platform. This will let them be more competitive, also considering the push on the production of original content which is becoming more common in the industry. The deal will also help MGM recover from its troubled financial history, that the pandemic made even worse, since Amazon has plenty of cash available. It will be interesting to see how Amazon’s position in the streaming war will evolve, since this deal may give it a considerable edge against its rivals.  ​