Recently, following Brexit, Amsterdam has been the main spotlight as the new ‘alpha’, replacing London for the title of the major venue regarding stocks. While it can be debated that this is nothing but a matter of perception, this is a concept that heavily gravitates around markets. It is a quite notable shift in European rankings, considering the fact that Amsterdam was barely competing for fifth place just two months ago, lagging behind other metropolitan cities such as Paris, Frankfurt and Milan. It is nevertheless a flabbergasting up rise that has left many to question the reasons behind it.

In order to thoroughly answer this question, some context needs to be given. As a matter of fact, in the beginning of the 1600s, Amsterdam was indeed the financial center of the world. It was the famous Dutch Golden Age, when the Netherlands thrived in aspects of culture, commerce and science, being the pioneers of their time and having their customs and practices followed throughout the rest of Europe. The exchange consisted of a small building located at the River Amstel, where merchants from all around Europe would meet to conduct business. Partnering Amsterdam was London who had also developed pioneering innovations in the departments of finance which allowed them to flourish and expand their economy in a significantly faster pace in comparison to other competing European countries; and by the 1700s a bilateral relationship had organically emerged from the two banking superpowers allowing both parties to rise at even more efficient levels and co-dominate over the European markets. However, with the turn of time and due to external shocks originating from the revolutionary movements of France and the USA, this bilateral relationship was slowly eroded, thus leaving London as the dominant financial center of Europe.

Now, to more recent times, following the ‘Brexit effect’ the Dutch had a big opportunity to step in the market. The capital of Amsterdam has already been chosen for a number of high-profile listings. Furthermore, it achieved its first place as the lead venue of European share trading in the first month of 2021 according to Cboe Global Markets Inc. Amsterdam’s drastic popularity stems from the Brexits contingency plans, thus leaving Amsterdam as the most popular choice from both the London Stock Exchange Group as well as Cboe as the new site that will host EU share trading. From the moment the Brexit deal disclosed not including any sort of financial services, Amsterdam’s share volumes reacted with an instant spike upwards. 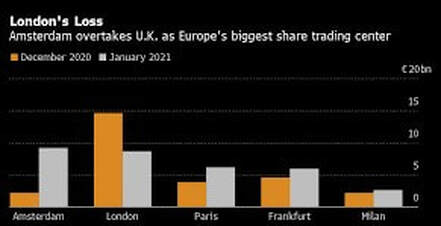 Source: Bloomberg
Regarding some hand-on examples, Media giant Vivendi is in fact considering demerging from its British partnering record label Universal Music Group and transferring into partnering Lionel Laurent with a rival listing, rumoring to withhold a thirty-six-billion-dollar valuation. Furthermore, luxury-goods multi billionaire Bernard Arnault, past Uni Credit board director Jean Pierre Mustier, as well as asset manager Tikehau Capital SCA are together looking to acquire a Dutch corporation in with a purpose to tackle fintech and similar financial firms.

However, it is debated whether it is also a matter of the Dutch benefiting from their historical ties with the British, leaving them as the rightful successor in the instance of the UK leaving their post. To further reinforce this movement, the business climate seems to be very welcome there in comparison to other European choices. The Netherlands’ soft tolerance over dual class voting structures is one of many factors.

This means there are two different classes of shares whom have disparate voting rights. Therefore, founders and other shareholders have the ability to maintain voting control of the company through holding shares that have augmented voting rights in comparison to the shares held by public shareholders. Since these types of shares that provide the extra voting rights most often cannot be traded, this system provides a proxy loyalty contract with the company and provide for more long-term stability. Hence, company performance tends to benefit a lot from the existence of the dual voting system, and in a time of ‘instability’ for the financial sector it provides for a very attractive alternative.

While none of these factors discussed so far singlehandedly determine Amsterdam as the dominant location of Europe’s new financial hub, the current total components provide for a very good case for Amsterdam being the new financial center.
​Nevertheless, the recent stock offerings provided for a momentum that Amsterdam has a very solid situation to build on. The competing European financial candidates will need to act rapidly and provide their perspective as the change is occurring in a very short transitioning period, and with COVID-19 being on the table, it will be significantly harder for them to pitch their dominant viabilities. As for the British policymakers, the instant change is also becoming increasingly clear. They need to adapt or else they are facing danger of having to relocate their business elsewhere.