On March 6th, Mizuho Bank announced a $6 bn impairment loss, in part deriving from a 1.5 Billion loss registered in its fixed income securities portfolio. Mizuho stocks plummeted from ¥175 to ¥172 (-1.7%) the following day and it is currently trading around ¥170 (figure 1). This write-down announcement has anticipated the release of 2018 final financial figures and it will slash 85% the bank’s previous net income estimates, now attesting around ¥80 Billion ($700 Million). 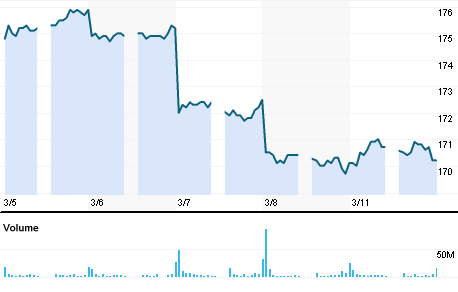 The biggest part of the write-down derives from its internal software. The company has, in fact, heavily invested in its software package both for its retail customers and its internal trading platform. Lately, Mizuho has seriously struggled to create an effective ground-breaking trading platform in order to remain one of the main global players in derivatives products. Unfortunately, this renovation has already caused several breakdowns of its ATMs and brokerage systems, and the foreseen investments in coming years will result in higher operational risks without taking into consideration the side effects that could emerge.