An overview of Brazilian economy

Brazil has been for years considered an emerging markets, pursued by investors for the possibility of high returns, as they often experienced faster economic growth measured by GDP. But now the situation has completely changed. Brazil’s economy is facing its worst decline for quarter of a century last year. Its GDP fell 3.8% in 2015, which is the sharpest drop suffered since 1990, when the Latin American country was going through the issue of hyperinflation. Also for this year the expectations of financial analysts cannot be considered good because it is estimated that GDP could still decline by 3%. 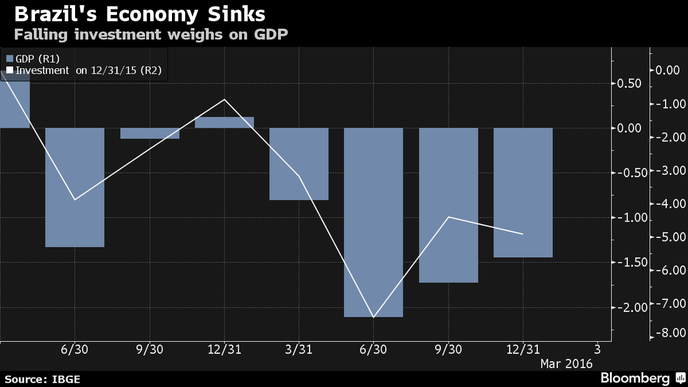 To understand the reasons of the decline we have to go back to the beginning of the century. Brazil had a rapid growth since 2000 conquering the leadership of South America thanks to Argentina’s weakening, its traditional rival. In a few years, however, it has become a global power, and together with China were considered “the countries of the future”, those on which many investors have decided to put money on. The factor of this success can be found in a system based on exports of increasingly high prices in commodities, which allowed to gather huge resources with which to finance generous social and redistributive policies, which have stimulated the domestic market.

Despite all this period of strong growth, Brazil didn’t benefit of the richness generated to restructure its economy, create the needed infrastructure, investing in human capital, increasing productivity and the global competitiveness of country's system. The government considered that using public leverage to stimulate private investment consumption would naturally have followed. It did not happen. The result is an inflation caused by demand, due to the shortage of products.

Moreover in the last years commodity price which Brazil’s economy was mostly based on collapsed and they have thus had an important effect in the slowdown they are suffering right now. Just think of the two main goods exported by Brazil, raw materials and soy. In the first case the price has fallen from 180 US $ / dmt in 2010 to around 40 US $ / dmt in April 2015. Regarding soy, the fall was nearly 32% last year. Also the oil price had a strong impact in the slowdown. It went from over $ 100 a barrel to less than $ 40 in about a year, creating problems to the state oil company Petrobras, engaged in the exploration of ultra-deep deposits of the Pré-Sal, which require a minimum oil price for barrel of above $ 70 to be profitable.

In this quite complicated situation there are also political issues not to make the recovery easy. The current president Dilma Rousseff is fighting against impeachment charges about the huge corruption scandal linked to the state oil giant Petrobas that I mentioned before, whose Rousseff has been CEO for some years. According to the accusations, the managers of Petrobras inflated contracts to build oil infrastructure and earn at least $ 800 million. The money has been used in part to finance the election campaign of the Workers' Party, which has ruled the country since 2003. The climate of insecurity dictated also by this unstable political situation made investors stop investing because there was no more certainty of a positive return.

The situation seems quite a disaster for their economy with rating agencies also declassifying Brazil to a junk country, so you maybe won’t believe to what is next in this article. Do you know which is the stock exchange which has had the best performance this year so far? Yes it’s the Brazilian one. In the first three months of 2016 its value raised by 20% as you can see from the chart below, which is a great result compared to the 1,67% of Wall Street and the -10,5% of the European indexes.

Next question now is why should people invest their money on Brazil despite the "warnings" launched by the International Monetary Fund and by virtually all analysts on the high-risk of the country? After the violent beginning of the year, commodities have recovered some value, thanks most of all to the stabilization of the dollar. This effect has attracted the attention of investors who were seeking for some performance after they decided to abandon European investments due to a global uncertainty. Therefore the movement of capital to the Brazilian market has helped the stock index return to rise despite the economy going in a completely opposite direction. Will stocks in Brazil keep rallying? It all depends on commodity prices trend, and on how fast or slow the impeachment of president Rousseff goes.

Moreover in some months Brazil will be the center of the world since the 2016 edition of the Olympic Games will be held in Rio. They were awarded in 2009 when the country was experiencing a completely different economic situation which is making it much more difficult to organize them in an optimal manner. The organization of such a big event had the intention to show the prosperity and the development and to promote Brazil in the international community. But with the economic crisis and the negative expectations, Rio 2016 Games risk to create more problems in the country, who will not have the positive economic effects as foreseen by the organizers and in this occasion the Greek example of Athens 2004 is not helpful.