Antitrust laws: is this the end of FinTech monopoly?

According to Morgan Stanley, the competitive environment in China has intensified over the years and tech giants continue to fend off new rivals that are taking away portions of their market share. For this reason, China’s bureau for regulating monopolies — the State Administration for Market Regulation (SAMR) has approved to stop anti-competitive practices in the internet sector.

The reason why these new antitrust laws focus their attention mainly on Tech companies is their increasingly strong influence on people’s daily life in China. The main aim of these laws is to protect fair competition in the market and safeguard consumers’ interest. However, the implementation of these regulations has already had negative implications for major Internet companies with dominant positions across segments.
​
On the 11th of November, Chinese technology companies have lost around $290bn in market value. In particular, both the ChiNext index in Shenzhen, that comprises the 100 largest and most liquid A-share stocks, and Shanghai’s Star 50 index dropped by three per cent. Moreover, the drop of Chinese tech stocks spread out to Hong Kong, where the Hong Kong-listed shares in Alibaba dropped 9.8 per cent, cutting $117bn off the company’s market capitalisation. A similar drop affected its rivals Tencent and JD.com that fell during the same period by 11.4 per cent and 17.2 per cent. 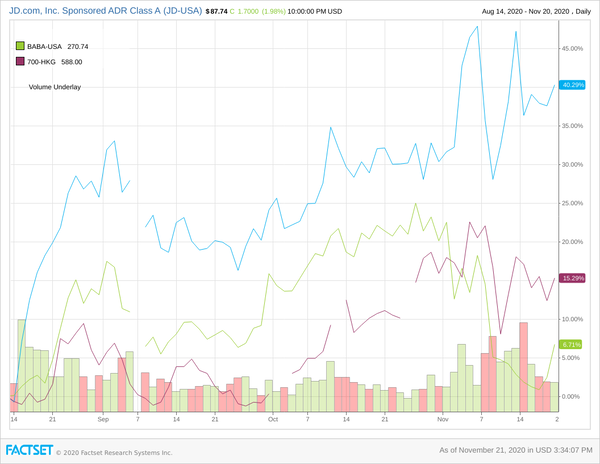 One of the main problems under Chinese regulators’ crosshairs is the presence of high barriers that tech companies have erected around their businesses.

For instance, the popular messaging app WeChat owned by Tencent does not allow its users to share videos from Douyin, TikTok’s sister app, or to click on links connected with products on Alibaba’s Taobao ecommerce site. Shoppers who purchase goods from Alibaba sites, such as Taobao or Tmall are not allowed to use WeChat Pay, the payments service owned by Tencent that is a rival to Alipay, run by Ant, Alibaba’s sister company. On the contrary, JD.com, China’s largest online retailer partially owned by Tencent, does not accept Alipay as a form of payment.

Wang Qingrui, an internet analyst in Beijing, commented this situation explaining that tech companies nowadays regard their customers simply as assets impeding other platforms to access them and this strategy may be regarded as abusing market dominance.

Alibaba has nearly 60 per cent of the local ecommerce market and dominate nearly three-quarters share with its smaller rival JD.com. Alibaba is the China’s biggest ecommerce platform and this year the orders exceeded a record $56bn in the morning alone: a fifth of the country’s consumer goods are now sold on Alibaba. Normally, their share price would have reflected that retail frenzy. Instead, the reaction to Chinese regulators’ plans to create a new norms, has caused a 10 per cent drop 10 per cent. Furthermore, Alibaba’s share price has been hit since last week Beijing suspended the $37bn initial public offering of its payments and lending affiliate, Ant Group, and announced draft new antitrust rules for online groups.

The new restriction would affect Alibaba mainly over its use of customer data from online search and shopping activity. For instance, online advertising is a key revenue source for Alibaba. Analysts estimate ads account for nearly half of its top line. Limitations could curb profits from auctions of popular search keywords to sellers on its ecommerce platforms and its lucrative targeted ads — including product recommendations. Growing controls over the use of customer data could blunt Alibaba’s edge over rivals. 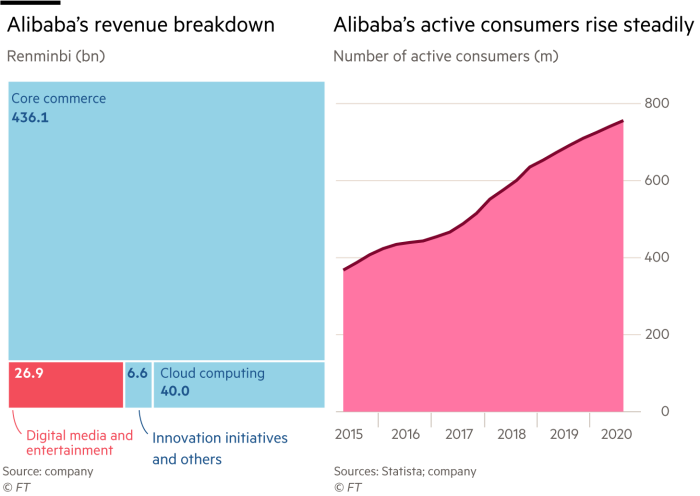 Conclusions
Beijing’s power game against its fast-growing tech giants has just begun. Further restrictions, such as those governing broader internet transactions, are expected by next June.

The managing director of pan-Asia internet research at Citigroup, Alicia Yap, explained that antitrust rules could limit targeted ads and product recommendations adopted by the majority of  ecommerce platforms.. These actions from Beijing  are made to alert all the big companies to respect watchdogs’ rules regardless of the company’s size: everyone must fall in line with directions from the authorities.

However Shanghai’s traders are sceptical these new rules would have a dramatic impact for China’s most successful companies. The new proposed regulations will not have as much impact on the e-commerce giants today as it happened years ago due to the fact that competition has already intensified in recent years, thus, in a market where no firm has a crucial cross-segment supremacy, the implications will necessarily be less intense.