Are we entering a new commodities super-cycle? The case of the iron ore

Iron ore is one of the most commonly traded commodities around the world and is the core fuel of both Australian and Chinese economy which are the biggest producer and buyer respectively. Iron ore is so important because it is the main raw material needed to produce steel which is the base material for any industrial economy and is particularly important for emerging economies like China which is by far the largest steel producer in the world.
Iron ore prices rallied more than 100% from the bottom price of $40/ton hit at the beginning of 2014 when fears of a Chinese economic slowdown were at the highest pushing down prices of basic materials like copper, zinc and iron in a negative commodity cycle which now appears to be over. China demand for iron ore demonstrated to be strong even if the country is growing slower than the double-digit growth which investors began to get used to see in past years. Furthermore, mining companies began huge disinvestment strategies to reduce offer to sustain the price of the commodity which risked falling too close to mining cost.
At the beginning of 2017 iron ore was trading above $80/ton and peaked at $95/ton in mid-February boosted by the Trump euphoria which affected the commodity market since the US elections on November 11. Some analysts then started to point out that these prices were too high and if there would not be a pullback Chinese steel mills would start to use lower quality ore from Chinese mines, instead of the Australian high-quality one, triggering a shift of suppliers. 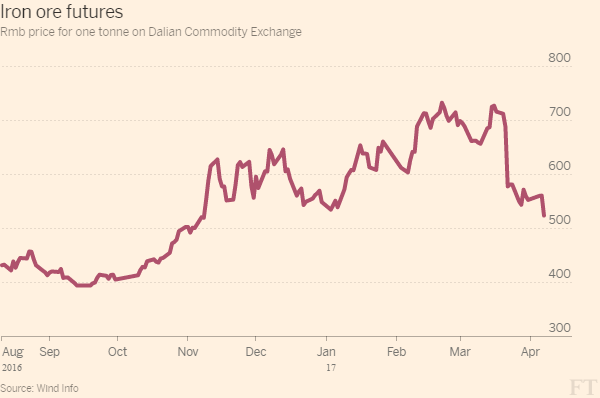 In mid-March iron ore futures prices at the Dalian Commodity Exchange started to collapse driven by a continuous increase in iron stockpiles, which topped 132 million tons highest level since 2004, and incoming increase in supply. Iron ore traded in China entered the bear market on April 7 having dropped more than 20% since the Rmb 738 top hit on March 16. The collapse also affected related commodities like carbon coke which is widely used to produces steel in China.
Analysts at Bloomberg pointed out a common problem which is affecting the commodity markets around the world from oil to copper and iron ore: there is a mismatch between the financial market and the physical market. We saw iron ore prices rallying only because there were renewed hopes of an acceleration of China’s economy but stockpiles continued to grow and supply continued to exceed demand. Australia’s central bank and many miners warned that prices were unsustainable and say that iron ore may revisit the $50s in the months to come.
We are seeing a similar situation in the oil market. WTI crude oil rallied from the bottom of around 25$/bbl hit at the end of 2016 but there are not signals of an improvement of the condition of the physical market as stockpiles are continuing to rise, supply has been cut smoothly and demand is stagnant. Similar is also the condition of other commodities like copper.
The sharp decline of iron ore prices is putting under pressure mining giants like BHP Billiton and Rio Tinto which are world’s most important producers of industrial commodities. Australia is by far the biggest mineral exporter in the world and is widely exposed to the commodity trend, the Government sees prices around $50/ton at the end of 2017 which could cause a decrease in mining investments triggering an economic slowdown of the country. 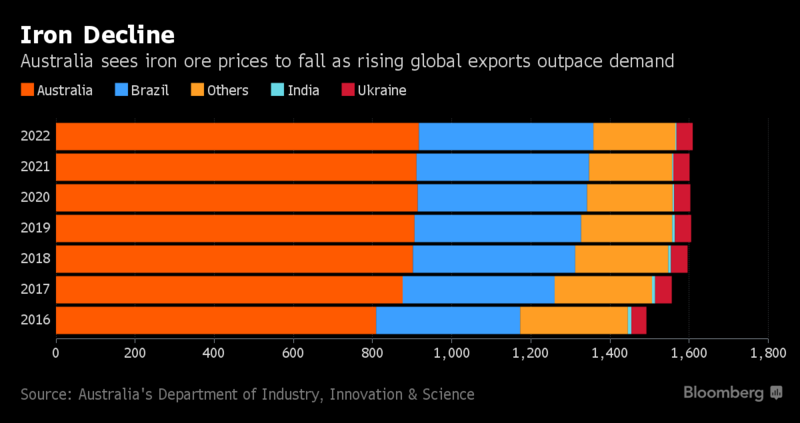 What we know for sure is that the industrial commodity market is China-centric, what really drives industrial commodity prices is the Chinese locomotive. China’s booming housing industry is absorbing most of the steel production of the country and many other materials like copper and concrete. The Chinese Government, which is starting to look at the overheating housing market with fear, launched a tightening of building permits and a rise in financing cost for construction companies trying to cool down housing before the bubble bursts. The Chinese housing policy tightening is spreading fears among miners and investors, some thinks that a commodity super-cycle just ended and we are entering in a downturn phase again but there is much uncertainty among these themes and no one exactly knows what is going to happen to the commodity market in the near future. While I am writing this article Iron ore is down more than 8% on the Chinese market.
​
Tomaso Giorgi