​Are we entering a Private Markets Supercycle?

​The private capital industry is growing rapidly, reaching over $10 trillion last year and expected to grow at a CAGR of 8% even in a bearish scenario. Therefore, as equities and bonds markets find themselves in extremely precarious times, traditional asset managers are racing to expand offerings in alternative investments and grab private capital specialists as they struggle to boost profitability and compete with private equity giants. The article provides an overview of past and future performance of private markets and looks at the factors potentially affecting their growth path.

Private Markets Bounce Back in 2021:

Private markets bounced back in 2021, after pandemic driven uncertainty that suppressed fundraising and deal making. Dealmaking paused briefly during the pandemic but quickly rebounded as PE firms shored up portfolio firms that needed help and M&A activity took off again later that year. This deal splurge has also increased activity in junk bonds and leveraged-loan markets.
Fundraising reached a record $1.2 trillion, up by 20% from 2020, while dealmaking is at record levels, as the global value of leveraged buy-outs reached $1.2 trillion in 2021. Furthermore, total assets under management (AuM) reached an all-time high of $9.8 trillion on June 30 2021.
Growth is buoyed by institutional investors who continue to increase allocations to private markets, at the expense of public markets, due to the private market’s significant outperformance. In particular, given the prolonged low interest rates environment, investors have significantly shifted towards private markets in an attempt to achieve higher returns. 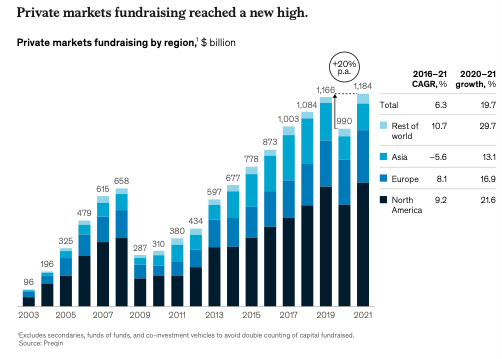 Source: Preqin
The highest performing private market asset class continues to be Private Equity (PE), for the fifth consecutive year. Here, AuM reached new highs in 2021 increasing by 37.7% to $6.3 trillion. The latter was mainly led by the increase in NAV due to higher-marked valuations and led to PE accounting for approximately two thirds of the overall size of the private markets industry.
The major source of growth comes from America where the PE industry continues to supersize as the number of PE funds has jumped to over 18,000, three times what it was a decade ago. 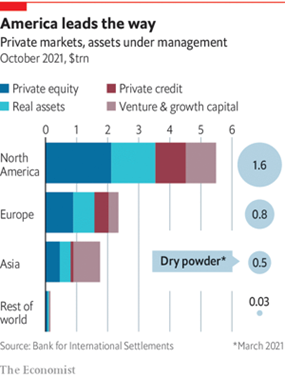 Paragraph. Clicca qui per modificare.
Within the broad PE asset class, also Venture Capital (VC) and Growth Equity experienced a significant outperformance reaching all time highs levels in terms of fundraising. Both of them benefit from an environment where as private markets grow, more firms decide to stay private longer. In particular, the average age of companies at IPO in America was 4 years in the 1990s, but the average since 2001 has been 11 years. As companies stay private longer, more investors are looking to get in on the pre-IPO stage, while other firms decide not to go public at all, confident in their ability to raise enough capital privately. Given these dynamics, tremendous opportunities are generated for both VC investments in early-stage firms and also growth capital to bridge the gap between VC funding and buyout.

​Looking ahead into the future, analysts are cautiously optimistic regarding the outlook of the private markets industry. Preqin, a London-based investment data company focused on the alternative assets market, predicted that the industry may grow to almost $18tn by 2026. On the other hand, the more optimistic “blue-sky” scenario suggested by Goldman Sachs forecasts that the overall size of the industry could swell up to $30 trillion within the same timeframe. This depends on whether it continues to attract retail investors and that interest rates don't go up as much as feared. 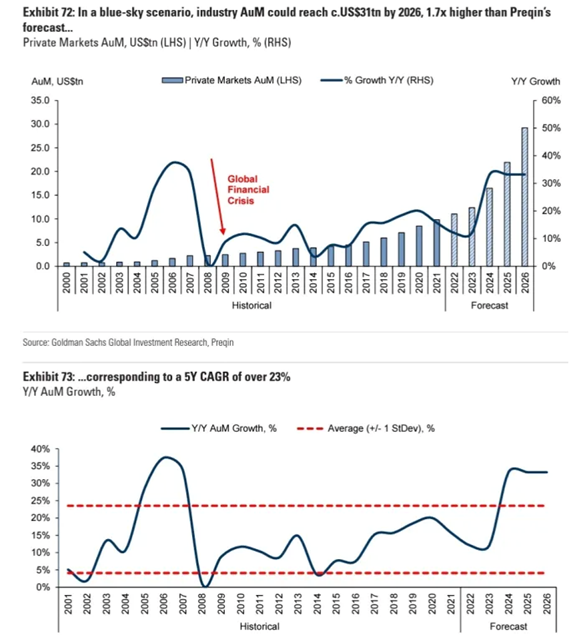 Source: Goldman Sachs Global Investment Research, Preqin
On the other hand, the more cautious analysts have created a ‘grey-sky’ scenario, where  the 2026 industry AuM is forecast to reach $14.8 trillion, reflecting the one achieved from 2008 to 2012 and rising at a CAGR of 8%. This bearish view could be driven by a high spike in interest rates, regulatory constraints limiting institutional investment and a lack of retail investment, which could weigh on growth. 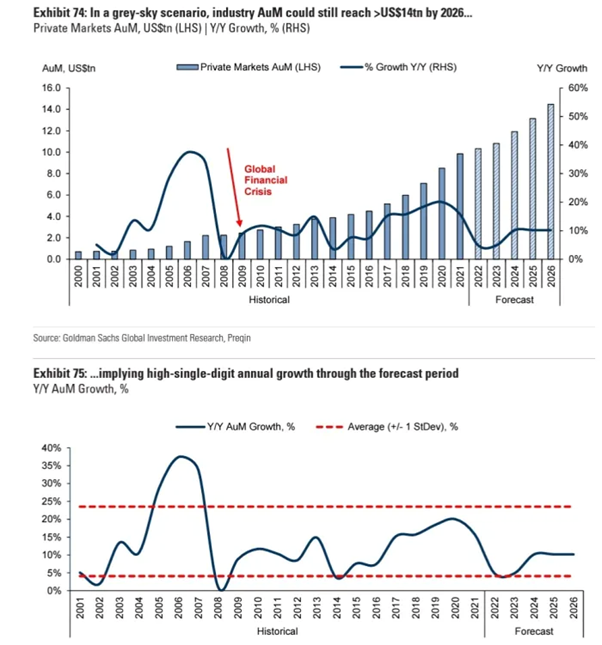 Source: Goldman Sachs Global Investment Research, Preqin
However, the outlook can’t be described as anything other than positive, as private capital is expected to jump to $15 trillion in less than five years even in the bearish scenario. This kind of growth is quite stunning and an apt representation of the level of craziness in the industry.

Among those factors positively contributing to the significant projected growth in private markets it is worth highlighting the following:

Track record
Since the Global Financial Crisis, private market solutions have consistently outperformed public markets. Sharpe ratios for private equity, real estate, and private debt were 2.4, 2.0, and 1.5, respectively, from 2009 to 2011, compared to 1.1 for the S&P 500. Furthermore, since 2010, private equity has outperformed significant benchmarks such as the S&P 500 and the Russell 2000 in terms of absolute annualized returns.

Gap in Current vs Target Allocations
Investors under-allocate to private markets compared to their own goals on a broad scale, with private equity being the most affected.

Growing companies staying private for longer
Companies are remaining private for longer due to regulatory and financial constraints, which could lead to further capital inflows into private markets. Since 2008, private enterprises in the United States (with more than 500 employees) have grown by 11%, compared to a 25% decline in public European/US companies. From 1999 to 2013, the average age of a US tech business upon IPO climbed by c.3x, from 4 to 11 years.

Regulation
The US Department of Labor issued an information letter in June 2020, advising that fiduciaries of direct-contribution pension plans might sell vehicles with a private-equity component. This development is the first step toward what might be a significant tailwind for the TAM of alternatives. Furthermore, huge funding deficits are forcing defined benefit pension systems to invest in private assets in order to increase returns.

Retail Opportunity
If retail involvement in private markets increased from 5% to 41% (i.e., retail exposure to global AM), the additional private market AuM from retail investors would be over $6 trillion (i.e., a 60% increase). Historically, pension funds, SWFs, banks, and insurance firms have been the primary investors in less liquid pension markets. Liquid/semi-liquid structures, such as those that provide monthly or quarterly subscription and redemptions, have lately appeared, making them appropriate for retail investors.

On the other hand, the two factors below are expected to have a mixed impact on the future performance of private markets:

Interest rates
While private market Assets under management demand drops during rising interest rate times (from above 15% to roughly 5% in 2017-19), private investment returns are frequently long-term.
Furthermore, the GS Macro Team expects the medium-term repercussions of these dynamics to be more contained, given potential policy rate hikes to be constrained in comparison to historical levels.

LP Consolidation
Limited partners  are trying to consolidate relationships among fewer managers, and fresh capital inflows will be consolidated into fewer funds, on average.
Only four mega-funds raised 41% of total private equity capital raised in Europe in 2021.

We have seen that even in the worst of cases, the numbers reflecting the future outlook of the private markets industry are impressive and these explain the growth of hype around alternative investments. This hype is the main reason why there has been a rush by nearly every big traditional asset manager to grab private capital specialists in recent years, spanning from those operating in niche areas like private debt or the traditional infrastructure.

Fund managers shifted towards alternative investments in an attempt to boost profitability as alternatives continue to request higher management fees as opposed to traditional funds. Moreover, they also hope to capitalize on the increasing interest from wealthy retail investors hoping to increase diversification in their portfolio and find a more stable source of returns given the very volatile environment for both equities and bonds in the recent period.  In fact, as can be seen from the table below, alternative investments provided the largest revenue pool despite accounting for a small share of assets. 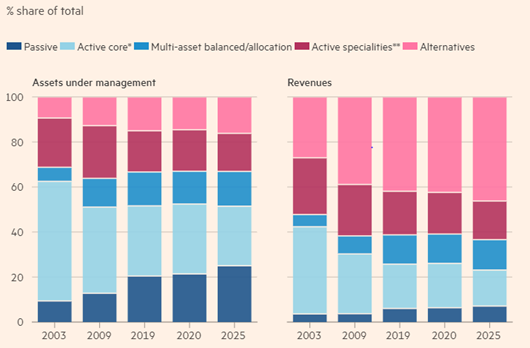 Source: Financial Times
For this reason, an increasing amount of deals have involved traditional asset managers and private capital specialists. Among those, it is worth mentioning that AllianceBernstein announced plans to build its alternative assets to almost $50bn with the acquisition of CarVal Investors. In addition to that, Franklin Templeton expects to top $200bn after it completes its acquisition of Lexington Partners (for $1,75bn) in April.
On the other hand, smaller deals include: Schroders buying Greencoat and Cairn Real Estate; T Rowe Price buying Oak Hill; and JPMorgan Asset Management buying Campbell Global.
However, the above mentioned deals represent just the beginning and there will surely be more new acquisitions like these within the longer term in what looks like a private capital gold rush.

​Private markets experienced a glorious comeback post pandemic and are on track to astounding growth. Even the more skeptical have to admit the potential for tremendous growth, which has been stoked by several factors such as a stellar track record, the tendency for firms to stay private longer, favorable regulation, apt retail opportunity, and much more. Indeed, it must be noted that nearly every traditional asset manager seems to be rushing to grab private capital specialists. Thus, the private markets industry is experiencing what can only be called a massive supercycle.