Are we looking at another
​dot-com bubble?

Almost a year after the outburst of the Covid-19 pandemic, the US stock market is well over pre-Covid levels. In March, as many countries were enforcing lockdowns to prevent a further spread of the virus, and the first cases of Covid-19 were detected in the United States, the Dow Jones Industrial Average lost around 26% of its value in only 4 trading days. Yet, the S&P500, the index which includes the 500 biggest US companies for capitalization, reached the levels of February  already in the middle of August, although at that time the country was still registering more than forty thousand new cases of coronavirus every day. This somewhat unexpected growth is fuelled in part by a small number of tech stocks that are outperforming the market. Companies like Facebook, Apple, Amazon, Netflix, and Google (the so called FAANGs) have done much better than the rest of the market, making some analysts fear the optimisms of investors is fuelled by irrational expectations. The NASDAQ Composite, the index that contains the biggest technology companies of the United States, rose to $11,876 as of Monday November 23rd, almost a 73% increase from the levels seen in March. 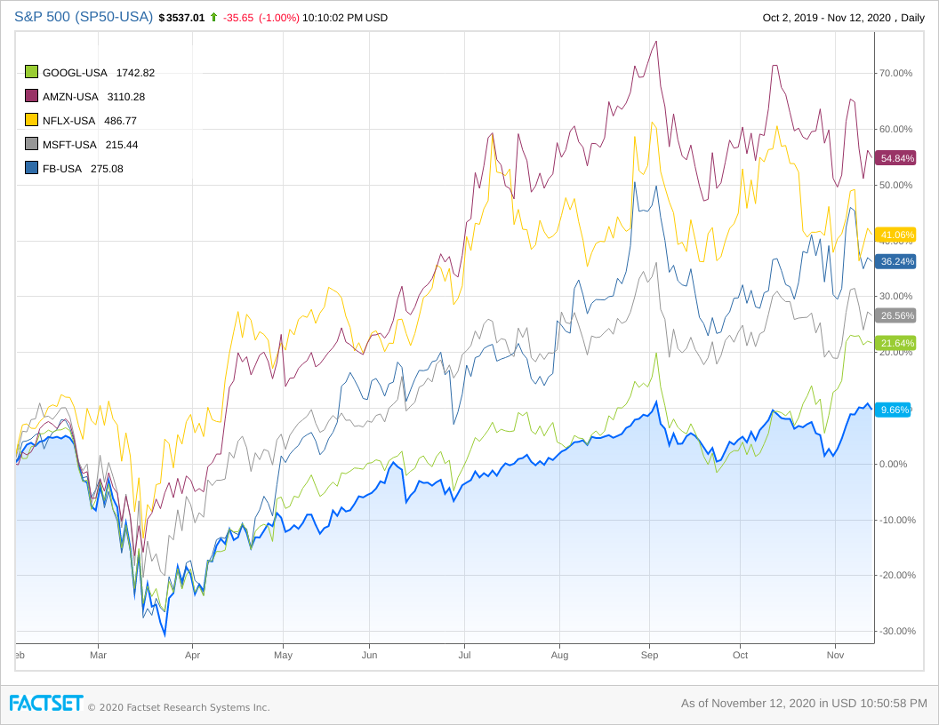 FAANGs outperformed the S&P500 since the covid-19 outbreak.
Are investors being too optimistic?
Market’s optimism regarding the end of the pandemic could be premature. Although a number of companies including the US biotech Moderna and UK’s AstraZeneca announced promising  results from the latest trials on their vaccine, of up to 90-95% efficiency, new cases are still growing in the US and in Europe alike, and many countries, like France and the United Kingdom, are back to a full lockdown. Moreover, the nature of some vaccines, like the one from Pfizer and BioNTech, which requires to be stored at -80C degrees, raises logistics concerns about its distribution around the world. For many experts, we will not go back to normal before 2022.
The excitement regarding technology companies is clear when we see how these companies have been at the centre of a wave of IPOs never seen since the dot-com bubble. By September 23rd, IPOs in the US had raised $95.51bn, more than what had been raised in the same period back in 2000. Data-warehousing company Snowflake raised $3bn in September, while Chinese fintech company Ant Financial is on route, notwithstanding regulatory impasses, to raise more than $30bn, making it the biggest IPO ever. Apart from the excitement behind tech companies, which is in part driven by the optimistic expectations on the sector as a whole, the numbers tell a different story. Some of the hype surrounding tech companies may be in fact unjustified. In 2019, proceeds from technology IPOs accounted for more than a third of the total in the US, while the average post-IPO return in the next year was -4.9%, compared to more than 30% for healthcare and financials sectors.
On the other hand, Chinese technology companies are becoming more and more the target of foreign investment. In comparison with the US, China’s higher predicted GDP growth (according to the IMF, the country’s GDP will grow 1.9% in 2020 and speed up to 8.2% in 2021), less strict regulations and fast recovery from Coronavirus could shift the interest of many investors towards Chinese tech companies. The recent RCEP (Regional Comprehensive Economic Partnership), the trade agreement signed in Hanoi on November 15th that covers 2.2 billion people with a combined GDP of $26.2 trillion, could mean that the excitement about US technology sector could quickly fade out.

Can this trend continue?
The real threat to the tech sector will come after the pandemic is over. Will people still use Zoom and Amazon so much when life goes back to normal? Some things have for sure changed: smart working is now much more common all over the world and will still remain an option for many people even after Covid-19 has long been defeated, just like shopping and attending events online. Nevertheless, the surge in internet usage will fade away as in-person activities start again.
Another issue regards regulation. It is no mystery that a small number of big players in the tech market, especially in social media, hold most of the market. This has not been ignored by regulators: according to the Financial Times, the EU is drafting new laws against Big Tech, in an effort to go beyond simply fining the companies (the Commission fined Google $1.7bn for abusing practises in online advertising in 2019) and curb their market dominance. In the United States, the Department of Justice has filed a complaint against Google for violating antitrust laws. The move comes after Congress’ investigation of Amazon, Facebook, Google and Apple in the summer. But while in Europe a regulation on tech seems still a priority, in the US, the election of Biden is great news for technology companies. Enforcing tougher regulation on the tech sector is not a priority in Biden’s political agenda. Contrary to other democratic candidates like Elizabeth Warren and Bernie Sanders, Biden’s campaign’s focus was never regulating technology and social media companies. The new President has said in January, though, that he, just like Trump, has all the intention to revoke Section 230 of the Communications Decency Act of 1996 , but as of now he has not announced any concrete and definite plan to draft new and tighter regulation. Section 230 protects social media like Facebook and Twitter from civil liability in case of third-party content that is published on their platform and is offensive or obscene. Democrats and Republicans alike have advocated revoking Section 230, but for different reasons. While Democrats want tighter regulations that would hold social media accountable for allowing illegal content on their platforms, some Republicans, and in particular former president Trump, feel websites like Twitter and Facebook are biased against right-wing politicians when it comes to removing and censoring content. This is a further source of uncertainty for the tech sector which will have to wait to see Biden’s moves on this issue. If Republicans hold the Senate (we will know only after runoff elections in Georgia in January), or even if Democrats can count only on a narrow majority, other topics will be on the top of the list of priorities for the new President, first of all drafting a recovering plan against the pandemic’s effect on US economy. It is also worth noting that some of the biggest donors of Biden’s campaign were, in fact, technology companies.


This time is different
The incredible growth of the tech sector in these months cannot be easily compared to the dot-com bubble. There are many reasons behind the recent spike in the prices of these stocks. Tech companies have been taking advantage of lockdown measures and consequent higher use of internet services, social media, and smartphones. According to app analytic company AppAnnie, screen time has increased 20% in the US in April 2020 in comparison with the same month of 2019, and the same trend can be seen all over the world. Because of the lockdown measures, many activities are only possible online. Millions resorted to working, studying and even grocery shopping only on the internet.  Naturally, companies which hold a strong share in the market, like Apple, Google and Amazon were able to profit more than others. In June, Apple reported Q3 earnings up 11% year over year, thanks to a double-digit growth in both Products and Service divisions. Google, Netflix, Amazon and Microsoft all registered double digits growth in their revenues in the third quarter as well.
The most important reason, though, regards investors’ expectations, which heavily influence the market for these companies. Contrary to what happened in the dot-co bubble, this time expectations are justified, as NYU professor Aswath Damodaran commented. In 1999, investors bet on the future of the internet industry, which was not yet developed as it is today. Companies like Facebook and Google have billions of users integrated in their ecosystems, profitable and cash generating businesses, dominance on a growing market and access to a vast amount of data.

This article was written using Fact-Set