Lately Italian banks are having troubles because of the huge amount of non-performing loans (NPLs) on their balance sheets. In numbers the threat is worth €360bn, it represents 18 per cent of total loans, almost a fifth of Italy’s GDP. This illiquid asset is slightly a major threat to big banks rather than small local ones. Evidence from a Bank of Italy’s study shows that the “Big Five” Italian banks: Unicredit, Intesa SanPaolo, Monte dei Paschi di Siena, UBI Banca and Banco Popolare hold roughly 65 per cent of the total value of NPLs, being also on average more exposed than smaller banks. 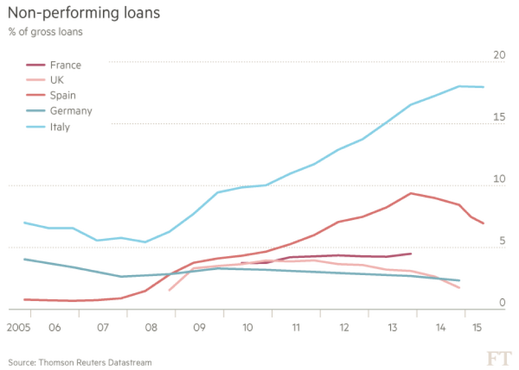 This situation has its roots back in the mortgage backed securities crises in 2007, at that time the situation was not so critical, Italian banks had bad loans on their balance sheets but not of such a relevant weigh. This is the reason why no measure was taken by the government meanwhile Ireland and Spain created a state-backed bad bank. But with the sprawling development of the financial crises and the economic stagnation more and more businesses were unable to pay back their loans.

At the moment the Italian banking system is being made more cost-efficient, for instance several reforms have been approved concerning consolidation and credit recovery. Related to the first issue, within the end of 2016 the ten biggest “banche popolari” have to be transformed into joint stock companies. As for the latter, the government has implemented procedures to speed up bankruptcy proceedings. This is how far public help can reach because the Europian Union prohibits state aid to banks in order to break the sovereign debt-bank debt feedback loop. Consequently on Monday meeting, the last measure which seems it has been arranged, consists of a bank rescue fund, dubbed “Atlas”, backed by large Italian banks as Unicredit, Intesa and UBI Banca among others. Approximately it will be composed by €5bn of equity, and a part of debt, with the aim of buying the shares of distressed small banks as well as the worst tranches of NPLs which are difficult to sell on the market.

Hopefully with this solution Italian banks will regain investors’ interest and stop facing a downturn. So far their shares have been traded at 50 per cent of their book value while the European average is of 80 per cent. 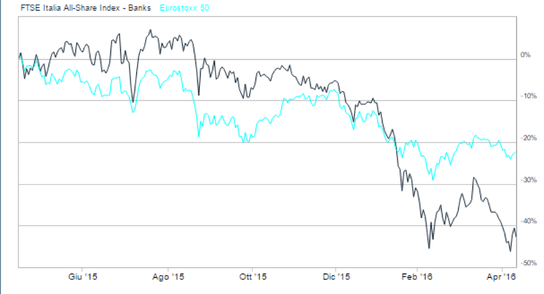