It is no recent news that the telecommunication giant AT&T has sealed the deal to acquire the media and entertainment conglomerate Times Warner. Indeed, the announcement of the deal goes back as far as June 2018 with an overall total transaction value of $108.7 billion including the acquiree’s net debt, price which implied a total equity value of $85.4 billion.

However, it was only recently that the last antitrust hurdles of the deal were cleared, after a federal appeals court ruled in favor of the merger and therefore marked a sound defeat for the Department of Justice. From the moment it was announced, the deal has since been under scrutiny by regulators, who sustain that AT&T would have “both the incentive and the ability to raise its rivals' costs and stifle growth of innovative, next-generation entrants". The court’s judgement, together with the decision from the justice department not to appeal to the Supreme Court, has allowed both companies to finally proceed with the combination of their operations.

The combined businesses pair the millions of AT&T’s pay-television and wireless’ subscribers with Time Warner’s content empire, which includes networks such as TNT, CNN, HBO channel and Warner Brothers’ film and TV studios. From such integrated enterprises, the corporate behemoth expects $1.5 billion in annual cost savings and a further $1 billion in revenues synergies - exploiting progressive revenue opportunities which neither company could obtain on its own. In addition, AT&T aims to collect usage data regarding viewership of the content with the purpose of being able to construct an even more effective digital advertising branch.

In order to reach the objectives above, AT&T has already started to overhaul the operations of the rebranded Warner Media group. In fact, while the three content producers Turner, Warner Media and HBO operated in full autonomy before the deal, the company’s Turner unit has been entirely broken up, with its parts being absorbed by the other two divisions. More precisely, TBS, TNT and other channels will be part of HBO’s entertainment business, whereas Cartoon Network, Adult Swim and their merchandise and licensing units will become part of Warner Bros. Finally, the CNN channel will belong to a newly created sports and news division.

Such restructuring has forced the group’s historic executives David Leavy – former president of Turner - and Richard Plepler – former CEO and chairman of HBO – to step down, while the mainstream broadcaster Robert Greenblatt has become chairman at WarnerMedia. Moreover, the company is offering buyouts to some U.S. Turner employees amid an overhaul aimed at streamlining operations and cutting costs.

AT&T’s decision to take over TW comes at a time where all major players in the media and communication industry are trying to consolidate their positions to face the challenges posed by Netflix or Amazon Prime in the streaming service, as more people move away from watching pay TV. Indeed, Walt Disney $71.3 billion acquisition of 21st Century Fox has combined some of the Hollywood’s best-known characters and studios, putting the foundations for the Disney+ streaming service expected to debut early next year. Similarly, Comcast acquired Sky for $40 billion and plans to launch its streaming channel at the beginning of 2020. Also, Apple has recently announced its Apple TV+ service, which marks the entrance of the Cupertino-based company in a market that will now have several players which provide original content, and at the same time have a global direct-to consumer presence. 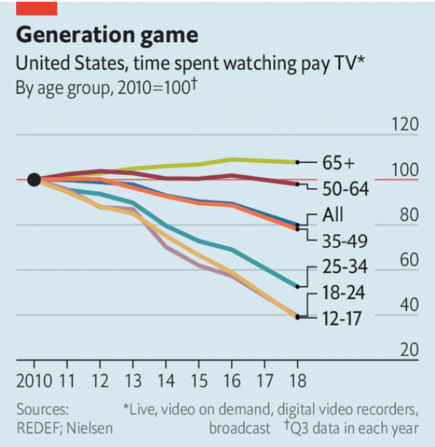 Source: The Economist
The content offered by HBO with big hits such as Game of Thrones and Westworld, together with the Warner Bros franchises including Harry Potter and the DC Entertainment universe, is comparable to both that offered by the incumbents Netflix and Amazon, and to that of the incoming Disney service. Nonetheless, AT&T CEO Randall Stephenson has made it clear that he intends not only to provide premium content, but also to invest in advertising technology and fiber networks to support 5G, so that AT&T can offer to its customers world-class content streamed as smoothly as possible across an incredibly fast connection.

With its acquisition, AT&T has made the final step to become at the same time telecommunication colossus as well as part-media entertainment giant.