Bank of Japan, discovering the limits of monetary policy

The unexpected Trump's victory on November 8th has generated sharp movements in financial markets worldwide. Investors are now betting that he might actually revitalize American economy, leading to a rise in inflation. As they rushed to sell-off assets to buy dollar-denominated bonds, more than $1.2trn of the value of the world’s bond markets was wiped out and bond yields rose worldwide. In Japan, the Yen weakened and the 10-years bond yields reached positive values for the first time in almost two months. 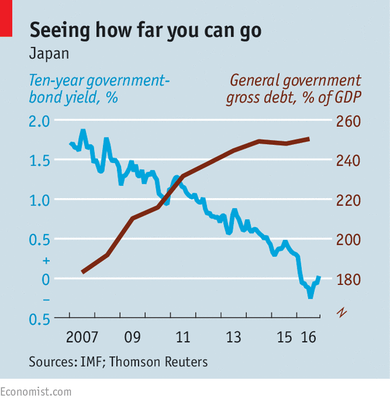 Haruhiko Kuroda, governor of the Bank of Japan (BoJ), has been fighting since 2013 to handle the prolonged deflation which has deeply debilitated Japanese economy. No doubts that he was not happy with bond yields on the rise. During his mandate, BoJ has been diffusely printing money to buy government bonds (JGBs). In 2014, it expanded its QE program from ¥50trn to ¥80trn ($712bn) a year and, today, it owns around 40% of total JGBs market. In addition, in February 2016, the benchmark rate was cut to -0.1%. On September 2016, in an attempt to halt speculation about the BoJ softening the aggressive easing, Mr Kuroda said he would keep ten-year JGB yields at around zero until inflation overshoots its target rate of 2% for an unspecified period. Deflation has led people to postpone spending and businesses to postpone investments, generating a self-reinforcing deflationary cycle. Almost four years have passed and the 2% inflation target seems more distant than ever.

Mr Kuroda blames falling oil prices and weakened emerging markets. Internal factors are also an important part of the picture. Despite Prime Minister Shinzo Abe’s repeated exhortations to raise wages and despite the record ¥242trn in cash and deposits held by corporates in Japan, wages in the country are stagnant, further depressing consumers’ confidence and spending. Demographic trends also play a role: Japanese population is ageing and shrinking: it has been estimated that workforce could decline by 40% by 2060. At the same time, public debt is 246% GDP, the highest proportion worldwide.

Truth is, Japan is still waiting for the deep structural reforms long promised by Mr Abe to revive Japan's languishing economic growth, including increased female labor-force participation and changes to immigration rules. Japan Airlines (JAL) chief financial officer Norikazu Saito told CNBC “This country needs deregulation in every area, especially labor restrictions", adding that Japanese companies are open to the idea of a more diverse labor force, highlighting JAL's move to build a larger female employee base. When it comes to wage stagnation, Mr Saito thinks that Japanese corporations “[are] making profits but [are] maybe not paying enough wages as they are worried about the future as well".
​
Self-reinforcing cycles are hard to break and, given the current situation, it will be interesting to how far monetary policies alone can go.