​Barclays sells its African branch to cope with capital requirements

Early this month Barclays has sold 12.2% of Barclays Africa, about one fifth of its holding. The British company is trying to exit the African business after more than 100 years of presence in the continent. The divestiture is part of Jes Staley’s plan to overhaul the UK based bank by boosting its Tier I capital. The sale price was 126 Rand per share valuing the stake at $879 millions. People close to the bank state that the sale allowed Barclays’s Tier I capital to increase by 0.1%. 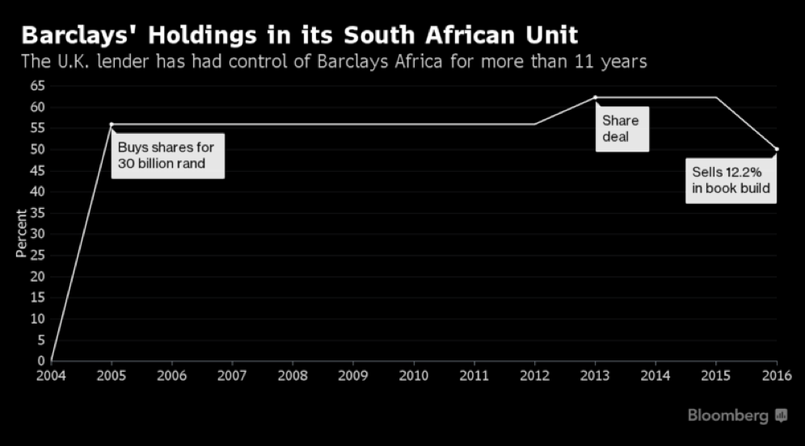 The main buyers of the shares where South African investors as well as UK and US ones. In particular, 40% was allocated to South African private investors and money managers while the rest was split 20% and 40% between American and English investors respectively. Most of the buyers already possessed a stake in the African bank but new shareholders are coming in as well. Overall the placement was 3.5 times oversubscribed showing a high interest for the security despite the worsening economic conditions of South Africa.

The sale has brought Barclays’s stake down to 50.1%. The bank aims at taking down its position to less than 20% in order to deconsolidate the bank from its balance sheet and improve its capital requirements. The English lender has also received many offers for a controlling stake, the most notable one by its former CEO, Bob Diamond. Together with the US based private equity fund Carlyle, he formed a consortium of investors to make an offer. The rationale behind the bid was that of combining Barclays Africa with Diamond’s African Banking company: Atlas Mara.

The takeover was stopped immediately by the South African Central Bank. The country’s law in fact require the approval of the Finance Minister for the purchase of a controlling stake in a bank and a permission from the Central Bank to get over 15% of ownership. The authorities did not want to let one of the most important financial institutions to fall in the hands of a private equity firm and therefore stopped the deal.

In spite of the strict regulation and the need to sell down the stake relatively quickly, Barclays kept did not stop Barclays from leaving space for a controlling stake offer. It is not a coincidence that the UK lender has sold enough shares to leave it with a 50.1% ownership. This move leaves in fact room for possible bids from investors. Of course, the regulation and the recent performance of the Bank in the South African stock market make the company not appealing but still Barclays doesn’t want to lose the chance. 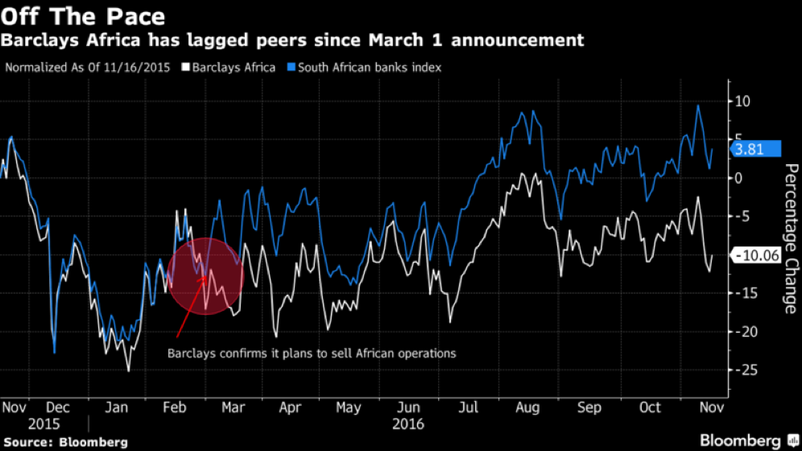 Barclays Africa has been the worst performing bank in the South African market in 2017. Especially after the announcement of the gradual withdrawal of the parent company form the continent, the stock has been underperforming compared to its peers due to the fear of the sale’s consequences. These concerns arose among both customers and employees. Workers were in fact not told before the announcement and they were as surprised as clients as the news came out causing confusion and delivering to the clients the wrong message.

The announcement has in fact caused a backlash against Barclays Africa. Many clients are leaving the firm fearing that it will not be able to sustain the same level of services. Barclays Africa might in fact keep the Barclays name (highly improbable) but the most worrying consequence is the possibility of losing the close tie with the parent company. Barclays Africa’s comparative advantage builds a lot on this relationship; clients are able to get any type of service and can count on the help and support of the UK branch. As instance, Barclays Africa was the most important bank for bond issuance because of its relationship with the English branch. Now that the relationship might be over, the bank is already losing in getting some deals. However, insiders are not worried because they think that even if Barclays UK will decrease its ownership to 20%, they will continue their partnership. If instead they sell the whole controlling stake, the chances of a tight relationship will vanish but still employees believe that Barclays Africa is one of the strongest banks in the African continent and therefore will continue delivering the usual services to its clients.