In a very brief statement on September 19, Airbnb announced its plan to become a public-traded company in 2020. The Company has not specified whether it has already filed its S-1 IPO paperwork - the official document that includes basic financial information that potential investors would need to consider the investment. Before the announcement, Airbnb co-founder Nathan Blecharczyk told Business Insider in a March interview, that the company was taking the necessary steps to be ready to go public in 2019. The Company has not declared yet how it is planning to list its shares. However, according to many market rumors that followed first Reuters insights, it is widely expected that the home rental giant will opt for the direct-listing route.

Unlike traditional IPOs, where new shares of a company are first generated, then underwritten by a pool of selected banks and lastly sold to the public, a direct listing is a process to go public without issuing new shares. In this process, the listed company itself does not initially raise any cash, since existing shareholders are basically selling their interests in the company directly to new interested investors once the entity is officially listed on the stock market. In a traditional IPO, banks play a major role in marketing the client company, including - but not only limited to - hosting roadshows to educate selected investors.
On the contrary, in a direct listing, banks are required to do much less marketing activity, and the company can thus save huge amount of money on fees. Other than pure financial incentives, companies that opt for a direct listing process might not want to dilute current shareholders or might want to avoid so called lock-up periods. However, together with cost advantages, direct listings also comes with some risks for the company. In fact, this listing process is not supported nor guaranteed by banks, and no options like greenshoe are contemplated. 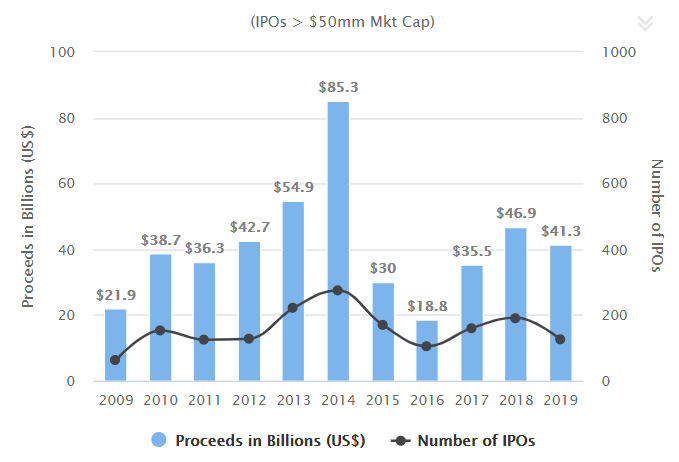 ​US IPO Market Data (Source: Renaissance Capital as of 13 Oct 2019)
A considerable number of startups have already gone public in 2019 with mixed results. Earlier this year American multinational peer-to-peer ridesharing giants Uber and Lyft went public, and both companies are still struggling with a significant stock price discount against their IPO price. Even worst the rumored attempt to go public for the nine-year-old co-working company WeWork. In fact, after having faced the scrutiny of its finances and business model from investors, the company has decided to step back and delay its massively rumored IPO. According to Bloomberg and the Financial Times, WeWork is now said to be talking with JPMorgan about a $5b credit line, and without it could soon run out of cash. On the other hand, other unicorns had a positive after-listing price path and are currently trading above their IPO price, amongst which are worth mentioning Zoom, CloudFlare, and Pinterest. 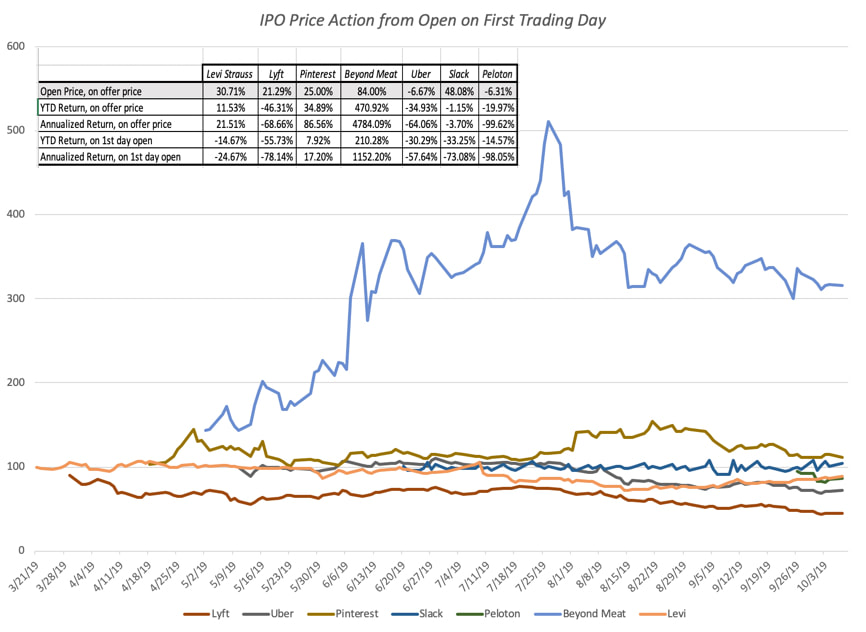 (Source: Musings on Markets)
Wall Street analysts believe Airbnb should receive a warm reception from investors at its debut, since its financials appear more stable than recent internet unicorns that have gone public. “I think it’ll be a whole different reception for Airbnb, assuming that they can show they’re a profitable business without having to lose money on marketing” commented Renaissance Capital principal Kathleen Smith. Airbnb has not given any details on whether it was profitable in the 2Q 2019, but it has previously announced that its EBITDA was positive for both 2018 and 2017 and that it reached over $1bn revenues in the 2Q of this year. When assessing the probability of success of a listing process, as relevant as financials is the firm governance. In this sense, the appointment of former Amazon Vice President Dave Stephenson as CFO of the Company in November 2018 fueled the market with enthusiasm, thanks to his extensive experience in building and scaling rapidly growing businesses.

Airbnb was founded in San Francisco by its current CEO Brian Chesk and his two former roommates. The company at first struggled to gain investor support, until it picked up a $600k seed investment back in 2009, and since that moment it started gaining growing attention from VC investors. In its third round in 2011, Airbnb raised $112m from investors including Crunchfund, General Catalyst, and Jeff Bezos' venture capital group at a considerable $1.3b valuation. It picked up another $1.6b in VC-backed investment in 2015 and $1b back in 2017. According to PitchBook, the company has raised some $4.4b to date, and the company was last valued at $31b during a funding round led by Alphabet's CapitalG in September 2017.

Although some companies have used direct listings to go public in Europe, especially in London, direct listings are still very unusual at Wall Street, where this process was almost unknown before Spotify and Slack. However, some Silicon Valley tech companies and venture capitalists are paying growing attention, hoping that Spotify and Slack might represent forerunners of a generation of startups that can find an easier way to get their shares traded. Managing partner at San Francisco venture capital firm NFX Pete Flint commented: "The IPO process is definitely, from a company's perspective, expensive and inefficient. I am excited for this increasing trend for direct listings”. One of the main challenges when going public is to establish the price for the company’s shares. Some of the most known startups that remained private have seen the establishment of a secondary market for their shares, where early-stage investors and employees could sell some of their investments, mainly to VCs. For these companies, the secondary market itself basically established a price for the shares, thus creating the conditions for an easier direct listing process.

Nevertheless, many analysts are skeptical about the possibility that this process might become common practice in the industry. First of all, companies are afraid to do something different from the standards, especially when involved in such an important phase of their lives. “Generally, corporations only go public once, and directors and executives want the process to go as well as possible. With the traditional IPO, everyone is familiar with the process and knows what to expect”, finance professor at Georgetown University Reena Aggarwal said. Another factor is that investment banks like the traditional IPO process, not only because they can secure bigger fees, but also because they can parcel out shares to their selected pool of institutional investors. Banks might not cover companies that decide to skip the standard listing process, thus creating serious considerations for companies that do not carry as much weight and media coverage as Spotify or Slack. Last, the most important and obvious consideration, is that most companies decide to go public in order to raise cash. This is especially true and necessary for big cash burning startups, like Uber and Lyft. In these cases, direct listing is not an option.

​In conclusion, many features have to come together for a startup in order to make a direct listing possible: the company has to be already well known by the financial community, the startup has to show a clear business plan and path to profitability, and its shares should be possibly already traded in an established secondary market. Should Airbnb opt for a direct listing as rumored, would it represent another exception or would it pave the way for further unicorns direct listings?