​Brazil: a recovery story (not) to learn from?

In 2014, Brazil saw the dawn of one of its worst economic crises in history. Coupled with political uncertainty, GDP decreased by 3.5% in 2015 and unemployment more than doubled to over 12%. The recession, which was combined with significant inflation, seemed to begin recovery in early 2017 and the country has seen positive growth rates since. Foreign investment picked up and Sao Paolo’s stock market has seen tremendous growth.

Yet, with the election of far-right leader Bolsonaro as President and underlying political as well as economic issues remaining, the recovery has come to a near standstill. While the issues surrounding this lacklustre economic performance are numerous, they are, above all, representative of a slow-moving political system. 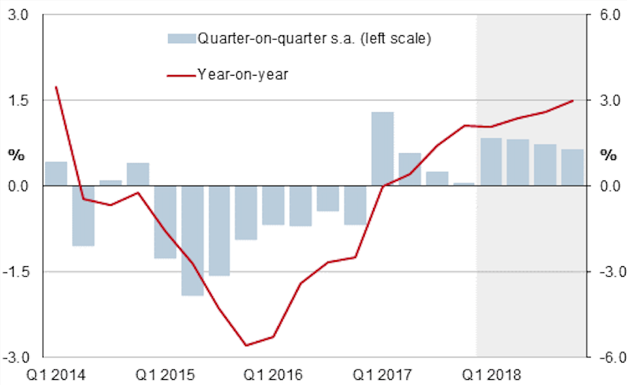 Looking at the current economic indicators, GDP growth for 2018 was estimated to be 1.1%. A significant improvement from previous years, but behind expectations, with unemployment remaining at over 11%. Forecasts for 2019 were also lowered, signalling stagnant growth. However, while the country’s economy has been performing less and less, the stock market continues to be in a bull market. Brazil’s benchmark index, the Ibovespa, has gained 12% since the beginning of this year alone, reaching a record high in February. While investors may seem untroubled, the development is nevertheless worrying. The question remains whether this bull market is sustainable and, more importantly, why Brazil is experiencing this stagnant growth?

As mentioned previously, a significant blame can be put on political mismanagement and uncertainty. Dilma Rousseff, Brazil’s President during the economic crisis of 2014, was impeached in 2016. She was replaced by Michel Temer, who would later, along with many other prominent politicians, be charged with corruption. In 2019 now, right-wing leader Jair Bolsonaro has assumed office, adding to uncertainty due to his partly radical views. The result of these government changes has essentially made Brazil’s politics ineffective, unable to pass legislation with corruption prevailing on all levels of government that keeps the judiciary busy.

The lack of efficacy can for instance be observed in budget planning and reforming. As such, Brazil has been in long need of a pension reform that would result in government saving. Economists see this reform as a necessary turning point, but negotiations have been sluggish and Bolonsaro has held a reserved stance. Complicating matters, the negotiations have come under corruption allegations.

Furthermore, Brazil’s sluggish growth can also be traced back to protectionist trade policies, with an average tariff of 8.59% being applied on imports. It means that a standard iPhone, for instance, costs in excess of $1700, making it cheaper for Brazilians to fly to the US - buy their iPhone there and then fly back - than actually buying an iPhone in Brazil. The trade policies have, to a large extent, scared away foreign companies from producing domestically in Brazil and decreased the competitiveness of Brazil’s exporters. The policies have clearly failed in protecting producers and have done more harm than good, preventing the countries growth from reaching its true potential. Yet, this is also a prime example of how Brazil is unnecessarily troubling itself.

While Brazil’s recovery is therefore far from ideal, it does teach us one lesson: protectionist trade policies can go utterly wrong.