Brazil’s comeback from the greatest recession in over 100 years

Throughout the year, Brazil’s inflation hit a 12-year high of 10.71%, the Central Bank’s benchmark Selic Rate was set as 14.25%, people from all over the world visited the country during the Rio ’16 Olympic Games and finally the President Dilma Rousseff was impeached for a massive corruption scandal. Indeed, it was a busy year for Brazilian politics; however, it may have opened the doors for change.

The new centrist president Michel Temer has pushed for government reforms and austerity. He is trying to pass a bill freezing Brazilian budget deficit for the next two decades. This would bring stability to the market and would reassure investors that change has come for the long haul. He has planned a reform in the country’s generous pension system and is expected to do the same for public services such as hospitals and schools.

Over the course of the year, inflation has fallen and is coming closer to its 4.5% target. The year-on-year inflation has been revised to 8.48% in September, well below expectations and the same measurement at the start of this year. This will make room for the central bank to lower its benchmark rate and boost private investment which, according to Moody’s, will be the primary source of growth in the economy.

In response to this turnaround, growth prospects have also changed. The economy was expected to contract 7% over 2015 and 2016, yet, is now expected to grow 1.5% next year alone. Furthermore, the benchmark equities index, IBOVESPA, has soared over 40% and has been the “world’s best performing major stock index” this year. Nevertheless, it must be considered that some of it might be due to the colossal fall of the index last year. 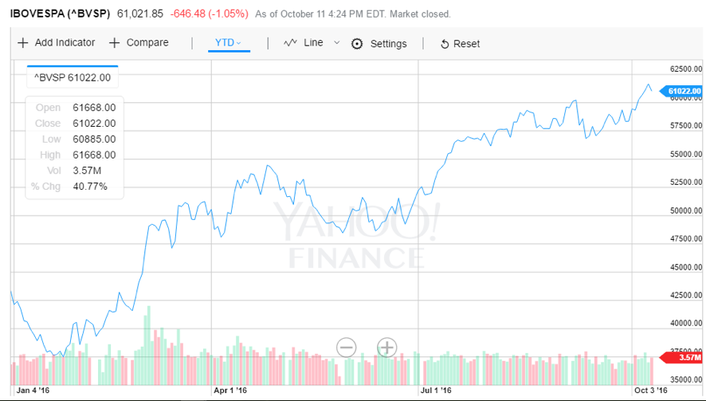 Nevertheless, there are some risks facing the economy. Politically, Mr. Temer is not popular among Brazilians, and his austerity measures will not help. For example, his education reform has not been popular given that the country's “hospitals and schools are already considered chronically bad”. On top of this, it is to be remembered that he was not even elected into power; contrarily, he took over the impeached president Dilma Rousseff. Furthermore, in the first round of municipal elections in October, his party lost in the largest cities of Rio de Janeiro and São Paulo.

Economically, there are two main threats to Brazil’s comeback: the rising Real and the rising US interest rates. The country’s currency has strengthened 23% against the Dollar this year which will take its toll on exports. Finally, the FED is considered likely to raise its interest rates as soon as December. Though it is not certain how much of Brazil’s, almost 70% of GDP, debt is denominated in U.S. Dollars, whatever part of it is will become more expensive. Nevertheless, Brazil’s interest rates are also high at home and debt issued in Brazilian Reals is also expensive.