Brazil has historically dealt with various economic and political challenges. Recently, the country has been faced with macroeconomic economic challenges including inflation, unemployment, alongside a turnover in government. Analogous to many countries around the world, Brazil’s new government as well as its central bank will need to carefully navigate this volatile environment. Investors and market participants will continue to closely monitor the economic situation as well as the direction and actions the newly appointed President Lula will take.

The history of Brazil’s economy

The economy of Brazil has historically been considered the largest in the Southern Hemisphere and in Latin America. It is a middle-income developing economy dependent on mining, agriculture, manufacturing and on a diversified industrial base that has operated since the middle of the 20th century. Brazil is also considered an important country for its mineral, industrial and hydroelectric exploits. According to the International Monetary Fund (IFM) Brazil has the largest gross domestic product expenditure (GDP), the largest purchasing power parity and is one of the ten largest economies in the world. Additionally, Brazil was one of the world’s fastest-growing major economies for the first decade of the 21st century (from 2000 to 2012), with an average annual GDP growth rate of over 5%. However, this growth started decelerating in 2013 and ultimately entered a recession in 2014. The recovery began in 2017, with an initial growth of 1% followed by 0.3% growth in the second quarter of the year. The country had officially exited the recession, but the spread of Covid-19 had an extremely negative impact on the national economy. The situation has been recently aggravated by the conflict in Europe, due to inflation and increasing geopolitical tensions.

In 2020, the Covid-19 outbreak forced the country’s economy into a deep recession. Since then, the largest deficit ever was registered by the federal government’s fiscal accounts and causing a significant increase in indebtedness. Brazil’s GDP contracted by 5.3%, the unemployment rate rose to 14.6% of the active population and the gross public debt reached 90.7% of GDP. In addition to the negative impact of the pandemic, the war in Ukraine has raised international commodity prices, amplifying inflation. Furthermore, increasing food inflation has also been driven by Brazil’s dependence on Russia. The country imports large amounts of fertilisers, and the economic sanctions placed on Russia are largely responsible for the rise in farming input and output prices. As a response, the government has eliminated import taxes related to some food and chemicals (useful for producing fertilisers). The country was able to quickly commence its recovery following the economic downturn with labour force participation rates, the employment levels and the share of formal workers falling below the 2019 levels.

Due to the challenging domestic and global environment, Brazil's economic growth prospects are slim in 2022 and 2023. In 2021, GDP grew by an estimated 4.6%, recovering from the contraction of 3.9% in 2020. According to IBGE statistics, a GDP growth of 2.6% is predicted in 2022, before declining to 0.5% in 2023. These predicted figures are related to the internal and external demand restriction, inflation, higher interest rates, uncertainty, and tight financial conditions.​ 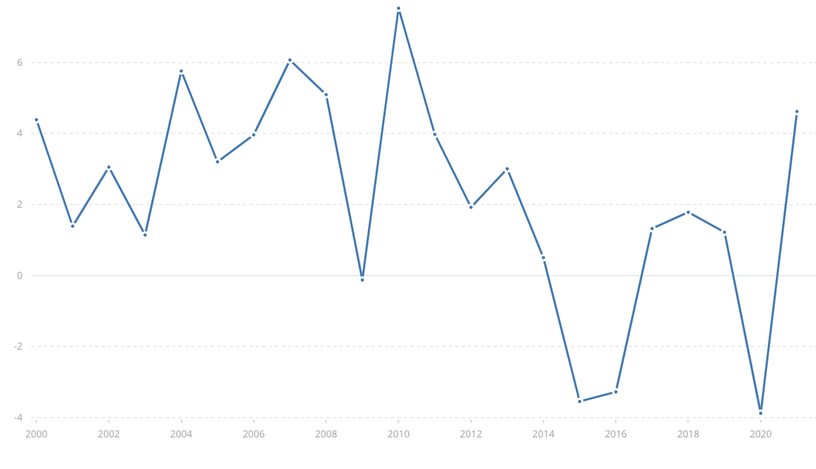 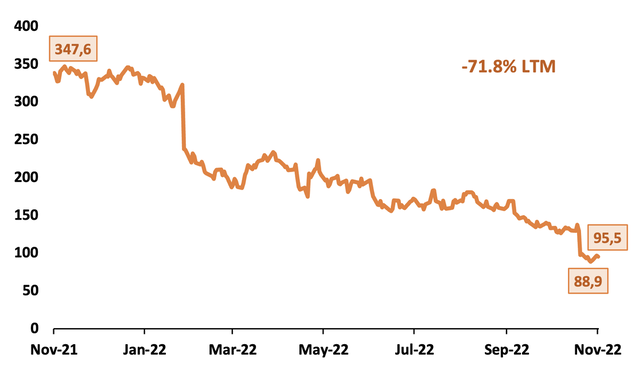 The country is still heavily indebted, and the previous president, Bolsonaro, stated that a key source of the country’s public debt is the pension system. In order to control the public debt levels in the country, the senate passed a bill on pension reform. In 2021, the government implemented a series of fiscal measures to mitigate the impact of the pandemic. Some of these measures included the expansion of health spending, temporary income support to low-income households, and lower taxes and import tolls on essential medical supplies. While the government has been managing its own debt burdens, households spent 27.6% of their incomes servicing debts. Recently, conditions for households have improved due to the employment recovering and wages increasing alongside inflation. 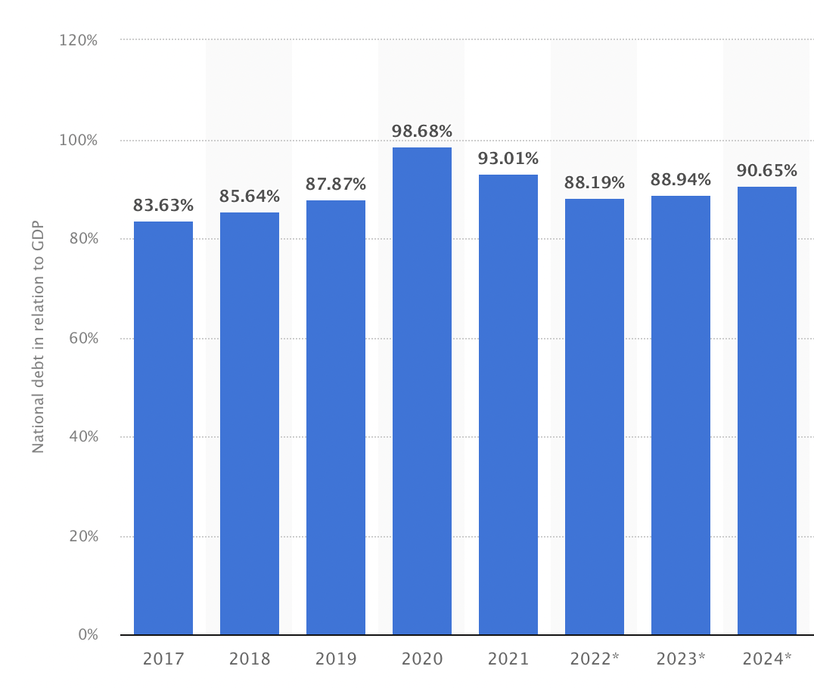 Brazil, alongside many other countries, is struggling with high inflation. The primary contributors to Brazil's inflation rate have been energy and food prices driven by supply chain dislocations as well as geopolitical tensions in Europe. Brazil’s central bank (the Banco Central do Brasil) implemented a very aggressive monetary policy that led to a rise in interest rates in early 2021. Since then, the BCB implemented several consecutive rate hikes and paused this policy only in September 2022. During 2021, the inflation rate reached its peak in November with 10.74%, surpassing the Central Bank's (BCB) target of 3.75%. However, inflation was expected to decrease to 4.9% by the end of 2022, but the IBGE revised its statistics and Brazil will close with an inflation rate of 7.89%. It is highly likely inflation will remain elevated for the foreseeable future and will depend on the effectiveness of Brazil's central bank and government.
​ 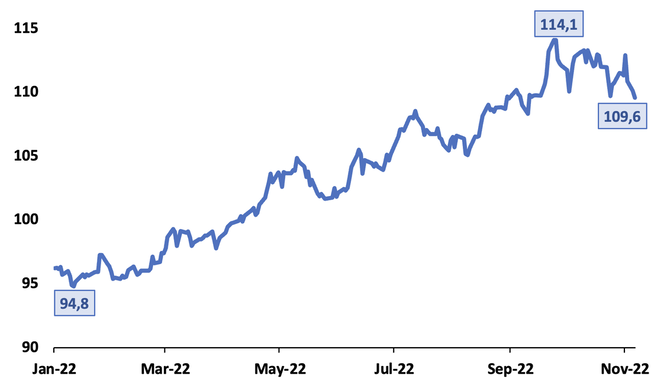 ​Brazil has seen significant volatility in the Brazilian peso as well as their stock market over the past year. Following Lula’s defeat of Jair Bolsonaro on October 30th, Brazil's Bovespa stock index was up over 1% on the day. While the initial reaction was largely positive, the lack of information regarding Lula’s broader economic agenda and rhetoric has unnerved some investors. To date, Lula has pledged to abolish a constitutional spending cap to allow the government to spend more on social projects and infrastructure. Many investors are looking at Lula’s previous terms as a gauge to how he might approach Brazil’s current economic situation. What is clear is that Lula plans to discard the pro-market model of Jair Bolsonaro and restore the state to a larger role in the economy.

In 2003, Lula won the presidency for the first time and served two terms during a period of commodities-fueled growth for the country. During that time, Lula won international acclaim for reducing poverty in one of the world’s most unequal countries. However, his reputation was tarnished by the Lava Jato corruption scandal that deeply affected Brazil’s business and political establishment, while the economy fell into a deep recession under his chosen successor, Dilma Rousseff. As a result, Lula served almost two years in prison before his graft charges were annulled by the Supreme Court. For these reasons, Lula will likely face significant push-back from the current right-leaning Congress and will have to assume a more centrist position in order to pass new regulation and policies.

There are several areas of concern that investors will be monitoring as they evaluate the future economic position of Brazil. While there will likely be higher welfare spending and investment, it must be met with fiscal responsibility as well as other financial commitments to ensure the stability of the country. Lula has indicated he will take a centrist position in regard to policy setting; however, investors are waiting for Lula to show proof of that position. It is important that Lula carefully manages the economic situation in Brazil demonstrating fiscal responsibility in order to avoid many of the bad policies set into place previously that ultimately led to chaos and recession.

Lula promised in his victory speech to govern for all Brazilians. Doing so will be difficult. Though he won international fame for pulling millions out of poverty during his previous administrations, Lula’s reputation at home was stained by corruption scandals and the economic mismanagement of his chosen successor, Dilma Rousseff. This time many Brazilians voted him as the lesser of two evils.

Deep as they are, political divisions are not Brazil’s only problem. Growth is another important matter. Much of the explanation for the inexistent growth since 2011 has to do with governance. Brazil remains a relatively closed economy and has failed to develop internationally competitive exports outside of agriculture and mining. Despite levying taxes at levels close to the OECD average, much public spending is misused by dishonest bureaucrats or into oiling political machines. Brazil spends more in percentage terms of GDP on education than France or Germany, yet the quality of public schools is poor. Investment and productivity are also low, and the congress is in debt to a host of special interest groups.

Spending efficiency must be improved and there is no need for higher tax rates or new taxes. Plenty of room exists for reviewing tax expenditures, including ineffective subsidies to specific activities and special tax regimes, while a public employment reform could generate savings and improve public administration at the same time. 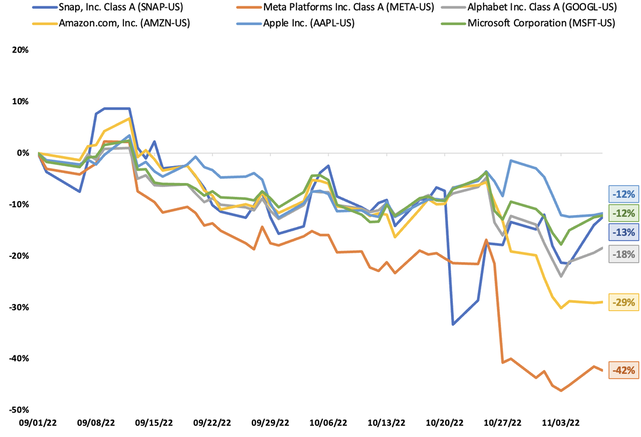 Today’s tense geoeconomic climate offers Brazil major opportunities. The country is rich in food, fuel and metals and has a flourishing renewable energy sector. It is located far from global conflict spots and has traditionally pursued good relations with the US, China, Europe, and Russia.

His responsibility now will be to persuade investors and financial markets, after a policy-light campaign that he plans to ditch the pro-market model of defeated rival Jair Bolsonaro and restore the state to a bigger role in the economy.

Lula should act quickly on his pledges to lower Amazon deforestation, which has soared under Bolsonaro, and make Brazil attractive to ESG investors. He should push for swift ratification of the trade deal between the South American Mercosur bloc and the EU. He should name a finance minister with the confidence of market investors and form a credible plan to finance his campaign promises.

Lula has pledged to increase public spending, especially on infrastructure and social welfare, to spread prosperity after a decade of stagnating living standards. But he has inherited wobbly public finances, so higher investment will also need fiscal responsibility and investors now want details on how he intends to balance extra expenditures with  a responsible management of the public accounts.

Lula has also appealed for a greater role for BNDES (the publicly controlled development bank), but also for the state-run Petrobras to stop charging international prices for fuel, and lastly for a rise in the minimum wage and pension payments.

A document published last week by Lula also pledged to improve public services such as healthcare and exempt low earners from income tax. But it was vague on how his government would pay for the move. However, many people in the financial and business world expect that Lula’s more pragmatic approach can avoid the mistakes of his successor in 2011. Her interventionist meddling and her fiscal policy were blamed for pushing Brazil into a deep slump.

Lula has demonstrated that he can be trusted to run Latin America’s largest economy. Tens of millions of Brazilians were lifted out of poverty thanks to a cash-transfer programme put forward during his presidency. As the country rode a global commodities boom, his administration largely stuck to sound economic principles. While Lula previously illustrated his commitment to Brazil, he will take office on January 1 in very different circumstances with respect to his last presidency. Growth in China, a major consumer of Brazilian raw materials, has cooled down, and the risks of a global recession are rising, as are interest rates around the world. Ultimately, Brazil will only flourish if its political and economic representatives show the same unity in modernising the country as they have shown in defending democracy.