Brexit: an overwhelming catastrophe over the UK?

June 23rd, 2016 was an historical date in the history of the European Union. 51,9% of the British citizens voted to leave the EU– which led to the “Brexit”. Brexit had and is still having a critical impact on the British Pound as, since the victory of the “Leave”, the Pound has shrunk by more than 20% compared to both the Euro and the Dollar.

However, this decline may not be over. According to a pre-vote analysis from Pantheon Macroeconomics, Brexit would be the "height of folly to rule out a further short-term decline" in the pound. The research firm’s estimates suggest that sterling could fall to around $1.20 — a level not seen since 1985.
In the last days, the British Pound was recognized as the worst major performing currency this year as investors grow increasingly alarmed at the prospect of a severe rupture between the UK and EU.
Recently, the sterling has slid to a 31-year low and British government bond prices slumped as investors feared the UK was heading for a hard Brexit and an escalation in government spending.
The sterling breached $1.27 for the second time in a week to reach $1.2662 — its lowest level since Britain voted to leave the EU — while yields on 30-year gilts jumped 11 basis points during afternoon trading to levels not seen since the UK began a post-referendum stimulus program in early August.

Brexit and the weaker pound are also having an impact on financial institutions. The most affected by the pound’s decline is surely the UK bank Barclays. The company was hardly hit by the Brexit with the stock price falling by 34% on the two days following the announcement.  Barclays was the British bank most exposed to the UK voting to leave the EU. Indeed, Barclays’ share price was quite correlated with moves in sterling. This was confirmed also by The Daily Telegraph that stated the sterling accounted for 80 per cent of the stock’s movement over the past 18 months. However, this correlation was not the only factor accounting for Barclays downturn on the announcement of the Brexit. Indeed, because of the restructuration, Barclays was also more exposed to the retail banking in the UK. Investors were afraid that leaving the EU would have had consequences on this sector due to a slowdown of the economy in Britain. Moreover, another explanation of this drop could be that Barclays was also heavily relying on the investment-banking division, which accounts for 63% of its total revenues. Indeed, leaving the EU means the loss of the pass porting right, which gives the authorization to a firm registered in the European Economic Area (EEA) to do business across European Union. Therefore, either Barclays has to move its headquarter to a EEA country to access once again the euro single market or it has to wait until all trading agreements are renegotiated.

Although the pound has been suffering, are there possible upsides from this on-going depreciation? In economics, it is well recognized that a depreciation in the local currency often results in an increase of exportations as the goods are now cheaper than before for the other countries, but actually, it seems not the case of UK. Deutsche Bank warns that UK will not take the advantages of this continue depreciation as the domestic value added is very low, meaning that sterling depreciation will hurt exporters as well as help them. Moreover, we should also see the make-up of the UK’s export. Services make up 45% of UK exports, but demand is less sensitive to price than goods, with providers competing on product quality rather than price. 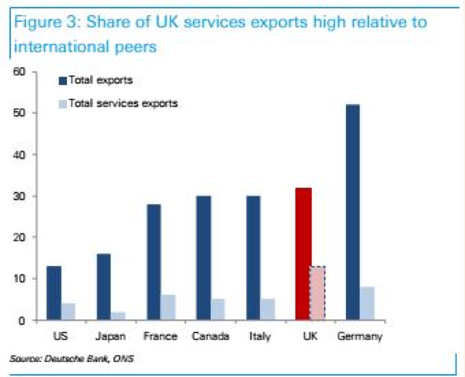