Brexit and the British Property Market

In the property sector both domestic and foreign investment continues to grow in the market. A survey of over 500 UK investors by Market Financial Solutions showed how property investors stand undeterred by the uncertainty brought by Brexit. In fact, only 7% said they had sold one or more homes as a result of Brexit, whereas 45% of them have expanded their portfolio since the referendum.

The main reason for the attractiveness of such investment is the strong regional growth of the country, driven by the strong upwards trajectories of the Midlands and North of England. Birmingham (up 16%), and Manchester (up 15%) have experienced the fastest house price growth since June 2016, with an average property standing at £163,400 and £168,000 respectively. This is mainly due to large scale regeneration projects to revive infrastructure, construction and transportation links. However, not all regions face the same beneficial outlook. For example, London house prices have largely stagnated, and in some postcodes even fallen. Since not all areas keep growing at the same pace, national house prices increased only by 0.3% in July 2019, down from 1.1% last year.

Another note that keeps this market attractive is the volume of property transactions taking place although Brexit uncertainty. In January 2019 the number of transactions on residential properties with value of $40,000 was greater than 100,000, 1.3% more than last year. Property is still seen as an asset class able to deliver long-term returns and survive political and economic transitions, for this reason 39% of the investors surveyed by Market Financial Solution plan to increase the size of their property portfolio, regardless of the ongoing negotiations.

Three possible scenarios may affect the housing market of the UK after Brexit.
​
The first scenario assumes a smooth Brexit where a deal is reached. The UK’s economy will enjoy a small uplift, with GDP growth reaching 1.5% in 2020. The house prices are expected to be affected by little change, with an average fall across the UK of just 0.1%.

​The second scenario assumes that the UK leaves the EU without a deal. Brexit will impact local economies of the country, causing larger falls in house prices. The initial impact of Brexit will be a decline in average house prices of 6.2% in 2020. Some regions will be more affected than others, in fact, London and Northern Ireland house prices are expected to fall by 7% and 7.5% respectively in this case. 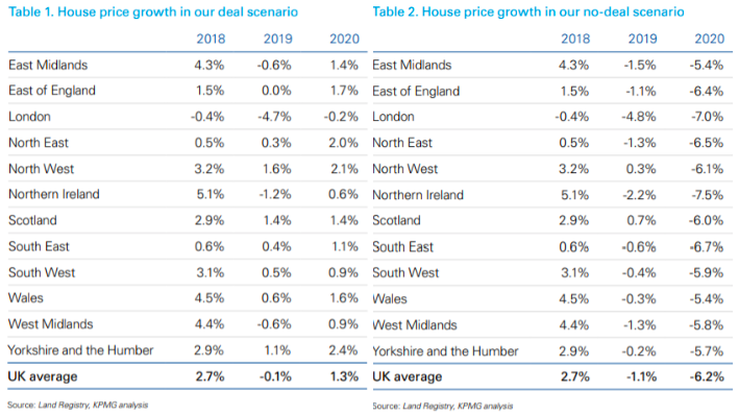 ​
Finally, the third scenario is the one we are experiencing which is an extension of Brexit beyond October 31st. There are mainly two risks associated with this scenario: on one hand the stagnation of prices and trend of transactions will not change, on the other the difficulties faced by the market in London could extend geographically further. London market has been hit harder than other areas in the country, further compounded by affordability barriers and increased duty taxes for high value homes and the pricey regions closest to the city have seen similar market conditions. Of course, a further extension would amplify these risks, but it is now deemed to be extremely unlikely to happen.

To conclude, although the house prices tend to stagnation with a very volatile number of transaction that heavily depends on the likelihood of reaching a deal, the strong regional growth of the country and the attractiveness of the assets for the long term are still appealing for both national and international investors. However, given the high level of uncertainty, some investors prefer just to wait and see.