Can Haven revolutionise the US health care system?​

In January 2018, a joint venture between Amazon, Berkshire Hathaway, and JPMorgan Chase was announced with the intention of reviving the US health care sector. Now, the endeavor has officially been established; it has been named ‘Haven’ and is currently headed by Dr. Atul Gawande and other prominent managers of the health care sector. The aim is to reduce costs and increase the quality of health care for the 1.2 billion employees at these three founding corporations. Haven also plans to share these solutions with other US companies and has claimed that this long-term effort will be free from profit-making incentives, in hopes of eliminating redundant and inefficient elements of the health care chain. As for now, quality of health care is severely limited by brokerage fees, old technology, unfavorable contracts and insurance policies.

Figure 1 shows the actual and the projected increase in the price level for health care in the US. Clearly, the unnatural increase in costs is persistent across time; the problem faced by the US is worsening and action is becoming more necessary. Compared to other OECD countries, the US has the poorest quality given the cost and availability for the average consumer. It is unreasonable to use the upper echelon of American health care as an indicator for average quality. Seeing that even Barack Obama failed to implement a more efficient and accessible system, does Haven have a realistic chance of making a significant impact? The probability is stacked against Haven. The industry is profitable precisely due to its rigidity, lobbying and overpriced products and process. Haven has set out to tackle exactly these perceived efficiencies. 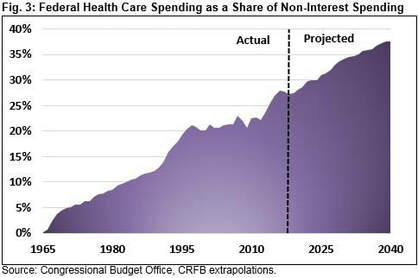 Figure 1
Haven has a strong chance of success because 1) it has a secure market, 2) it has the full financial support of its sponsors and 3) it can rely on the business competencies of its sponsors, which are number one in their respective fields in the US.

1) A total of 1.2 million insured customers is sufficient to achieve the ‘law-of-big-numbers’ style of financing and hedging risk that is commonly used in the industry. Haven’s initial 1.2 million consumers are the employees of its sponsors, meaning that this market segment is guaranteed. The pool is also sufficient to provide a smooth start given that 1.2 million vastly exceeds the minimum conditions for an insurance company. However, the shadow figure is much greater than 1.2, but currently unknown, as the health care service will also be extended to employees’ direct family members. Therefore, Haven has a secure and large pool to start and grow. It is further assumed that other large US based companies will integrate or emulate Haven, both of which contribute to its aim of revolutionizing the US health care system.

2) Large funding has meant that Haven’s management team is composed of the best minds in the field. Furthermore, if financing becomes a problem, it is realistic that Amazon, Berkshire Hathaway and JPMorgan Chase have the financial power to stabilise.

3) Berkshire Hathaway is the biggest insurer of American households. It has expertise in all fields due to its diversified portfolio of insurance and reinsurance companies. It is thus logical to assume that Haven will get support from this pool of expertise. In a similar vein, Amazon has the US’s most encompassing logistics network and technology while JPMorgan Chase has become the most successful bank in the US. Clearly, Haven has huge advantages, ranging from a large logistics network for physical product transportation and its state of the art financing options.

It is important to note that Haven does not intend to undermine the established structure totally, it merely aims to improve the health care sector by adding new competition. To this end, Haven has stated that it is willing to work with established insurers, pharmacies and clinicians to provide compromise. Haven provides a credible threat to the industry and will thus force the US health care to adjust. The entry of such a competent and heavily backed start-up will depress prices and increase quality as established companies are forced to respond and adapt. In the fall of 2018, CVS and AETNA Insurance merged in a 69 Billion USD merger in anticipation of Haven. Other vertical tie ups have been announced in 2019, such as insurer Cigna and pharmacy benefit manager Express Scripts.  Google too stands to join the health care by teaming up with insurer Oscar. These adjustments clearly show that the market has reacted already, and thus it is safe to say that Haven is on a slow, but steady road to revolutionizing the US health care system.