Can rare-earth metals become “weapons” in the US-China trade war?
​

China is the biggest producer of these metallic elements, and analysts often wondered whether China would block its exports to counter decisions taken by the American government.

Why are the rare earth elements so important?

"Rare-earths” are a group of seventeen metallic elements which include fifteen lanthanides on the periodic table, scandium, and yttrium. These earth elements are a fundamental part of modern technologies and defense systems. The U.S. Geological Survey explains that "rare-earth elements (REE) are necessary components of more than 200 products across a wide range of applications, especially high-tech consumer products, such as cellular telephones, computer hard drives, electric and hybrid vehicles, and flat-screen monitors and televisions.” Moreover, rare-earths are also key ingredients for renewable energy applications, like wind turbines and electric cars, and defense systems. The latter is one of the main reasons of concern for western countries, who highly depend on imports from China.
​
These elements aren’t rare in the sense of scarcity, since significant deposits can be found in China, Brazil, the USA, Canada, and Australia, but they are called “rare” because they can almost never be found as pure elements in nature but they are bundled together. This implies that the extraction process and the subsequent treatment are costly and extremely polluting. Their extremely negative impact on the environment is also one of the reasons why the USA reduced its production in the past few decades and outsourced it from other countries including China.
The impact the extraction of these elements has on the environment has been a cause of concern also in China in the past decade. It doesn’t come as a surprise that multiple countries around the world, including China, decreased their production significantly.The process of adding chemicals to separate out the metals and the following step of drilling holes into the ground to get the materials, heavily pollute the air, the groundwater, and the soil, causing erosions. Existing and abandoned mines continue to release chemicals into the environment, creating terrains incapable of growing crops and producing contaminated waters.

Share of global production as of 2019, by country (Source: Statista) 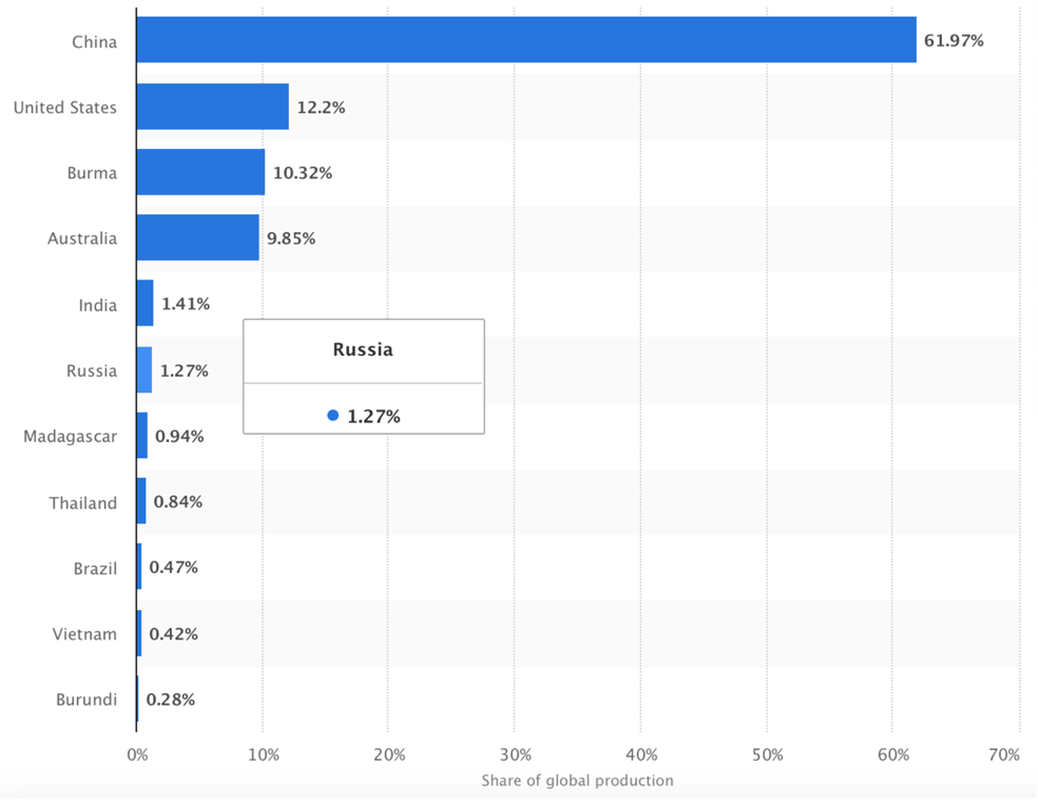 China is the biggest producer of rare-earth elements in the world with 62% of the global share as of 2019, as can be seen in the graph realized by Statista. The US, Myanmar, and Australia complete the top list, but they are clearly way behind China, with 12.2%, 10.32%, and 9.85% market share respectively.
Although China’s position is still remarkably higher than all the other countries, its monopoly has actually decreased in the past 10 years. 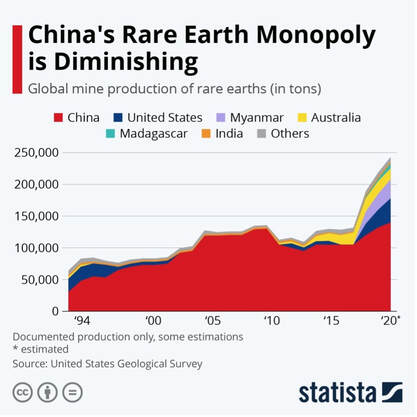 China’s monopoly started in the late 90s. Between the 1960s and the 1980s, the majority of global rare-earths supply came from the Mountain Pass mine in California. This mine closed in 1998 after issues surrounding the disposal of toxic water and because of Chinese producers driving down the price.
Then from the 90s, China started to produce them for the global economy, and it also had to shoulder the associated environmental costs.
According to data coming from the United States Geological Survey, China’s dominion peaked between 2005 and 2010 and has since been declining.

In recent years, the topic surrounding these rare-earths became increasingly important, as these materials could be potentially weaponized in the trade war between the 2 world powers, the USA and China.
Under Trump’s presidency, the USA decided to counter China by imposing tariffs on billions of imports and to limit the importance of a company like Huawei by cutting it out from the main American suppliers of designs, chips, and processors. Analysts often asked themselves whether China would follow suit by imposing limits on the exports of rare-earths.
China is aware of its strategic advantage when it comes to the production and supply of critical minerals. In fact, China has a grip on many critical minerals required for what may very well be the technologies of the future, mainly renewable energy and EV. More than 70 percent of global EV battery manufacturing capacity is in China, the majority of lithium-based factories are in China as well, and so are the biggest producers of cathodes and anodes for the batteries.
Although China often made it clear that they could restrict the production or the exports of said materials if they deemed it necessary, they never took proper measures so far.

Will these metallic elements be used as “weapons” in the trade war?

In May 2019, following the blacklisting of the telecommunications company Huawei by Donald Trump, President Xi Jinping visited a rare-earths producer in Ganzhou. People with knowledge on the matter interpreted it as a signal to the USA that China could potentially limit the export of these elements as a form of retaliation.
However, the effects of these possible curbs are limited, according to analysts. This is because China is not the only producer of these materials, and multiple countries already took steps to counter their dependence on China. For instance, the American chemical firm Blue Line Corp and the Australian rare earth miner Lynas have already started the construction of new extraction facilities in the US. Moreover, countries around the world have already built up their reserves of rare-earths, to withstand potential months of limited imports. One of the most important production sites in the USA, America’s Mountain Pass, resumed production in January 2019 and, according to recent research, it is already supplying about 1/10th of the world’s rare earth ores.

Moreover, China had tried to limit the production quota already in the past, in 2011, mentioning environmental reasons, but had to drop the export curbs in 2015 after losing a case at the WTO. In addition to this, many Chinese producers expressed their concern about this matter, since they were limited in the amount they could extract, and this could lead other companies around the world to step up and eat their market share.

In January 2021, the Chinese Ministry of Industry and Information Technology drafted potential restrictions on the production and export of 17 rare earth minerals. This followed a remark by a government adviser who asked companies whether the US would be heavily hit in their production of American F-35 fighter jets and other sophisticated weaponry, in case China decided to restrict the exports. The government also wanted to know if the US could come up with a solution in the short term and if they could find new sources of said elements quickly.
The Sino-US relationship deteriorated under Trump’s presidency, and it is looking to continue this way under Biden’s presidency. China is looking at ways to counter the US, but people with knowledge on the matter believe that controlling the rare-earths is not reasonable since it could easily backfire, disrupting the supply chain within China and prompting countries like India, the US, and Australia to ramp up their domestic production.

In conclusion, we can say that rare-earths are key materials for the present and future technologies, as well as essential components of defense weapons, but limiting its production and export is not a solution China is likely to adopt in the trade war.

​Antonio Wang
​
Want to keep up with our most recent articles? Subscribe to our weekly newsletter here.