The market for permits to emit greenhouse gases (GHG) was quite turbulent this year. From the beginning of the year the prices for carbon emissions allowances have dropped drastically to less than €5 per metric ton in February. The drop is mainly explained by the over-supply of carbon allowances caused by economic slowdown and sluggish industrial production. This has raised some doubts about the effectiveness of the EU Emissions Trading Scheme. 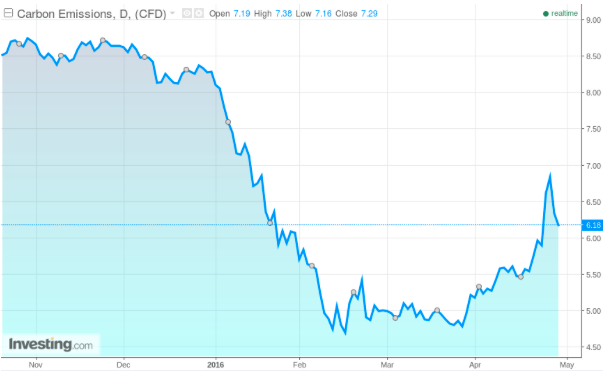 The EU carbon Emissions Trading Scheme (ETS) is the part of the European Union's policy to fight climate change. The main idea is to reduce pollution by providing economic incentives to cut CO2 emission. The EU ETS operates under the “cap and trade” principle, which implies that a maximum total amount of emissions for all the facilities is defined (a cap). Under the cap, emission credits (or allowances) are distributed - either for free or sold  through auctions - to individual entities. The size of the cap is supposed to decrease each year by 1.74% of the average total quantity of allowances. Each credit gives a right to emit one ton of carbon dioxide and if the facility does not cover its emission by the appropriate number of allowances, heavy fines will be imposed on it. The allowances can be sold or bought freely on the secondary market if needed.

Some experts say that the price for allowances has to be at least €30-40 per metric ton to provide sufficient incentives for companies to reduce their emissions. No wonder that the EU regulators started looking for a solution to stabilize prices. There is a chance that the European Parliament might accelerate the pace of the carbon emissions reductions from 1,74% to 2,2-2,4% yearly. The increase of the linear reduction factor should help to reach the “2050 decarbonization target”.
​
The potential increase of the reduction factor indeed spooked the market a little bit, so the prices have risen to almost €7 in the end of April. However, the possible policy change was not the only contributing factor. The carbon prices climbed following the increase of the oil, gas and power prices.