Introduction
The residential real estate market was certainly affected by the outbreak of the COVID-19 pandemic, especially in the metropolitan areas, but what changes has this black swan brought out?
In this article we will give you an overview of the European residential real estate market by presenting the activity of Casavo, an Italian start-up that has disrupted the way of conducting business in the residential segment and has overcome every expectation despite current challenges. We will finally give our predictions of the sector's future development by observing on the TOGGLE platform how the market capitalization changes if exposed differently to significant independent variables.
Casavo - Business Overview
Casavo is a startup operating in the real estate sector. Founded in 2017 in Milan, its mission is to revolutionize the process of purchasing and selling real estate, primarily residential properties. In its brief existence, it has managed to secure the title of the largest ‘instant buyer’ in Europe.

The service operates online and allows sellers to receive a quick and accurate valuation of their property based on given inputs and proprietary technology. The property is then listed on the site, where it can be purchased via an accelerated process (referred to as instant buying). Furthermore, Casavo provides legal assistance and handles the financial transactions between the two parties.
​
Casavo’s initial services, including property valuation and verification, are free of charge, yet the startup generates revenue by taking an 8% commission on each executed sale. Thus, the buyer pays a fair market price for the property, and the seller receives a slightly lower figure due to the fees. Despite the hefty cut, it has proven to be a price worth paying in big European cities, such as Milan, where the process of selling real estate may take anywhere from 6-8 months. Casavo estimates its average sale to take place within a month.

As previously mentioned, Casavo was founded in Milan, which originally was also its only market. However, it has now expanded to several cities in Italy, and even Spain, including Rome, Turin, Madrid, and others.​
Casavo - Financial Performance
Since its inception, Casavo’s financial performance has roughly resembled that of a typical startup, with massive cash injections, negative profits, and exponential revenue growth.
In just two years, the company went from a revenue of 0 in 2017 to over €7M in 2019. This trend is persistent, as indicated by the company’s increase of transactions to up to over 1,100 in 2021, with an overall value of €300M. Assuming an 8% commission on these transactions, that indicated a cumulative revenue of over €24M.

Unfortunately, data for 2020 is not yet available, but the trend seen in the chart below is obvious - Casavo is experiencing meteoric growth, and its operating loss is decreasing. Likewise, total assets grew from €39,115 in 2017 to over €30M in 2019. 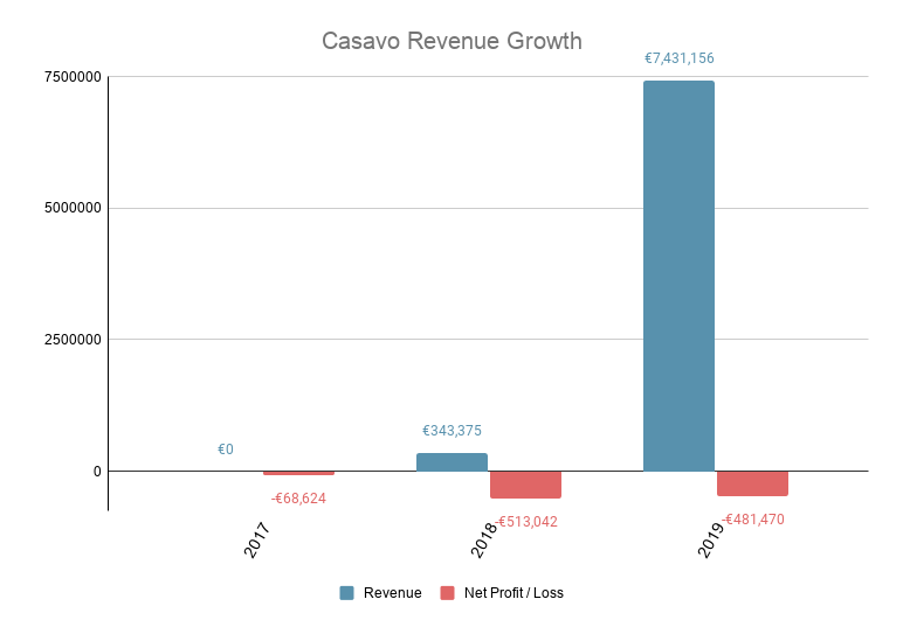 Casavo's Revenue and Net Income (2017-2019). Source: Orbis
Casavo - Latest funding round
In large part, Casavo’s quick growth has been enabled by the capital injections from various institutions - in the form of both equity and debt. Specifically, the most recent funding round (Round C) has resulted in Casavo receiving €50M in equity, mostly from Venture Capital firms such as Project A ventures, as well as €150M in debt from Goldman Sachs.

Previously, Casavo has raised €500k pre-seed, along with several other fundraising rounds, all from VCs. The overall funding raised from inception amounts to €385M - the largest amount to ever be received by an Italian startup.

Given this access to capital, Casavo is looking to further establish themselves in their current markets in Italy and Spain, as well as continue their international expansion within large European cities. Furthermore, founder and CEO Giorgio Tinacci has expressed the company’s intent to “continue to invest in our team and technology to create the best digital experience for our clients” and “expanding its marketplace product offer to cover all the needs of sellers, buyers and brokers”.

Despite the ongoing pandemic, the CEO’s future outlook for Casavo remains positive. According to a recent interview, his company was able to benefit from the increased demand in large cities, due to a growing economy and a thriving job market. However, he predicts a short-to-medium term increase in volatility due to a significant contraction in the economy caused by Covid-19, as well as liquidity injections by the country’s central banks and financial institutions. All in all, “although there could be more liquidity in the system, its allocation towards more risky ventures such as real estate development will not necessarily increase.”
European Real Estate Market Uncertainty
Given that Casavo operates in the European residential real estate market, it is considered necessary to study COVID-19’s impact on it and its current state. More specifically, the pandemic has led to a high degree of uncertainty in global markets. With major differences in government policies and stimulus packages to respond to the outbreak, the US-China trade wars, BREXIT, and the US elections, markets are changing and adjusting to the new conditions in varying ways and speeds. Despite that, real estate continues to be an asset generating satisfactory returns given the current interest rates.
The effect of COVID-19 on the European Residential Market​
According to the “Property Index - Overview of European Residential Markets” report by Deloitte, the economic crisis prompted by the COVID-19 outbreak is expected to be “the worst since the Great Depression”. This would directly influence the residential market and the effects would generally vary from country to country.

First of all, when governments started announcing and enforcing protection measures, the housing markets in most countries instantly froze, with almost no new deals being initiated, especially due to lockdown restrictions that did not allow property viewings and meetings. Currently, however, many real estate agents are starting to implement virtual viewings alongside other measures, in an attempt to resolve the aforementioned problem. Additionally, transactions in the early stages were put on hold until more information about the economic outlook was available.

Moreover, due to COVID-19 restrictions, many construction projects were paused, with many companies facing issues regarding both funding and labor. If this situation was to persist for a long period of time, it could lead to an increase in prices and a scarcity of properties in some countries, similarly to the previous crisis. However, both construction companies and governments are now better prepared to handle these issues and this aspect of the crisis could be averted.

Another important issue that influenced the prices in the housing market and especially rents was the sharp decrease in tourism during summer since the majority of country borders were closed by the governments. As a result, in many major cities and tourist destinations, properties that were mostly used for accommodation services (e.g. listed on Airbnb) were put in the long-term rental market, putting downward pressure on prices. The long-term effect of this trend will depend on whether the owners will choose to return to the tourism services market in the future or remain in the current one.

Finally, an identifying trend of the past year relevant to the residential real estate market in Europe is the application of the work-from-home model, which has become increasingly popular due to COVID-19 lockdown restrictions. Experts have speculated that this trend, in combination with the fact that less commuting is required, has changed the way people view and assess property and housing. In the UK, research has shown that many employees have been moving out from big metropolitan centers to smaller towns and the countryside, searching for properties with bigger spaces, home offices, and a greener environment.

Degree of employee satisfaction regarding working from home. Source: UBS
On the other hand, however, a survey conducted by UBS with a sample of 3,200 citizens of Germany and Sweden has found that despite the high percentages of satisfaction concerning the efficiency of WFH (71% and 82%, respectively) and willingness to continue working from home more, no strong evidence has been found to support reverse urbanization. The levels of Berlin and Stockholm residents that are planning to move out are consistent with last year’s figures and remain constant at around 5%. Therefore, the WFH trend seems to have variable effects on people’s preferences, which can possibly be attributed both to real estate market structure differences and government policies.
Current State of the European residential real estate market
As it can easily be understood from the two graphs above, both house rents and prices continued to rise despite the pandemic and the restrictions that led to limited availability for property viewings. This comes as a surprise to many economists since the data available do not theoretically point to a housing boom, even though in reality this is what is happening, with house prices in the richest countries not only continuing to rise but even accelerating in some cases. The residential market’s resilience can likely be attributed to government measures regarding the stimulus packages handed out to support struggling companies and thus allowing many workers to maintain their income and keeping borrowing costs relatively low.
​
In detail, the interest rates in the majority of European central banks are near-zero, therefore causing mortgage interest rates to remain low and allowing people to invest in residential real estate more confidently. 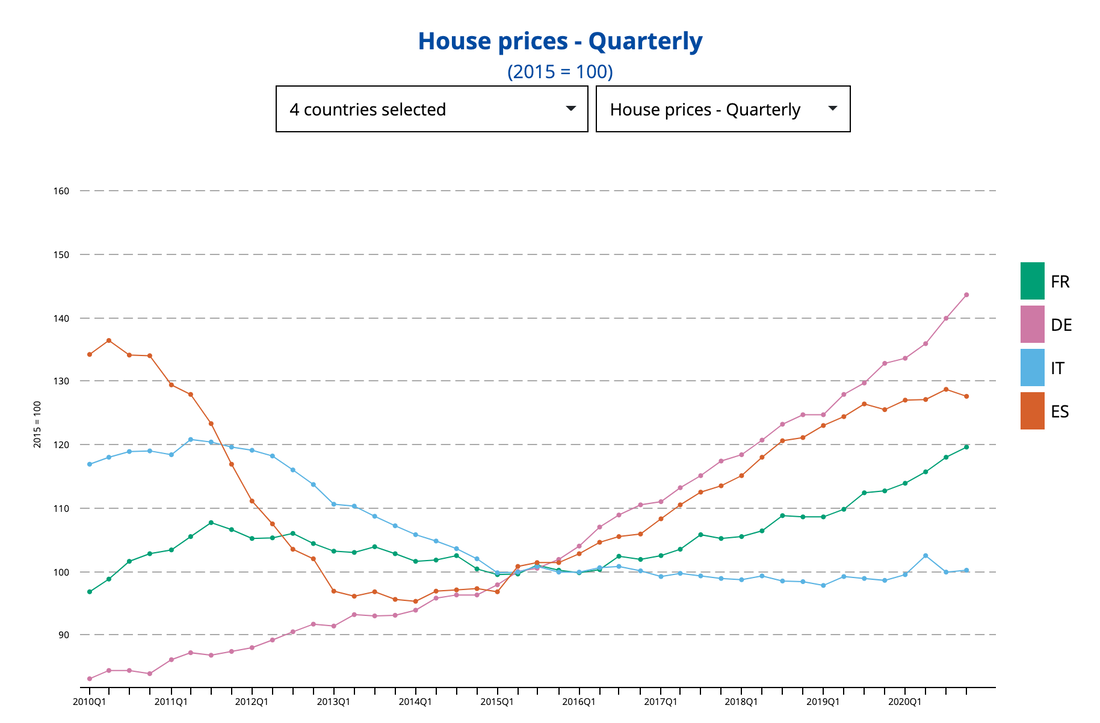 House prices - Quarterly index in France, Germany, Italy and Spain. Source: Eurostat
Predictions on European residential real estate markets
The expectations of experts concerning the future of the different European residential markets vary greatly. For the majority of countries, they expect prices to remain constant and activity to decrease, whereas, for countries that were greatly harmed by COVID-19, such as the United Kingdom and Croatia, or that already had slowing housing markets, such as Hungary, they predict negative results. Finally, countries with traditionally stable housing markets, such as the Netherlands and Germany, are expected to see further growth.

In order to complete our report, we wanted to give a hint on how the different market variables influence real estate prices by extrapolating data from TOGGLE, an innovative AI-powered investment research platform. In particular, we observed the relationship between the Stoxx EU Real estate price and two selected variables:
​ 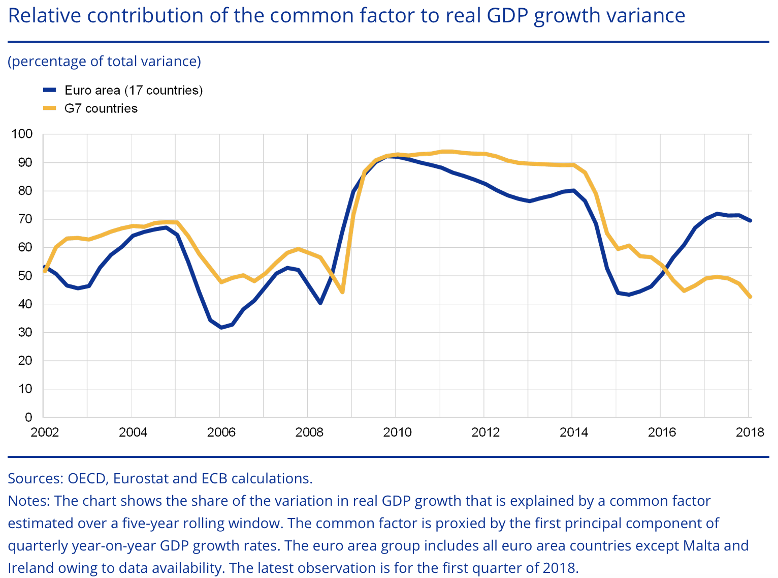 Synchronization of growth in Euro Area countries. Source: European Central Bank
As the TOGGLE graphs show, a combined drop by 0.25% of IRS rates and a rise by 3.80 point of Italy Business Confidence are generally associated with a subsequent increase of 13.8% in the Real estate price index. This can be explained simply considering that if a decrease in the interest rates (boosting the demand for mortgages, which can be negotiated at more favorable terms), is combined with an increase in the business confidence index (evidence of expectations of an increase in income per capita over the long run, thus producing a positive impact on the overall lending turnover), the real estate market will predictably reach a higher capitalization. 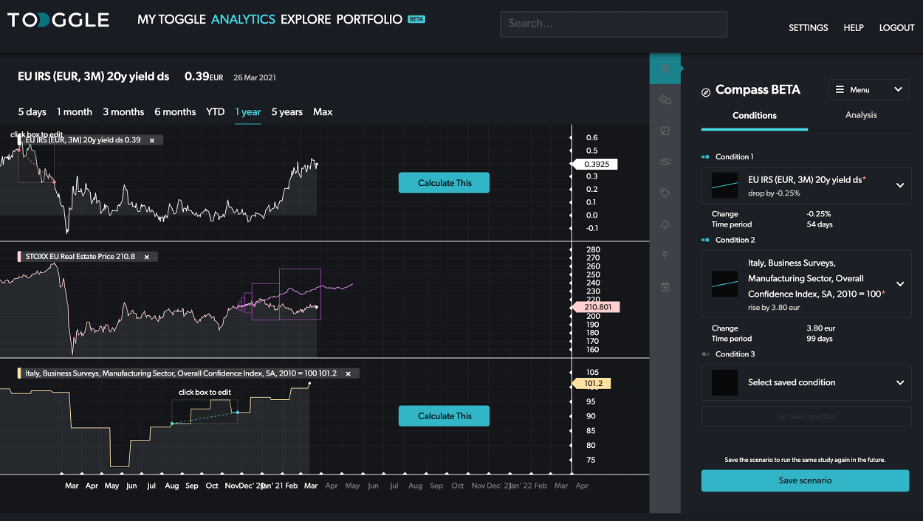 Impact of a combined rise in Italy Business Confidence Index and of a decline in EU Interest rate swaps with a 20 years maturity on STOXX EU Real Estate Index. Source: TOGGLE
Conclusions
The results of the analysis do not consider certain variables that are relevant and directly influence the case at hand, but still give a very realistic overview of what is happening, since on the one side the European Central Bank, according to its recent statements, has renewed the commitment in keeping interest rates and inflation stable and on the other side, as the vaccine campaign accelerates, the expectations of economic recovery are turning positive. Both of these events increase the confidence of investors in the residential market, which, despite the current uncertainty, is expected to continue to grow. In conclusion, Casavo will likely be able to sustain its performance so far, especially after the success of its latest fundraising round.
BSCM would like to thank TOGGLE for giving us access to their AI-powered investment research platform and providing charts and data.
Matteo Girello
Stergios Mastoris
Daniil Tiugaev
Want to keep up with our most recent articles? Subscribe to our weekly newsletter here.