Caught in the Crossfire of the U.S.-China Trade war

​Free market economists generally agree that protectionism, in the form of bilateral tariffs imposed by two nations, brings overall negative effects to the countries directly involved and likewise to other economies, due to impact on trading volumes and supply chains. The announcement of an increasing likelihood of tariffs on trades among the world’s biggest economies resulted in a decrease in the level of business confidence within trade-reliant economies, such as Singapore. For long, Singapore has been the country with the highest trade to GDP ratio and, being located at the end of the strait of Malacca, it naturally holds the world’s second busiest shipping port. Trade-reliant countries, such as Singapore, are expected to suffer the consequences of a trade war, yet the month of February 2019 saw a sharp increase in domestic exports after many months of downturn.
ASEAN countries’ stock markets have experienced considerable downturn when expectations of future escalations and threats of tariffs jumped up right after the stipulation of a number of deals had become the most likely scenario. However, despite markets being considerably worried about the potential negative immediate impacts of the trade war, according to some, a number of countries may end up benefitting in the long-run from the relocation of supply chains.
China, Hong Kong and the U.S. and were the biggest contributors to the increase in Singapore’s exports of February: this evidence would suggest that the first economic giants might be looking elsewhere for trade, hence that Singapore may end up as a beneficiary of the trade war. Yet, Singapore relies heavily on China, its main trading partner, and, as Chinese growth is slowing, this is likely to negatively impact the Singaporean economy. 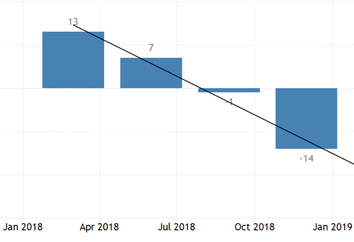 Source: Tradingeconomics.com
​In addition, the business confidence index of Singapore stands at -14, the lowest between all G20 countries, falling short only of the uncertainty torn United Kingdom. The following graph shows how the business confidence of Singapore is directly correlated with the start of the Trade war, which began and then escalated in January of 2018, when it effectively became a bilateral war.
After the downturns experienced by the global stock market in December, global markets and the STI itself largely recovered. Right now, there seem to be experiencing a positive move, likely correlated to the export increase.
As mentioned above, in January 2018, the fact that the trade war became bilateral led Asian stock markets, including that of Singapore, to a very negative reaction. The following graph shows how Singapore’s STI has generally reacted to the U.S.-China trade war and the news of positive export data from this past February. The trade war has negatively impacted markets together with the global fears of recessions. At a first glance, it seems that recent news on the spike in Singapore exports directly impacted the STI very positively. However, it is worthwhile to note that, during recent months, the U.S.-China trade war seems to have deescalated, which would be likely to have a positive, and possibly greater in magnitude, effect on the STI than the positive news from increasing exports. 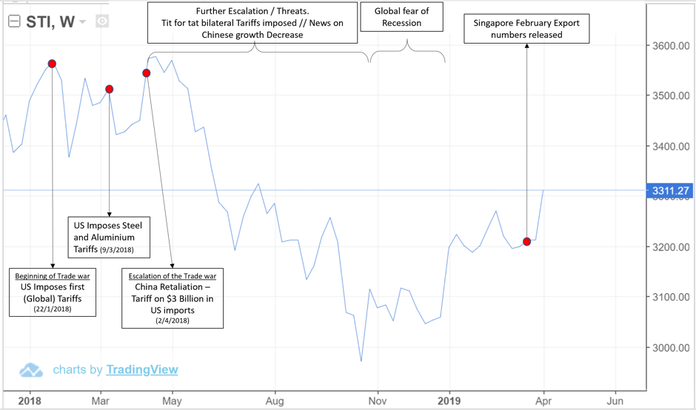 Source: Tradingeconomics.com
Therefore, even after a somewhat unexpected spike in the level of exports, Singaporean markets still remain quite pessimistic on the chances of a long-run positive impact of the global trade war, as the current positive trend is more likely to be a partial readjustment after December and a consequence of the increasing likelihood of a deal. The economists of the Monetary Authority of Singapore slightly cut growth forecasts for the country.
Nonetheless, while some relationships deteriorate, others blossom: Singapore is seeking trade elsewhere and is attempting to develop closer relationships with the European Union. In February, the EU Parliament, to strengthen the link with the Asian economy, approved the Partnership and Cooperation Agreement which guarantees free trade between the two entities. Likewise, among ASEAN countries, further trade agreements were formed with the European Union, such as the CPTPP, officially signed early March of 2019. This could have also contributed to the recent rise in the STI. The recent developments suggest that Singapore may soon recover thanks to stronger relationships with other uninvolved parties, such as the EU. Yet, its main trading partner remains China for now and Singapore, as most trade reliant countries, is likely to be negatively affected overall. So far, many trade driven ASEAN countries have experience severe cuts in their growth forecasts, which, as their timing proves, seem to be correlated to the U.S.-China tariff implementation. Besides Singapore, the Philippines, Indonesia and Thailand have also slowed in growth.
​
On the other hand, Vietnam is going against this main trend. The country seems to be likely to benefit from the trade war. During recent years, many companies have flocked over to Vietnam, looking for cheap labour, as Chinese factory wages steadily increased. Indeed, both Nike (NKE) and Adidas (ADS), two of the largest sportswear manufacturing multinational corporations, moved their footwear manufacturing businesses almost entirely to Vietnam, whilst other competitors, e.g. Puma. are not far behind in this transition process. Although not directly correlated to the trade war, it is likely that the tariffs imposed will encourage the speed-up of this process.

In conclusion, the recent positive export news from Singapore are is unlikely to signal an increase in the chances that Singapore would directly benefit, in the long-run, from the trade war. Indeed, the country is still mostly reliant on China, which has suffered due to the protectionist upswings and the trend of its main stock market seems to suggest that, in the next years, the small economy is destined to stay anchored to the expectations of future relations between the two biggest economies. Yet, from the Singapore perspective, there is certainly an attempt to find new trading partners within the EU, so as to distance itself from China and the U.S.. Meanwhile. the country Vietnam is, as for now, the country most likely to be the real benefiter of this U.S.-China trade war.