Chinese M&A Market Background
​
Until now, 2017 has not been a positive year for the Chinese outbound M&A market, especially if compared to 2016. As a matter of fact, at around $80 billion, the year-to-date value of the Chinese cross-border M&A market almost halved with respect to the last year’s value. The drivers that caused this sudden shrink are multiple, but according to the people familiar with matter, the policies implemented by both the Chinese and the European governments played an important role. 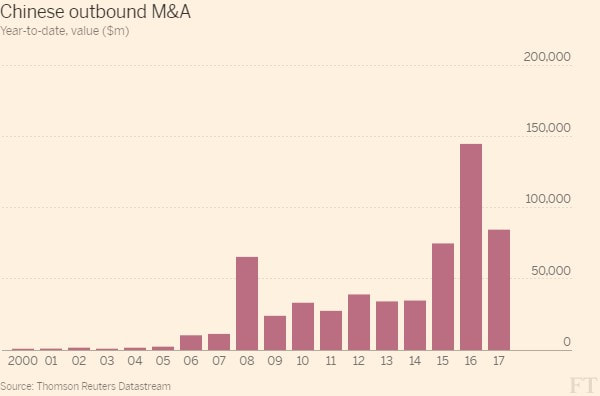 In fact, on one hand, the Chinese government, at the end of 2016, has placed limits on capital outflows by increasing regulatory and political scrutiny, with the purpose of preventing the capital exodus that happened last year. On the other, there is the statement released by the European Commission this summer regarding the screening of foreign takeovers of European companies. The aim of the European Commission is that of protecting its companies from Chinese acquisitions, especially those in sensitive sectors such as energy and high-tech.
Therefore, the combination of possible restrictions on capital inflows from China to the European Union and the limits already in place on capital outflows from China to other countries seriously reduced the overall M&A activity in Europe and China in 2017.
​
Deal Details

Even though the outbound M&A activity declined during 2017, some companies, such as ChemChina, managed to close interesting deals.
China National Chemical Corporation, or ChemChina in short, is a Chinese state-owned chemical company and national leader in the product segments of agrochemicals, petrochemical and rubber products. The Chinese Giant, with over CN¥260 billion (approximately $40 billion) of revenues, in the middle of 2017 added one more company to its portfolio after the 2015 acquistion of the italian Pirelli. The company, named Syngenta, is a Swiss pesticide and seeds maker with a market cap of over $43 billion.
The initial offer made in 2016 by the state-backed company was $43 billion to be paid in cash for 100% of Syngenta, with financing provided by Morgan Stanley and Bank of China through the issue of a $20bn perpetual bond and preferred shares, and by HSBC and China Citic Bank International through bridge financing. The latter were also the two buy-side advisors with an expected fee ranging between $65 and $95 million, while the sell-side advisors, with an expected fee between $59 and $71 million were Dyalco, JP Morgan, Goldman Sachs and UBS. The deal was the biggest ever Chinese-involvement M&A deal, as well as the biggest outbound M&A deal on record, and the biggest targeting Europe.
The rationale behind the deal is somehow unconventional, in fact it concerns food security. In order to thoroughly understand the concept of food security one has to jump back to few decades ago, when China and its people were still suffering tremendous and devastating famines. In fact, it is true that China has now become the world’s largest producer of agricultural products, but it also true that in this country alone live about 19% of the total World population. And considering also the fact that only 7% of its territory is arable, it is clear how difficult is for China’s agricultural production to keep up with its population’s needs.
This fact is also proved by the increasing level of vegetable imports (including grains) which skyrocketed to over $60 billion in 2015 from just $40 billion in 2010, as it is clearly visible in the graph below. As a result, despite high levels of self-sufficiency, China has overtaken the USA to be the world's largest importer of vegetable products.

This is where Syngenta comes into place. In fact, the company is one of the four leaders in the production of genetically modified crops and advanced agricultural production technologies, and since what ChemChina lacks is seeds, the acquisition made perfect sense. Moreover, even though GM seeds are currently banned from China, ChemChina is betting that the ban will be relaxed soon, allowing the company to intensify its production of vegetables and crops in China, increasing in this way the domestic food supply and food security.

Future Moves
​
The acquisitive ChemChina is now looking at its next target, and according to the people familiar with matter, it is planning to acquire Sinochem, another Chinese state-owned chemical company. The combined entity would reach approximately $100 billions of revenues, becoming in this way the world’s largest chemical group. However, experts say that the merger would be politically driven, as ChemChina needs now the financial strength to absorb Syngenta, which would be provided by the acquisition of Sinochem, also thanks to its solid debt-to-equity ratio of 128 per cent (ChemChina’s debt-to-equity is 256 per cent).
Federico Cadorin