China battle in artificial intelligence: the surge of the eastern power

​China is at the forefront of the huge revolution that concerns artificial intelligence. According to “AI Superpowers: China, Silicon Valley and the New World Order”, the book of Mr Kai-Fu Lee, former president of Google China and now leader of a venture capital in Chinese technology, China entered this revolution when Google DeepMind’s AlphaGo overcame Ke Jie, the former Chinese game leader of games of Go. Mr Lee does not see a future for China in innovation in AI, but rather in implementation of AI. The major inventions in the field have already been created and discovered, now it is time to make them real. According to the author, China has some competitive advantage.
In particular, he exposes seven points he thinks are relevant for the matter. First, the most important discoveries in AI are available to read online and everyone has access to it, even China, so that it does not need to do major research to keep pace with other countries, first of all US. Second, China is a hypercompetitive and ambitious country, that has already permitted to overcome western countries on other technologies, such as smartphones or gaming platforms. The country is always in a position to provide the same technologies at a lower price and this has made the history for China’s technologies. The country’s means have always be effective and efficient on the concern. Third, China is characterised by dense urban settlements that create a big demand for deliveries and other services that manage to put together the online and the offline worlds. Fourth, China is in some things backward and this allows to implement quickly new technologies, and this has led the country to be an even more advanced country than what we are used to think. Fifth, China has scale. If data is what matters in artificial intelligence, China has simply more than Europe and US put together.  Sixth, the government backups the research and the advancement in the field and is supportive for innovation and willing to take risks in order to reach risky but entrepreneurial goals. Seventh, the Chinese public is less preoccupied about privacy than western people and more willing to give data even if they invade their living space.
If we had to make a distinction in the different aspects of AI, we would differentiate between internet AI, where China almost equals US but might also overcome it; business AI, that allows business to exploit data better, where China is behind US but might catch up; perception AI, where China is and will be much ahead; autonomous AI, where China is behind but might become equal.
If we analyse the drivers of the process, China is behind in the production of hardware and in the research field, but has a super power in terms of data, users and commercial applications. 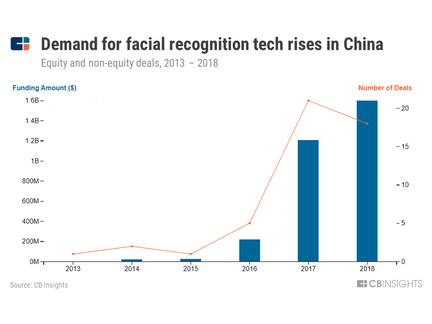 ​But what is happening in the world of AI in China? The answer is not so soothing nor comforting. The giant leader Microsoft has in fact worked together with a military-run university on artificial intelligence research producing not one, but three different paper on the matter. The major concern rises by the fact that they could be used for surveillance and censorship. The three papers were published between March and November last year and were co-written by academics at Microsoft Research Asia in Beijing and researchers affiliated to China’s National University of Defense Technology, controlled by China’s Central Military Commission, the top military body. One of the papers, in particular, was about the application of AI to recreate environmental maps starting from a software of facial recognition, which can have applications to surveillance and censorship. Another one is about machine reading, a way for computers to read online text that could increase the control on Chinese people’s life. The US government is thinking that this kind of collaborations, that could have impact on people’s life and are related to a serious topic such as artificial intelligence, should be more regulated and this is also the opinion of Madhumita Murgia, interviewed for the Financial Times by Malcom Moore and expert in the topic. Senator Ted Cruz, the Texas Republican who has emerged as a leading China hawk said that it is important that Americans ensure they are not enabling the Chinese Communist party’s oppression. Microsoft defended the research, saying that it is part of a worldwide effort to work with their international counterparties. Adam Segal, director of cyber space policy at the Council of Foreign Relations, noted that the revelation comes at a time US authorities are keeping an eye on academic relationships with China because of the fear that new discoveries could come at help of the Communist Party. Moreover, Mr Marco Rubio, Republican senator in Florida, told the Financial Times: “It is deeply disturbing that an American company would be actively working with the Chinese military to further build up the government’s surveillance network against its own people — an act that makes them complicit in aiding the Communist Chinese government’s totalitarian censorship apparatus and egregious human rights abuses”. The US commerce department is trying to identify emerging technologies that are essential to US national security because they may improve intelligence collection, weapons of mass destruction, have terrorist applications, or provide the US with a qualitative military or intelligence advantage. Will artificial intelligence become the new Big Brother?
This is not the only thing happening in the world of AI in China. SenseTime, one of the leading artificial intelligence companies in China, has sold out Tangli Technology, a security joint venture in Xinjiang. SenseTime is a facial recognition software company that supplies Chinese police. It had set up a “smart policing” company with Leon, supplier of data analysis and surveillance technology in November 2017 and it has now sold its 51% stake in Tangli to Leon. It was stated that the company would continue with his strategy, involving key technologies mastered by its team. A previous statement noted that SenseTime had decided to sell for reasons of its own development. The Chinese government has built a network of extra-legal internment camp in Xinjiang, from which SenseTime is stepping back by selling the participation in the joint venture. The company is also planning an IPO and has several backups from different companies such as Fidelity International and Qualcomm.

It is well known that AI is a threat for different things, such as labour market and self-education of AI. But on the other hand, it offers glorious perspectives in different fields such medicine, education, transportation, data management and so forth. China is a threat to US in the development of AI and the huge challenges it develops, and US should watch its back.