China: The Recent Uninvited Guest To The M&A Tables

Chinese companies’ appetite for outbound M&A has nearly tripled in the past three years, moving from $259 billion in 2013 to $735 billion in 2015. The slowdown in the domestic economy led the country to rebalance from an economy driven by exports to one driven by technology and consumption. An effective shift to the latter requires China to build industrial know-how and to leverage on the rising middle class. However, such an increase in technological expertise would prove hard to develop organically, at least in the short term.

Therefore, to stay ahead of the curve, several Chinese firms have looked at North America and Europe for potential M&A targets. In 2015, China outbound M&A reached $59 billion, an 18% increase compared to 2014. This number was easily eclipsed in the first four months of 2016 with an astonishing $96 billion, a more than five-times increase over the same period in the previous year. Some of the largest recent transactions involving a Chinese buyer include ChemChina buying Syngenta, Haier buying GE Electric, and Dalian Wanda buying Legendary (the film studio behind Jurassic Park). However, this deal-making boom appears to be precarious. Since many of the Chinese offers were unsolicited, they have faced push-back on their bids. 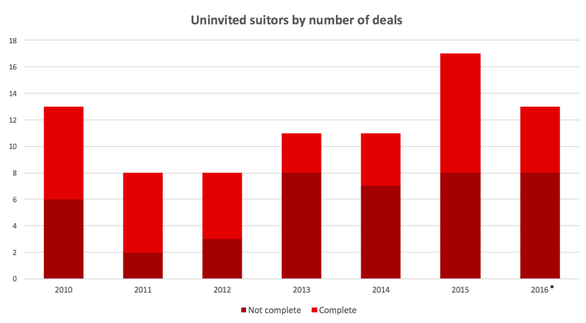 * Up to June, 2016
Source: Wall Street Journal
In the first half of 2016, according to Dealogic, 13 Chinese companies have made a total of $78 billion worth of unsolicited offers for overseas targets. Of these, only 5 were completed. While still a new phenomenon, this happened in 2015 as well. Out of the largest 50 Chinese overseas deals in 2015, 26 were completed (for a value of $59.1bn), 19 were still pending in June 2016 (for a value of $84.2bn), and 5 have been withdrawn (for a value of $24.8bn). For example, one of the deals that was most impacted by an uninvited Chinese firm was the acquisition of Starwood Hotels by Marriott. The deal, which was announced in November 2015, was still not official in March 2016, when a group led by Chinese insurer Anbang entered the negotiations. The original deal with Marriott was mainly a share-based acquisition, whereas Anbang offered a higher all-cash payment. A bidding war started, and as a result Marriott returned with an even higher bid, pushing the value to a total of $13.6bn, leading Anbang to leave the negotiations. The Chinese companies’ surprise approach can be risky, even when they are willing to pay a high premium. In fact, in many cases the Chinese bidders have forfeit as they fail to secure financing or regulatory approval. According to Dealogic, almost half of the unsolicited offers made by Chinese companies over the past five years failed. This string of failed purchases, combined with the artificially weaker yuan, is likely to make future Chinese acquisitions tougher.