High levels of Chinese debt have worried its government for years and officials have tried to introduce policies which are set to decrease debt; however, little effect has been seen as the build-up is continuing, reaching an incredible three times the size of the Chinese economy.

Chinese debt has accumulated to risky levels as the debt from the non-financial sector has gone up to 260 per cent of gross domestic product. The Bank of International Settlements has reported that in 2007 it was $6tn while now it is $29tn. It is also worrying that this immense debt has caused a credit inefficiency. The International Monetary Fund underscores that 10 years ago 1.3 units of credit was able to lift the GDP by one unit while in 2016, 4 units were needed to achieve the same goal. Still, China’s debt-to-GDP ratio is not very different from the US one but Chinese companies contribute to a very big part of the debt. Corporate debt is 160 per cent of the GDP, which is why it is the most leveraged corporate sector.
​
While the government debt of China is kept constant at 47 percent of the GDP, there is a severe increase in the household debt. Household consumer loans have gone up almost 30 percent since the middle of last year, this increase poses a serious question for Chinese policymakers.
An analysis conducted by Reuters of 2146 Chinese listed firms points out that their debt has risen by 23 per cent from last year, the highest growth for the last four years. The research also showed that debt in the real estate sector multiplied the most with a share of the total debt going up by 7 percent.  Next in line are industrial firms, whose share in the total debt grew by 3 percent.

​State-owned enterprises also constitute a potential problem as their debt has risen by 27% from last year which is a worrying figure. This is not surprising, however, as companies have been encouraged by the state to expand and rely on more leverage.
​
If China wishes to have sustainable growth and decrease its debt, it is best to deleverage. A good way to do this is to make local governments liquidate assets and appoint a portion of them to debt reduction. The government is taking a lot of measures to deal with the debt: some are making state firms and local governments trim down borrowing and control the short-term flows of funds from banks. The push for China’s deleveraging has heightened since last year, as the government put into effect stricter and unifying rules on asset management business, which the central bank says is approximately a $9tn market. The reforms aim to decrease the investment risk and put the asset management industry on a healthy growth path; the rules include ban on principal guarantees and on capital pools which are products with different risk levels, maturities, investors, and leverage caps. We are still waiting to see whether these rules are going to have an effect in the long term.
​
A concern for analysts is that investors are putting their money into unregulated or lightly regulated wealth management products that have a bigger return than bank deposits. These wealth management products are distributed by banks, insurance companies and other financial institutions, scarcely supervised by regulators, which have caused the surge of the non-standard credit assets or the shadow banking sector. This is a big problem for China’s financial market as it is becoming unstable and risky. 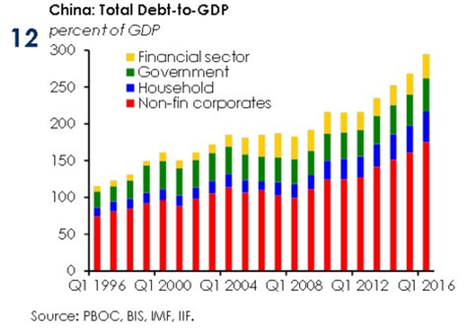 ​The soaring levels of Chinese debt which economists say are going to continue to grow poses the threat of a financial crisis for China’s economy. It is estimated that the country’s debt will become 327 per cent of GDP by 2022, which is double the amount it was in 2008, making China one of the countries with the biggest debt in the world. Even though a crisis can be avoided by the Chinese government, an excess of debt might slow down the country’s economic development which has been remarkable in the past years. This is because a high debt creates uncertainty about distributing future debt-servicing costs thus creating speculation of potential financial distress.

Another noteworthy effect of the immense Chinese debt is that global investors are getting worried that the levels of credit in China might not be supported in the future. Specialists say that there is a risk in opening the whole Chinese market to the world, as this could support market distortions and even worsen the already bad allocation of investment in the economy. So, until it deals with its growing debt, China might turn its look away from the foreign markets. This, of course, is bad for westerners as they heavily rely on their investments in China.
​
In the regular Communist Party Congress, China’s leader, Xi Jinping, assured that the government is ready to accept lower rates of economic growth so that they give a chance to minimize the financial risk and turn to more stable growth, which will be beneficial not only for China, but also for everybody involved, directly or indirectly, with China’s economy.
Dimana Tzonova