Over the past 40 years, China has sustained a strong economic expansion with growth rates averaging 9.5%;  this has brought rising energy consumption. However, 2020 marked a turning point in the country’s energy and climate policy, with the end of the 13th Five-Year Plan and the announcement of climate neutrality by 2060. Clean energy represents a major element in China’s long-term efforts to ensure economic development, energy security, and technological modernization.

During the past decade, the ‘Big Coal Country’ has remained reliant on coal and imported oil: due to low costs, fossil energy powered economic growth. In 2020, China consumed around 49% of the total global coal, being its largest producer and consumer of the world. According to China’s Bureau of Statistics, coal accounted for 56% of energy consumption in 2021, and it is mainly used to produce electricity, despite the rise of new sources of renewable energy. This percentage has declined over the years, but the absolute level of use has risen in recent years due to an increased demand for energy. Beyond these figures lay the reasons for such dependence on coal, which is connected to China’s history, geography and politics. First and foremost, China has abundant coal reserves, while it is poor in oil and gas.

In fact, only 10% of the consumed coal is imported, as opposed to 70% of oil and 50% of gas. Coal has historically been a cost-competitive and easily-accessible source of energy, and it has played a crucial role in sustaining the Chinese economic boom, especially at its early stages. Secondly, there are the geopolitical issue of energy security, and the historical memory of sanctions, which fuels the fear of international isolation. Since China mines its own coal but heavily depends on imports for oil and gas, the country must ensure that basic economic activities can be carried out on coal power, even in the worst international scenarios. In addition, the electricity shortages faced in 2021 propelled the government's measures to emphasize the role of coal and stabilize its price. In short, China still maintains a high level of mining and production of coal, while parallely trying to develop renewable energy. Many challenges to energy transition still remain. Alongside electricity shortages that have justified new coal plant constructions and rising carbon emissions, the power market does not encourage investments in renewables and there is a lack of long-term stable renewable policies to support the transformation. 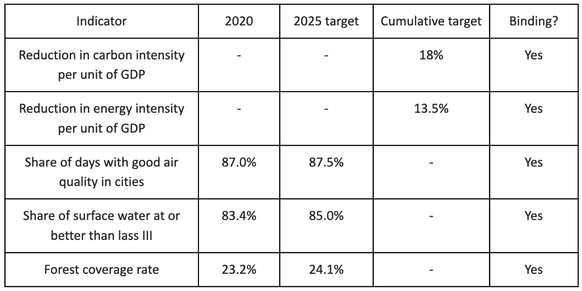 Overview of the coal as energy source

China is still heavily reliant on coal for its energy supply, although it has managed to slowly decrease the share of primary energy from coal, as it can be seen in the graph below. In 2020 the share fell to 56.56%. Instead China is starting to use nuclear plants and renewables. The country remains the heaviest user and producer of coal and half of the world’s coal-fired power stations can be found in China. However, additionally China is the largest importer of coal ahead of India.

​This high dependency on coal does not come without risks. In 2021 the country suffered heavily under the energy crisis and had to implement power rationing because of high import prices for coal. An unofficial ban on imports from the second-largest exporter of coal, Australia, after the country called for an international probe of the origins of the coronavirus pandemic, made the situation even worse. After losses of power a lot of productions had to be shut down and millions of households in the north-east could not use electricity any longer to heat or light their homes. 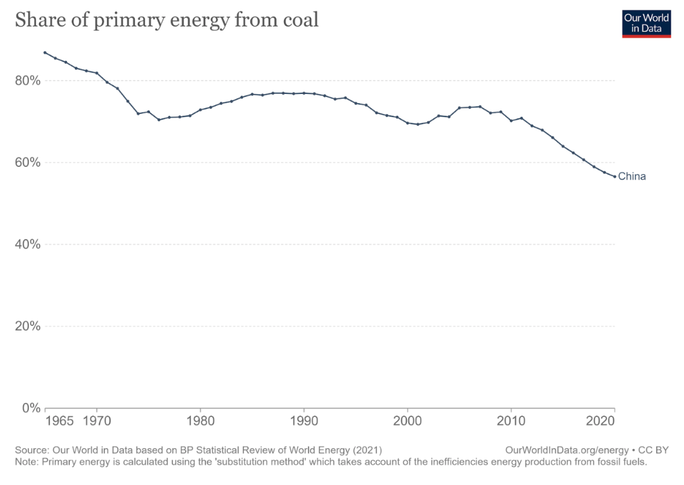 Still, coal remains a reliable source of energy compared to renewables, as renewables like wind and solar rely on the weather and cannot be stored at a bigger scale. Therefore, in light of the current energy crisis, China is starting to increase its coal consumption again. In 2020 the consumption increased by 0.59%, while the coal energy consumption in total has decreased.
The two numbers of increased absolute energy consumption from coal and decreased share of coal in the energy mix of China can be explained by China’s rising energy consumption, which has risen by 2.41% in 2020.

The country has released its Five Year Plan with the target year of 2025 for the energy sector in March 2022, which calls for “clean”, “low-carbon”, “safe” and “efficient” energy consumption and production. There are two themes dominating the plan. The first one is the topic of energy security, which should be reached by increasing domestic energy production. This theme is especially important after experiencing the above mentioned energy crisis in 2021. The second one is to peak carbon emissions by 2030 with the final goal of reaching carbon neutrality by 2060. This of course also has implications for the use of coal, as carbon emissions from the energy sector do come mostly of coal in China. Therefore China has also introduced a target with regards to coal a few years back: the country wants to peak its coal consumption by 2025 and afterwards start to get less dependent on coal.
To reach this goal the country has implemented a number of measures.
Firstly, the country has introduced carbon emissions standards since 2011. This includes an emission standard for thermal power plants for NOx, mercury and So2. Thereby there is an increased cost of producing electricity with coal which is meant to force producers to switch to other sources of energy because energy producers could incur losses for continuing to operate them.

Additionally from 2021 on there exists a national carbon trading scheme run by the Ministry of Ecology and Environment creating a market for emission credits. The scheme will cover eight of its largest carbon-emitting industrial sectors: petrochemicals, chemicals, building materials, steel, ferrous metals, paper-making, power-generation and aviation. In 2021 only the energy sector, which includes coal-fired power generation, is included in the trading. Thereby in 2021 the total volume of greenhouse gas output covered was about 15% of global emissions, which makes the scheme three times bigger than the EUs scheme. The credits are initially handed out to companies for free. The permitted emissions levels will be calculated according to the company’s outputs and not on an absolute level.
Also, China pledged in 2021 not to build any new coal-fired power projects overseas. As the country is heavily involved in a lot of developing countries, this can open the opportunity for China to help these countries to develop non-fossil reliant sources of energy and expand renewable sources instead.


Critical evaluation of the transition plan and its execution

Despite these promises China is continuing to use and grow the use of its coal in order to foster growth and supply the country consistently with energy. Especially after the energy crisis started in 2021 and was worsened with the invasion of the Ukraine by Russia, China is again relying more heavily on its coal energy production. Raw coal production has increased steadily ever since September 2021. According to the National Bureau of Statistics of China its coal production increasement.

Also, China is still building coal-fired energy generating plants. In 2014, the Chinese central government gave local officials greater freedom to approve construction of new coal-fired stations, which resulted in the approval of so many plants that the country’s coal-fired generating capacity increased by a quarteIn 2r. In 2016 these freedoms were taken back while the already approved projects were still finished. In the first half of 2021 there were 43 new coal power and 18 new blast furnace projects announced that by themself will emit Co2 equal to Netherland’s total missions. The coal plants also have another big disadvantage: they are not contributing to lowering the air pollution metrics that the central government has been trying to decrease for a few years by now. According to a study by the world bank, air pollution is the cause of death for 750,000 people every year in China. These facts even lead to protests like the one in December 2011 in Haimen, where 30,000 locals protested violently against the expansion of a coal-fired power plant, which previously was the cause for rising numbers of local cancer patients and environmental pollution. Apart from that there is also the problem, that China’s coal fleet is on average only 14 years old, meaning that there remain at least two decades of life before those power production sites would retire.

However, China is also rapidly expanding into renewables. Today, the country is the largest wind power producer globally and is still investing heavily into renewables, for example in a new 450GW wind and solar energy production site in the Gobi Desert in northern China. But as the energy produced from wind and solar is not really reliable there is always a difference between installed capacity and actual power generation. This can be seen in the fact that 14% of China’s installed capacity is wind, but in 2021 only 7% of China's energy consumption was produced by wind. This problem has been recognised by the Chinese government and therefore, China is starting to convert from one reliable source of energy to another reliable one - unfortunately also from a fossil fuel energy source to another fossil fuel energy source. China has started to invest into natural gas and is for example converting residential heating from coal to gas heating. Therefore, China’s gas infrastructure is now growing at a high pace. The five year plan wants to increase domestic natural gas production by 10% from 2021 to 2025. There is just one problem: as China does not own enough resources of natural gas itself, it will need to import huge amounts of the natural resource, therefore entering into another kind of dependency on other countries.
The above mentioned emissions trading scheme is also criticized for not having any impact. The first reason therefore is an oversupply of credits by about 1.65 bn tonnes of CO2. This has the effect that trading will result in a high carbon price and therefore limit impact. Furthermore the limited scope to only the energy sector with exceptions for other sectors like steel and cement also decrease the efficiency of the program. Also the cap (the permitted amount of emission which does not require buying credits) for emissions is said to be too low to generate meaningful impact. However these kinds of trial phases, with low efficiency, are a good means to get companies used to the credit trading.