China's e-yuan: an overview of the digital renminbi​

​The increasing digitalization of financial transactions coupled with a variety of policy motivations and opportunities is causing a global spike in interest in central bank digital currencies (CBDC). In fact, a survey conducted by the Bank for International Settlements in January 2020 shows how, out of 66 central banks, approximately 80% were involved in different stages of development of a CBDC.
The most advanced country in the experimentation of CBDC is the People’s Republic of China (PRC). After almost 7 years of research and technical trials, The People’s Bank of China (POBC) has already started distributing millions of renminbi in the form of ‘digital currency / electronic payment’ (DC/EP) and expects its payment platforms to be fully operational and adopted country-wide by the beginning of the 2022 Winter Olympic Games of Beijing.
Despite the lack of public information about the new digital currency, its basic operational framework has been announced by PBOC officials. DC/EP will follow a two-tier structure, allowing a centralized creation and management of the back-end properties of the digital currency while delegating distribution to financial firms. The technological details and the functional architecture of the system are still under debate. However,  the numerous patents filed on the project since 2016 suggest a basic framework independent of blockchain or distributed ledger technology (DLT).

DC/EP transactions are fully traceable: the PBOC will have complete oversight over the use of the currency. Furthermore, the digital renminbi will only provide ‘controlled anonymity’: users’ anonymity in transactions and personal information is protected from other third parties, but the PBOC will have all the tools and data to supervise, control and potentially limit citizens access to currency.
Some unique features of the digital yuan include the possibility of transferring money without the need to connect each account to a bank deposit and the introduction of offline cashless transactions. Users will be able to spend their currency through digital wallets in the form of specific applications in their smartphones. Moreover, the PBOC is exploring possibility of integrating this system within “internet of things” devices such as car plates; such a level of customization would further develop an economy which is already a leader in cashless transactions. 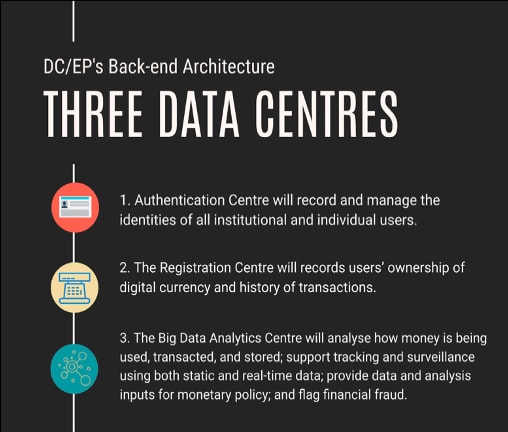 ​During the last decade, while the US mostly focused on upgrading its credit/debit card bank-based system, China experienced a transformation of its retail payment structure.
After the government’s refusal to allow players such as Visa, Mastercard or American Express to enter the market, Chinese banks worked together to create UnionPay card-based network. Surprisingly enough, this system failed to become the country’s dominant payment system mostly due to oppositions of merchants to heavy fees and costly tech requirements.
This situation, coupled with essential technological innovations such as smartphones and the QR code, created the perfect conditions for the birth of two new payment systems: Alipay, running through Alibaba, and WeChat Pay, running through Tencent.
These platforms, run by China’s own tech champions, have come to dominate C2C, retail and most business transactions, robbing banks of revenues from payment intermediation.

Source: Statista, Xinhua, China Plus, Tech in Asia
​The two players’ unstoppable growth is stunning, both in terms of size and rapidity: today, WeChat Pay and Alipay appear to be the primary payment method among over 90% of people living in China’s greatest metropolises. More than 92% of the over 277 trillion yuan worth of mobile payments in 2019 were made over these two platforms. On the other hand, the more traditional card and cart-based debit/credit are respectively the second and third most preferred payment system.
Nonetheless, the introduction of the digital yuan threatens to destroy this duopoly.
PBOC’s agenda: controversial objectives of the DC/EP

​Reasserting control over privately owned fintech industry giants: China’s banking system is a key element of China’s Communist Party’s (CCP) economic power. The issuance of DC/EP is in line with a series of decisive actions undertaken by the party-state in past years to harness the growth of private tech giants. Before 2017, for instance, Ant Group (controlled by Alibaba) and Tencent could use customer funds (deposits in their AliPay or WeChat Pay accounts) to earn interest for the business by parking them in highly liquid accounts. The Chinese Government moved swiftly: today, these firms must deposit 100% of customer funds in a non-interest-bearing account at a Chinese Bank. Similarly, Government effort in this direction tanked Ant Group’s planned 37-billion-dollar IPO in 2020. With the digital yuan in final testing phases, Chinese authorities hope to finally undercut these firms and now pose a very real threat to their over 2 billion user base.

Enhancing the Government’s system of surveillance and control: DC/EP has very little in common with cryptocurrencies such as BitCoin and Ethereum. The latter are decentralized, while the digital renminbi is a CBDC, issued and backed by the central government. Given DC/EP’s status as legal tender is guaranteed by the State, this currency should not experience the same levels of unpredictable volatility that have excluded US cryptocurrencies from a wide use in day-to-day transactions. Nonetheless, the e-yuan’s characteristics were designed by the CCP with a very precise objective: maintaining a tight grip on society by strengthening its surveillance state. DC/EP’s digital format allows the POBC to trace in real time all transactions at the individual level. While this will surely provide the PBOC with data of unprecedented quantity and accuracy, enabling it to fight money laundering and to implement more accurate policies, its use as a tool of further domestic control should not be overlooked.

​The DC/EP project will impact primarily the Chinese economy, but it soon could be exported overseas. The Chinese party-state formed a joint venture (Finance Gateway Information Services Co) with international payment system Swift in January aimed at promoting the use of the e-yuan. Over time it might further incentivize the use of their digital currency for cross-border transactions. The PRC also hopes that DC/EP will contribute to the  internationalization of  the renminbi, with the long-term objective of challenging the primacy of the dollar in trade settlements.
Although this outcome is unlikely in the short term, given fragile property rights and obscurity of Chinese markets, liberal democracies should assess the risk that, eventually, DC/EP could enable the party-state’s ability to shape economic behavior well beyond the borders of the PRC.