China has the world’s fastest growing economy averaging a growth rate of 10% over the past 30 years. Driven by its manufacturing sector which exports goods that are consumed all over the world, in 2017, China’s economy was the second largest by gross domestic product and the largest by purchasing power parity. The country’s economic growth is slowing down leading to an expansion of merely 6% this quarter which is considered to be quite low for the Chinese economy-a reason for people to worry. Substantially there is nothing wrong with 6% as China exhibits almost one third of the global growth each year which means that it creates jobs and improves the living standards. A slowdown is normal and can be  expected after a period of time but a plunge can be catastrophic. If this slowdown accelerates then the effects could destroy the global recovery. 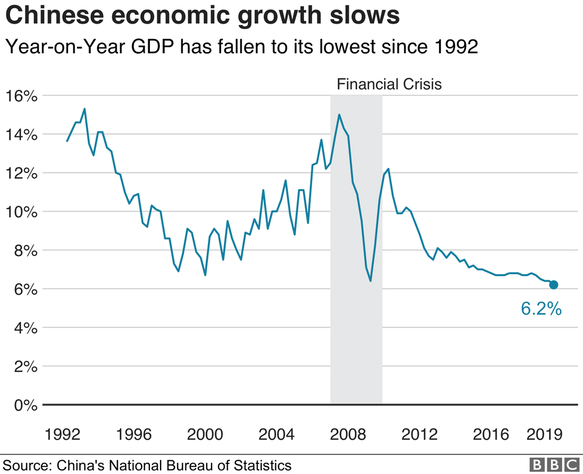 It has affected everything from factory output to the jobs market as office vacancies have reached a decade-high this quarter. The reasons behind the decrease of the economic growth are multiple. A substantial roadblock could come from the uncertainty of how restrictive the trade war between the United States will be in exports of Chinese products.

The strict U.S. tariffs have forced imports from the United States, Japan and South Korea. The government is trying to offset growth of these tariffs by introducing a series of supportive policies. There are economists who believe that this slowdown will continue until the population ages and wages rise in order to meet global standards. In the past, the advantage of the Chinese economy was the low wages that gave the opportunity to the companies to have lower production costs. Now the manufacturing sector requires even less labor as technology has replaced manpower.

​Economists assume that China should move from the manufacturing sector to services like other developed counties have done. A moderate balanced growth with less than 8% would raise employment and private consumption more quickly than an unbalanced growth. Unfortunately, things are expected to get worse as business confidence and activity is less throughout the world. Across Asia and Europe factories have begun to feel the pressure while in the US the growth sends mixed signals. Meanwhile, the rise of tariffs in China have led companies to shift their production to other countries such as Vietnam and generally Southeast Asia. Recently executives of big companies such as Home Depot Inc., Best Buy Co. and Urban Outfitters Inc. told investors that the suppliers are working to produce products outside China to avoid tariffs. This quarter, all the means to measure global trade were below the average. 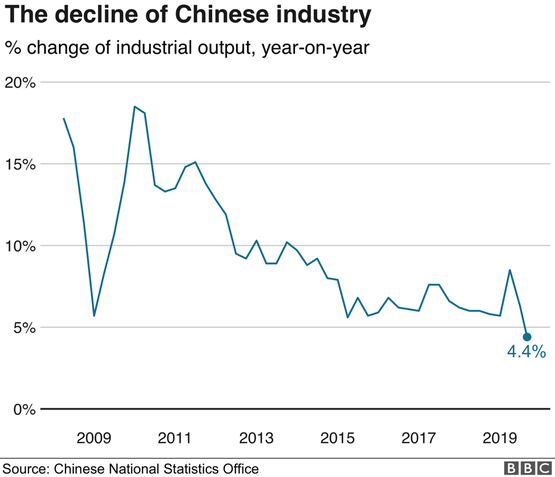 This slowdown of the Chinese economic growth has a huge impact on the world. First of all, the sales growth on retail sales in November 2018 was only 8.1% being the slowest rate in the last 15 years. Another important factor is that China is a key player in keeping the price of oil high. The drop in the auto sales and industrial output have reduced the demand of oil in China. In order to prevent reducing the refineries output, exports towards the rest of Asia began and more specifically the price of oil in Singapore and South Korea dropped. Moreover, in Singapore due to excess supply in December 2018 the price of oil hit a price record low.

In addition, Chinese people are essential to education and tourism in Australia even though they made up only the 15% of the international visitors, the Chinese accounted for 25% of the total expenditure in Australia last year. In 2017 they contributed to 54% of college tuition payment in Australia. Navitas that runs College programs for international students says that Australia is not attracting as many Chinese students as it did in the past. Another interesting factor that indicates the consequences is that Sydney’s airport says that there is already a decreasing number of incoming Chinese.

Therefore, this has become a problem for the economy of Australia as it leads to a decrease in the prices of housing and a lower growth in wages. Generally, in countries that are dependent on commodity exports, like Brazil, Canada and Indonesia, the slowdown could have a negative effect on their GDP growth. Yet, for countries in Europe and the U.S. that consume the commodities, the fall in their price could be beneficial.

​In September the Chinese Central Bank stated that it will inject 900 billion yuan which is equal to 126 billion dollars, in order to urge lending. The government is planning on cutting nearly two trillion yuan of taxes and to use government debt to renovate many old buildings. Finally, the People’s Bank of China demanded from the banks to boost small firms and increase liquidity for smaller banks.