The largest population in the world and an aging trend has made pharma one of the most important and growing industry in China. In particular, China is the world’s second-largest pharmaceutical market, worth $130 bln and still expanding at a fast pace. Key in Chinese healthcare is the reimbursement scheme, the medical insurance system first adopted in 1998 that is now covering the majority of the population. This system requires participants to contribute with a monthly insurance premium, being then granted a full or partial reimbursement on medicines included in the National Drug Reimbursement List (NDRL), with the patient required to contribute up to 30% of the price (but only for new, non-clinically necessary drugs).

The Chinese pharma industry is dominated by domestic companies, enjoying a 70% market share and whose drugs are listed in the NDRL, meaning that their products are the first choice for 1,4 billion people. This predominant position, the presence of a state-run insurance scheme and industry growth is reflected in Chinese pharmaceuticals’ incredible financial results; for example, Sino Biopharmaceutical, one of country’s biggest, experienced a 116% stock rise last year, while smaller peer CSPC Pharmaceutical had an 85% bump, with many others experiencing a similar growth.
​
The graph below shows how major Chinese pharmaceutical companies experienced significant stock prices increase during last year, despite non-linear price trends during the period. 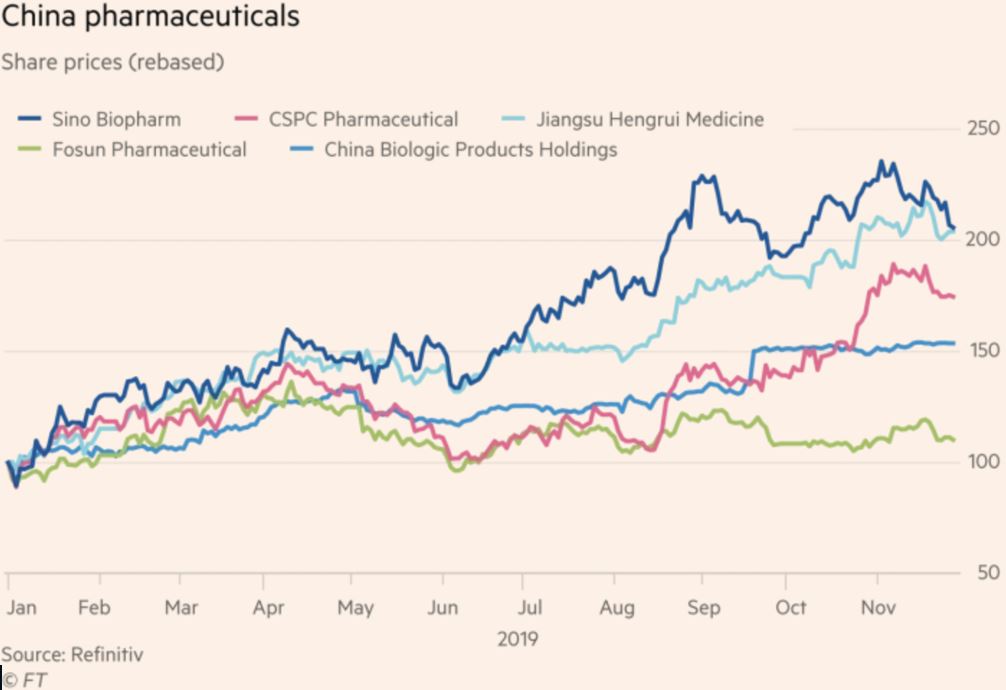 The reimbursement scheme implies that a pharma company whose drugs are listed in the NDRL may enjoy a fairly secure end market, which, due to an aging population, is also growing. It is not surprising then that global pharma players are eager to consolidate their presence in the market and to obtain a growing number of drugs accepted in the insurance scheme. Besides, downward pressures on drug prices in western countries, especially in the US (the global largest market), make large players like Merck, AstraZeneca and Roche progressively more in need of higher volumes, which can be absorbed by the Chinese market.

Recently these companies have negotiated with the Chinese government to add some of their drugs to the NDRL; they reached their goal but at a high cost. Western pharmaceuticals had indeed to agree on large price cuts, up to 85%, with an average price cut of 60% on newest drugs, to get their names among the 2700 drugs listed for reimbursement. Beijing also negotiated further cut on 27 drugs that were already reimbursed under the scheme, reducing their price by a further 26% on average. This means that western drugmakers are now selling their products in the Chinese market at the lowest prices globally.

Mixed feelings have welcomed this news, with analysts agreeing that the Chinese market is too large and too expanding not to enter but at the same time claiming that price cuts may be excessive. Worsening price mix, even if supported by larger volumes, together with high and growing R&D expenses, may further squeeze margins and reduce profitability for these companies.
​
We can thus say that Chinese authorities have taken an upfront dividend while it is still to be proven whether larger volumes will overcome low prices’ negative effects, making the overall operation profitable also for pharma companies.