Chinese tech companies and their regulations: why something is changing

Introduction
​
Today, China’s internet population stands at approximately 1.03 billion people and is only expected to grow in the next few years. The country’s internet and big tech industry is dominated by players such as Alibaba, Bytedance, Tencent, and Meituan. In an effort to balance the industry with the country’s state-run capitalism model, the Cyberspace Administration of China serves as the industry’s watchdog. While beneficial for China’s economy, the growth of big tech has led to other concerns, such as food delivery worker conditions and the dominant effect of the gaming sector on the country’s youth; the relative strength of internet companies also poses a threat to the control the Chinese Communist Party (CCP) holds. Thus, it is unsurprising that the government has taken steps to curb this concern by securing a strong foothold in the industry. Nevertheless, the surge in regulatory actions has inevitably slowed the industry and increased uncertainty among foreign investors. Since December 2020, there has been a steep decline in investment in China’s internet industry (shown below). 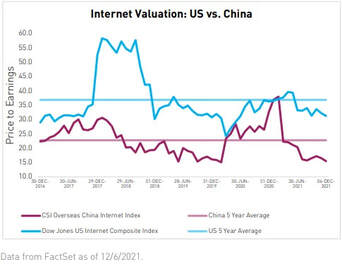 Internet Valuation: U.S. vs. China    Source: KraneShares
Now, with the Chinese economy slowing, China may look towards its internet industry to stimulate growth. Recent predictions expect regulatory action to slow, or at the very least, become more defined, removing some of the uncertainty that has been plaguing the big tech industry over the last few years. This article will examine China’s increased regulation of big tech and address how and why regulations might change over the next few months.
​
How have Big Tech companies previously been regulated?
In November 2020, Xi Jiping, the General Secretary of the Chinese Communist Party (CCP), addressed the country to share the CCP Central Committee’s plans for the 14th Five-Year Plan (2021-2025), National Economic and Social Development and Long-Range Objectives Through the Year 2035. A key component of Xi’s outlook includes “common prosperity,” which aims to moderate wealth for all. As big tech grew, it also brewed resentment among smaller businesses and workers themselves. A small restaurant owner shared her grievances with CNBC: she faced higher commission fees from Meituan after listing her restaurant on two food delivery platforms during the pandemic. Additionally, Meituan faced criticism for underpaying its delivery workers and imposing dangerous conditions for workers to execute fast deliveries. As a result, Meitaun was ordered to pay its workers local minimum wage, and the State Council expanded gig-economy workers’ access to health insurance and pension plans.
In addition to increasing workers’ bargaining power, the government also aimed to crackdown on its internet companies by acquiring a stake in the industry itself. In April 2020, WangTouTongDa, a subsidiary of China Internet Investment Fund and controlled by the Cyberspace Administration, acquired a 1% stake in Weibo for 10 million yuan. Then, in August 2021, ByteDance sold a 1% stake as well. Each stake was accompanied by an appointment to the companies’ boards. By integrating itself with tech companies, the government ensures that its agenda is aligned and promoted within the companies itself, thereby making the execution of regulatory measures much easier. Such positioning also allows the Cyberspace Administration to have more control over the content shared through the platforms. In doing so, the CCP is able to maintain its power and the ways in which it can manage the Chinese economy. If the large tech industry became too independent, its power could easily rival that of the Party itself.
In just 2021 alone, other regulatory measures included suspending downloads of Didi (a ride-hailing app) over data protection concerns, hitting Alibaba with a $2.8 billion antitrust fine, and accusing the gaming industry of having a negative effect on youth, calling games “spiritual opium.” In fact, regulation on the gaming industry was far reaching: not only did China impose a 3-hour per week gaming restriction on minors (August 2021), but the National Press and Publication Administration (the governing body that approves gaming licenses) has significantly decreased the number of games it approves. 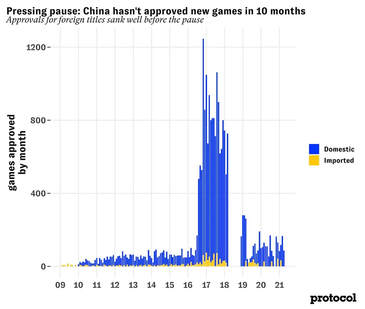 Approval of Games in China 2009 - 2021     Source: Protocol
Ultimately, China’s campaign to regulate big tech is reflected in the drop of the KranShare’s CSI China Internet ETF (KWEB), which includes Alibaba, Meituan, JD.com, and Tencent among others. The fund’s average annualized percent net average value is down 57.99% in the last year.

KranShare’s CSI China Internet ETF (YTD)     Source: Google Finance
Chinese Tech companies and their regulations: why is a change expected in the next few weeks?
According to sources familiar with the situation, China is planning to put a halt to its months-long campaign against technology businesses.
The pledge comes after a sweeping crackdown on some of the country’s greatest private enterprises which began at the end of 2020, when the government slapped the brakes at the last minute on Ant Group’s intention to go public. Since then, uncertainty and volatility  have characterised the Chinese stocks on the international stock markets, causing a loss of investing interest towards the country’s businesses and thus triggering a wave of stock selloffs.
Moreover, due to the incessant hit of the COVID-19 pandemic and the continuous lockdowns imposed by the Chinese authorities on the main economic and financial centers of the country, a precipitous worsening in the country's economic outlook is expected.
As a matter of fact, in the last month, a number of investment banks have lowered their growth predictions for China. The International Monetary Fund forecasted a 4.4 percent GDP this year, down from 4.8 percent previously, citing dangers posed by Beijing's rigorous zero-covid policy. All these predictions are far lower than China's official prediction of 5.5 percent, too.
For the reasons briefly mentioned above, the government led by Xi Jinping is quite concerned with the slowdown, and it is thus expected to stop the sweeping regulatory clampdown on the tech sector and allow internet platforms to play a bigger role in helping to shore up the faltering economy.
On  the heels of a Politburo meeting held on April 29th, where the top leadership vowed to speed up the implementation of a mixed fiscal and monetary policy to increase the country’s productivity, and where it was as well agreed that the government will promote a “healthy development” of the internet platform economy, China will hold a symposium with the country’s big tech companies in the next weeks. E-commerce platform Alibaba Group Holding, social media and video gaming behemoth Tencent Holdings, online delivery and on-demand service platform Meituan, and TikTok owner ByteDance were among the companies invited.
In Friday’s meeting, the government also stated that it will normalise supervision over the IT sector and devise particular measures to help the business.
Although no certain regulations have transpired yet, according to some rumours, regulators are intending to hold off on new rules that limit the time young people spend on mobile apps and are considering pushing some of its biggest tech companies to offer 1% equity stakes to the state and give the government a direct role in corporate decisions.
By taking a small equity stake and more of a role in companies’ operations, the government ensures that the tech companies are aligned with its broader policies, while the companies themselves generally do not oppose the government stakes, reasoning that it helps them manage otherwise uncertain policy risks.
Another possible policy is that the government will bolster the economy through the distribution of consumption vouchers, to be used exclusively on Chinese online services providers. For instance, some municipal administrations have already begun to distribute vouchers to residents over the internet. Meituan and e-commerce service provider JD.com are giving out 500 million yuan (US$75 million) in coupons to Shenzhen residents.
Finally, markets have already reacted positively to the upcoming changes in regulations. In fact, the Politburo statement on Friday was issued in the early afternoon, breaking with Beijing's tradition of releasing statements outside market hours. When the afternoon trading session commenced in Hong Kong and Shanghai, investors hurried to acquire shares, causing Chinese tech companies to rise.
At the closing of Friday’s trade, Alibaba was up 15.7%, Tencent was up 11.1%, and Meituan was up 15.5%.

Conclusion
In conclusion, it seems clear that China is willing to stimulate its economy and alleviate the  negative trend which nowadays characterises the country’s economy. The key message for tech companies is that through less strict regulations, the state will encourage them to grow and play a role in the efforts to bolster the economy, which for the better part of the last two years, has been battered by COVID-19 controls.
It is essential to remark, finally, that any relaxation of laws for the IT industry would highlight significant economic stability for Chinese President Xi Jinping, in a pivotal election year during which he is likely to defy recent history and run for a third term. However, times are not yet mature enough to understand nor foresee how significant the changes will be, since it should be kept in mind that the Chinese government will not easily give up its control over such a driving industry.