That climate risk is a form of investment risk has rapidly shifted from being an abstract idea in the investment world to something deeply embedded in the mainstream thinking. This shift has been the consequence of four mutually reinforcing forces that have been in place in the last few years. First, the damages resulting from the extreme weather conditions – rising sea levels, hurricanes, wildfires - have emphasized the importance of pricing in the negative physical impact of climate change, which may affect a great part of the asset classes; second, the new regulatory directives have made clear that the long-term goal of building economies that no longer emit greenhouse gas is becoming a priority for most countries worldwide; third, the emergence of new technologies is promoting renewable energy innovation, which is contributing to reduce the costs and the carbon intensity of energy production; lastly, investors’ preferences seems to be turning in favor of environmentally friendly strategies.

But while more and more investors recognize climate risk as an investment risk, and as such they incorporate it into their portfolios, putting into practice “climate investing” is not an easy task. Until recently, divestment has been the main strategy to express the new emphasis on climate concerns. However, it has been the recent development in data and analytical tools that has catalyzed true climate investing. An increasing number of investors, from asset owners to wealth managers, are now turning to climate-oriented ETFs for a liquid and efficient way to build portfolios that show the new emphasis on a low-carbon economy. As a matter of fact, ETFs offer the most convenient and low-cost access to an innovative equity investment strategy capturing company’s exposure to transition risks, thus providing investors with an innovative approach to “green” investing.

Today, there are about 600 sustainable ETFs available globally, most of which enable investors to customize portfolios around climate needs, from reducing carbon exposure, to prioritizing a low-carbon transition, to targeting themes such as clean energy.

​However, on Thursday 8th April, a group of institutional investors poured about $1.25 billion into the new Carbon Transition Readiness ETF (LCTU) created by Blackrock, making it the largest ETF launch in the last three decades. The BlackRock ETF invests in the shares of the Russell 1000 companies that Blackrock considers most likely to be successful in the transition to a low-carbon economy, taking into account issues such as clean technology, waste and water management. Companies are rated on the basis of a “carbon transition readiness” score, with data being provided internally by Blackrock itself via Aladdin Climate, and from external providers like Refinitiv, Sustainalytics and MSCI. The expectation is that companies which most efficiently manage to change their way of thinking to meet the low-carbon economy objectives will outperform in the long-term.

By January of 2021, Blackrock was already managing $50 billion in solutions supporting the transition to a green economy, such as green bonds and a renewable power infrastructure business investing in solar and wind power markets. But not happy with that, the world’s largest asset manager decided to offer its investors exposure to the companies that it believes are best adapting themselves to transition risks. As a matter of fact, the climate goals set by the Paris Agreements will force several companies to lower their carbon footprint, thus affecting their long-term profitability. In this scenario, Blackrock CEO Larry Fink said in a letter to his clients that he does not see himself as a passive observer.

Among the top holdings in the new LCTU, Apple Inc., Microsoft Corp., Amazon Inc., Alphabet Inc. and Facebook Inc. The same five companies, in the same order, are the top stakes in the now second largest ESG ETF on the market, the $16.5 billion iShares ESG Aware MSCI USA ETF (ESGU) from BlackRock. Indeed, the tech giants form the bulk of many exchange-traded funds, both in the ESG space and beyond. 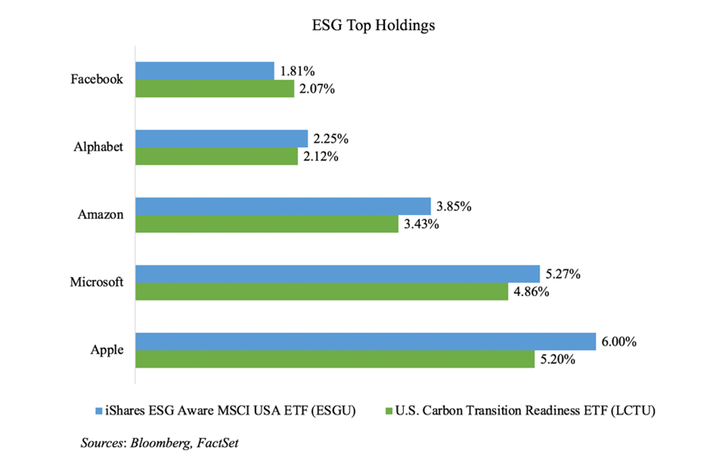 Although the new ETF looks much like other U.S. tech funds, even in terms of major holdings, several key differences exist between funds like the LCTU and the ESGU. While the new arrival is actively managed and aims to target those companies that are best positioned for a green energy transition, the older more-established ESGU only passively tracks an index with a much broader ESG remit. The active management of the new ETF thus represents a true novelty, and it has been voluntarily created to enable investors to build their portfolio in a traditional way as opposed to a satellite way, an approach that has certainly won some early fans. These included the California State Teachers’ Retirement System.

Despite the record launch, many questions exist concerning the ongoing maturity of the ESG sector. The Securities and Exchange Commission (SEC) recently issued a report cautioning that some companies are mistakenly identifying their products as ESG, thus violating security laws in the process. The problem is indeed that the ESG definition is so broad that it is easy to misinterpret it. Even though several consensus issues exist regarding what shall be included and what not, it cannot be denied that ESG ETFs are surging in demand. According to Bloomberg, $ 31 billion were invested in 2020 in these products, almost four times the figure of last year. This pushed the assets to a record peak of $75 billion, a significant increase compared to the total $10 billion from two years ago.

​It is clear that in order to reach the net zero carbon target by 2050, investors need to start now, and ETFs represent the best solution to those investors who want access to a high-grade bond exposure maintaining at the same time a strong sustainability profile. BlackRock’s plan for the next year is to double the number of sustainable exchange-traded funds it currently offers to meet this increasing demand.

​Want to keep up with our most recent articles? Subscribe to our weekly newsletter here