​In today’s rapidly-changing world, shaped by the consumption attitude of new generations, sugary drinks and junk foods are no longer part of the teenager daily routine. Increasingly growing demand for healthier products and for fitness programs, on the other hand, is driving down revenues of large “traditional” consumer groups.
Soda brands have fallen out of favor with many of the younger demographics, including those of the millennial and Gen Z categories: according to a Mintel study, nearly 50% of teens aged 15 to 17 agree that drinking soda is unhealthy. On the other hand, the millennial population is fueling the growth of the coffee market with about 44% of the United States coffee demand. Furthermore, other factors such as the changing culture of developing countries and the increasing number of food outlets, retail stores and cafes are driving the global coffee market growth.

Notwithstanding this dangerous environment, on the 31st of August 2018 beverage giant Coca-Cola announced that it had reached a definitive agreement to acquire Costa Limited, the international coffee brand owned by Whitbread, owner of almost 4000 stores in 32 countries. The acquisition is aimed at the expansion of the existing Coca-Cola coffee lineup through the addition of a global leading brand and the enrichment of the company with strong knowledge across the supply chain. “Costa gives Coca-Cola new capabilities and expertise in coffee, and our system can create opportunities to grow the Costa brand worldwide”, said Coca-Cola President and CEO James Quincey, adding that “hot beverages is one of the few segments of the total beverage landscape where Coca-Cola does not have a global brand, and Costa gives us access to this market with a strong coffee platform”.

On the other side, Whitbread PLC is a British multinational hotel, coffee shop and restaurant company. The rising idea of splitting its hotel and the coffee shop businesses emerged this year in late April and was brought forward by two activist hedge funds, Elliott Management and Sachem Head. Moreover, Paul Singer’s hedge fund has built up a 6% stake in Whitbread, believing that breaking up the company into two listed entities will allow the market to value them properly, creating $4bn of value. Coca-Cola’s $5.1 billion bid came in June at the time when Whitbread was actively working on Costa’s divestment: this resulted in a quick deal, approved by Whitbread’s shareholders in mid-October and which is expected to close in the first half of 2019, after EU and China regulatory approvals.

The transaction is a cash and debt-free deal, that values Costa Limited business at $4.15 billion (after transaction costs), with Whitbread's financial debt and pension fund staying with Premier Inn (the hotel chain owned by Whitbread PLC). This implies a 15.7x EBITDA multiple (or 16.4x if we consider the total transaction value of $5.1 billion). Analysts agree that Coca-Cola is paying a huge premium, especially if we compare the Total Value/EBITDA of 16.4x to the 13.0x multiple that Nestlè paid for Starbucks’ market rights in mid-2018. “A huge premium to that implied by the market: We valued Costa at £2.5bn in our 5280p SOTP based on a 10x 2019E EBITDA multiple”, while "the disposal price of £3.8bn (after transaction costs) implies a 15.7x multiple. We estimate the current share price was discounting a multiple of 8.0x and therefore the deal adds £2.0bn of value or 1075p per share compared to the close price", according to a Credit Suisse team of analysts led by Tim Ramskill. On the same line, Nicholas Hyett, an equity analyst at Hargreaves Lansdown, commented: “£3.9 billion is an undeniably rich valuation and likely far better than Costa could achieve as an independently listed company, valuing its earnings higher than those of the mighty Starbucks, and Coca-Cola is one of the few companies in the world that could justify the valuation”.

The premium can be explained, in part, by the desire to avoid a bidding war with a circle of private equity firms that were informally approaching Whitbread. Secondly, operating synergies are expected to play an important role after the acquisition, with Coca-Cola already using a lot of coffee and caffeine in its production chain and with Costa Limited providing the firm with exceptional experience in the field. Furthermore, Coca-Cola will be able to exploit Costa’s retail chain to improve its global distribution of beverages.
​
Moreover, another key factor is represented by Coca-Cola’s long-term diversification strategy. Given the negative trend of sodas – in the UK, partly due to the introduction of a sugar tax, sales of sugary drinks have declined 11% this year – the company is trying to expand its portfolio and diversify its revenues. Soft drinks sales currently account for 75% of the total, while its long-standing rival, PepsiCo, has already achieved a 50% of “good for you” offerings. A risk reduction will be accompanied by a lower cost of capital, thanks to more diversified cash-flows: this will result in a reduction in the financing needed to expand its businesses in Asia, a market which represents a huge growth opportunity thanks to the coffee consumption boom. 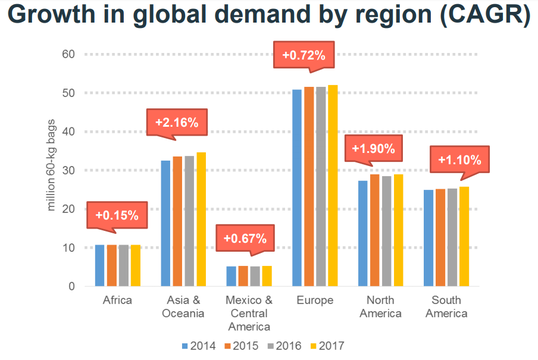 The Coca-Cola Company is advised solely by Rothschild & Co, while, for Whitbread, Goldman Sachs and Morgan Stanley will act as joint financial advisers and joint sponsors on the deal. Deutsche Bank will act as a financial adviser and, together with Morgan Stanley, also as corporate brokers. Coca-Cola hired Clifford Chance as legal counsel and Skadden, Arps, Slate and Meagher&Flom as tax consultant, while Whitbread hired Slaughter & May.