Comeback of inflation in the United States?

Several signs indicate that inflation will pick up in the United States. If the fiscal and trade policies promised by Donald Trump during his presidential campaign will be implemented, they will certainly play a role in the reflation of the US.

The economic program presented by president Trump during his campaign revolves around a massive fiscal stimulus, including infrastructure spending in excess of $1 trillion over the next ten years, and tax cuts as well as a more protectionist trade policy. With a dynamically growing US economy and unemployment below 5% the timing for fiscal stimulus is fairly uncommon and will probably result in higher inflationary pressure from several directions. One driver of inflation could be an acceleration in wage growth that may eventually translate into higher consumer price inflation. The current unemployment rate of 4.8% already signals scarcity in the labor force. The fiscal stimulus will probably increase the growth rate, which will drive labor demand, further increasing the wages paid to employees. Moreover, the scarcity of employees will be intensified by the clampdown on immigration by the government, again resulting in higher wages.

Furthermore, the trade policies envisaged by Mr. Trump are likely to drive inflation as well. The president announced he would reduce the massive current account deficit of the United States, possibly with taxes and tariffs on imported products. Especially consumer goods are likely to become more expensive if there is a tax on imports from emerging markets, especially China. A possible tariff on imports would have inflationary pressure both in a direct and in an indirect way on American consumers. The direct effect will be a price increase due to the tariff on finished goods imported completely from emerging markets. These goods mainly include apparel, toys and other low-tech and manufacturing intensive goods. But tariffs will indirectly harm American companies by making their products more expensive for consumers in the US and around the globe. Since supply chains are completely internationalized, input factors for products will have a tariff added to the current price. For example, most parts of the hardware of an iPhone are coming from several different countries and are assembled mainly in China. A tariff on the parts of the product that combines thousands of inputs will cause unnecessary inefficiencies and increase prices.
​
An important question is how the Federal Reserve will react to increasing inflationary pressures in terms of their interest rate decisions. As traders currently digest the information received in the past weeks, the probability of an interest rate hike in March, implied by rising Futures prices, sharply increased from below 30% in the beginning of February to about 50% on February 27. 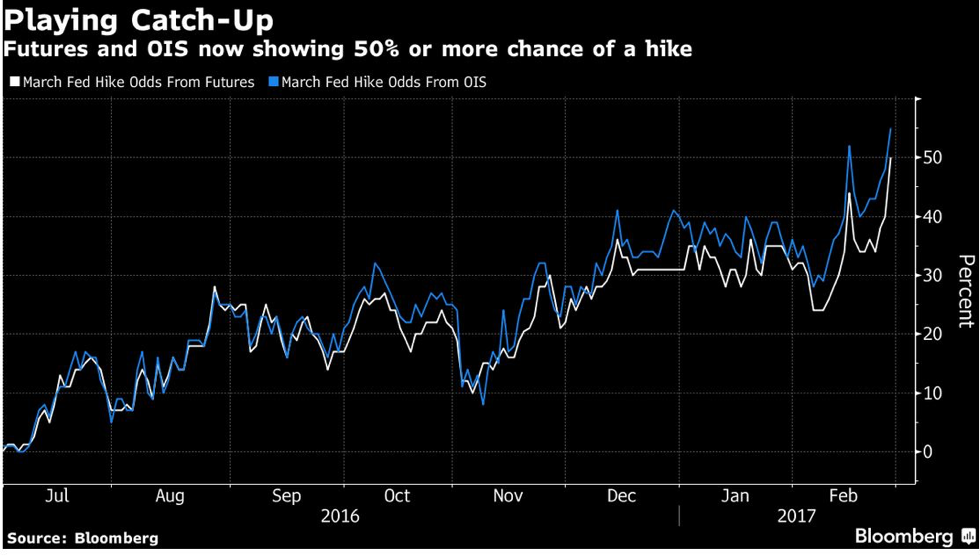 ​Since the end of February, the implied probability of a March rate hike skyrocketed to 100%. The reasons for the substantial reassessment of the probability for a rate hike are because first signs of increasing inflation became visible, even before political measures of the Trump administration have been put in place, and the labor market continues to add jobs at a fast pace. The Consumer Price Index (CPI) for the US, published on February 15, showed a robust core rate (excluding energy and food prices) of 2.3% annualized for the three months through January and a jump of 0.4% month over month in core goods inflation, which is the largest one-month change since 2009. On February 28, President Trump addressed the Congress for the first time in his presidency. His remarks on fiscal policy affirmed markets, removing uncertainty that was looming prior to his speech. After a report from the ADP Research Institute published on March 10, showing the US economy added 298,000 private sector jobs, the largest monthly gain since January 2006, the market completely discarded the possibility that no rate hike will take place and implied probability approached 100%.
​
In conclusion, inflation appears to be poised to increase in the US, which in turn implies a more hawkish Federal Reserve. The market also is convinced of a rate hike in March, which seems to be a reasonable assessment of the current situation and uncertainty regarding key figures and relevant announcements by President Trump.