Despite the continued efforts to shift to alternative green energy sources, oil is still one of the world’s economic pillars. However, it is also one of the most volatile commodities available in the market being affected by a number of different factors. During the unprecedented time of Covid 19, we experienced extreme fluctuations in its price: from a record low at the beginning of 2020, when futures prices turned negative for the first time in history, to the recent surge to over 80$ a barrel. These dramatic movements can have a significant impact on economic growth, thus it is important to understand the causes behind them. The article focuses on the oil prices behaviour through the lens of Covid-19, by looking at the different factors affecting the pricing mechanism.

First of all, let’s take a deep dive into the oil market to understand the primary sources that could affect its price formation and development. Like most commodities, the main drivers of oil price are obviously price and demand in the market. As demand increases (or supply decreases) the price of oil moves up, and goes down in the opposite scenario. Historically, OPEC was the one determining the oil prices through the control over supply volumes. However, in recent years the pricing of the famous commodity has become increasingly complex, being affected not only by the law of supply and demand but also reacting to different factors like geopolitical issues, disasters, market sentiment and environmental trends. But let’s go step by step and take a look at these different drivers one by one.

Economic growth is one of the biggest factors affecting oil demand. The more a country grows, the more the need for electricity, heat and transportation. Therefore, the increase in the price of oil is positively correlated with the improvement in the outlook for GDP. The main countries driving the demand of oil are of course USA and Europe, but oil consumption in developing countries not belonging to the OECD has also risen sharply in recent years, outweighing that of developed ones. In fact, developing countries tend to be biased towards manufacturing industries, which are more energy intensive than the services ones. Therefore, non-OECD economic growth has become increasingly important in determining oil prices, with China being one of the primary contributors to the growth in oil consumption worldwide.
Although the demand of oil is strictly linked to economic activity, energy policies can also have a significant impact. In particular, a potential threat to the global demand of oil is the green transition and the shift towards more environmentally friendly sources of power. In fact, this could be reflected in lower reliance on oil and therefore downward pressure on prices. Similarly, the availability of other sources, like liquefied natural gas, poses a threat to the demand for oil.

As mentioned previously, over the last decades the Organization of the Petroleum Exporting Countries (OPEC) has played a dominating role in oil pricing. The cartel is currently in charge of around 40% of the global supply of oil. However, since the mid-1990s other non-OPEC countries like the United States, Canada or China have been entering the scene, leading to a decline in OPEC’s influence in the oil market. Historically, OPEC has been able to significantly affect the prices of oil by setting production targets for its members. When these production targets are reduced or when members fail to reach them, this puts upward pressure on oil prices. On the other hand, the additional supply provided by non-OPEC countries has put downward pressure on prices. However, both sources of supply can be subject to unplanned disruptions which can lead to higher oil prices. We have seen how the recent pandemic-induced supply shocks have led to a tightening of the oil markets, with strong reactions in the commodity price.
A common indicator to assess the extent to which OPEC can react to these shocks is the so-called “spare capacity”, that is the difference between a country’s oil production and its maximum production capacity. In case of supply shocks, oil producers can take advantage of this spare capacity to offset the reduction in supply. As demonstrated in the graph below, in periods where the capacity was low, OPEC’s ability to intervene in case of supply disruptions or rising demand (strong growth) was limited, thus leading to sharp increases in oil prices. 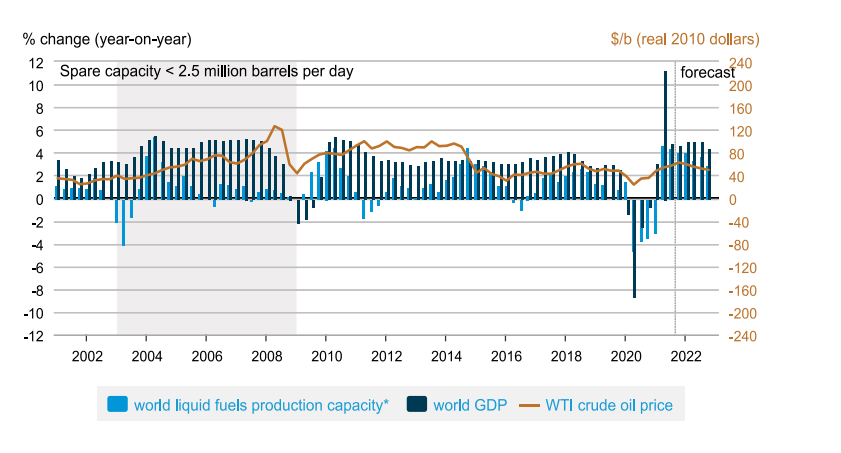 Oil prices can be influenced by events that can potentially disrupt supply and demand or create uncertainty which also contributes to the increase in oil volatility. This is because both supply and demand of oil are inelastic to price changes in the short run, thus a large price change is necessary to re-establish the equilibrium in the market. Historically, tensions in oil producing regions have frequently led to sharp increase in the oil prices. Most recently, weather conditions have also played a significant role in the price movements. The following graph provides an overview of the most famous shocks that have impacted oil prices over time. Notably, we can see the impact of the Coronavirus pandemic which led governments to shut down businesses and restrict travel, with a strong negative impact on oil demand and therefore its price. 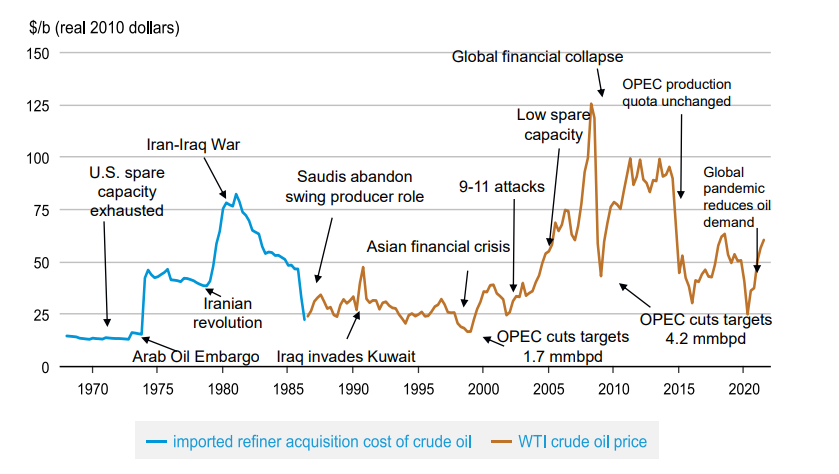 The current price of oil is determined in the oil futures market by the interactions between buyers and sellers of these contracts. Market sentiment plays an important role in influencing oil prices. In fact, the expectations of an increase in oil demand in the future could result in a sharp increase in oil prices at the present as market participants rush to buy future contracts. Vice versa, when they expect oil demand to drop, the same market psychology could lead to a dramatic fall in current oil prices. In recent years, correlations between crude oil futures and other products traded in the financial markets have strengthened. There is a strong positive correlation between crude oil and other commodities/raw materials, as well as between oil and equities. In fact, as economic conditions increase, earnings for companies increase and demand for commodities rises. On the other hand, oil shows a negative correlation with the US dollar and a more irregular but still negative one with Treasury bonds.

1. The Oil Market crash during Covid 19

​Oil has been popularly considered as one of the world’s economic pillars and the most impactful commodity on the global economy and international trade. For this reason, an unexpected price shock can bring dramatic consequences and cause fears and uncertainty among countries.

Indeed,  as a result of the global pandemic that started in 2020, oil demand faced a sharp decline. The outbreak of the virus has temporarily blocked the Chinese economy and turned the US oil prices negative for the first time in history. While oil prices began very strong in January, by April the effect of lockdown and reduced activities brought an oversupply and consequently prices went down dramatically. On April 20th, There was a serious decline of the May 2020 contract future price for West Texas intermediate from 18$ a barrel to less than -$35 a barrel. Furthermore, Brent crude oil, starting from 70$ a barrel at the beginning of 2020, plummeted as well to $9.12 a barrel in April.

Another event that contributed to the oil market crash was the price war between two giants in this market. Saudi Arabia and Russia did not reach an agreement on oil production level and started a war on March 8 that lasted over one-month. The Organization of the Petroleum exporting countries (OPEC) and its allies agreed first to decrease crude oil production to 9.7 million barrels per day for a two month period and then to 7.7 million barrels per day until the end of the year. However, OPEC’s reaction to mitigate lower oil demand was too slow and despite their agreement, crude oil prices touched their lowest levels in more than 20 years.

2. The other side of the coin: why did oil prices recently surge?

In October 2021, Oil price rose above $80 (£59) a barrel, for the first time since October 2018. Oil prices have risen along with a broader rise in commodities, including natural gas and coal, in the midst of an energy supply crisis that is sweeping both Europe and Asia. Oil markets are pushed to new highs and Pierre Veyret, technical analysts at ActivTrades, explains that this is driven by the prospect of a global energy crisis with improving oil demand as winter arrives and as the delta variant appears to be receding worldwide: “The shortage of crude in much Europe due to increased travel, now that the restrictions have been lifted, is pushing oil markets to the new highs” says the analyst.

According to experts, this week’s hikes have set the conditions for a further extension, though they believe that oil prices will continue to rise with tight supply and surging demand. In fact, even with strong demand, OPEC has declared to increase the production gradually by 400kbpd per month, whereas demand is expected to exceed 500k-1mbpd according to forecasts. Global oil supplies have also taken a hit from extreme weather conditions, with hurricanes Ida and Nicholas passing through the Gulf of Mexico and damaging US oil infrastructure. A dramatic surge in natural gas prices (around 120%) has also made oil a relatively cheaper alternative for power generation, which in turn has increased demand.

The energy crisis is a vicious circle and its impact is bound to spread worldwide. China has ordered more than 70 mines in Mongolia to increase coal production by nearly 100 million tons, around 3% increase in the country’s total consumption of coal for thermal use. In particular, being Beijing the world’s largest exporter of goods of all kinds, it’s internal problems could impact the global supply chain, accelerating the inflationary spiral. Craig Botham, chief economist at Pantheon Macroeconomics, declares “Chinese prices are now quite widespread, a consequence of China’s deep involvement in global supply chains”.
Moving to a certainly no less dramatic situation in India, according to the BBC, more than half of the country's 135 power plants are nearly dry, with low inventories. The government assured a stock of 43 million tons (equal to the need of 24 days). New Delhi is the second largest coal importer in the world, despite being fourth in the number of fossil fuel mines. This year, monsoon rains lasted longer than normal, leading to a more difficult extraction in mines. 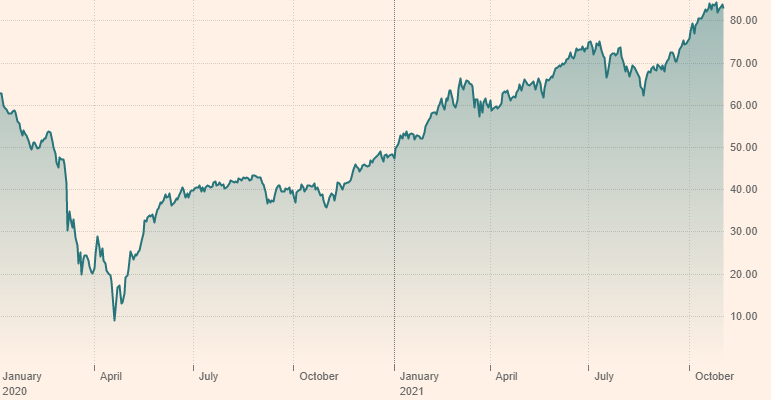 Therefore, because of different variables and events influencing this commodity, the future trend of oil prices can be hardly forecasted. However, numerous analysts at Goldman have predicted that this strong rebound in global oil demand could lead brent crude oil prices to exceed its end of the year forecasts of 90$ per barrel. Hence, the following months will face high volatility induced by moderate demand by investors to protect against another potential spike in oil supply from the Organization of the Petroleum Exporting Countries (OPEC). According to the financial group analysts Mitsubishi UFJ, markets have been confused and turbulent over the last 12 months with long-lasting effects, while the world will come back to normality towards a post-virus equilibrium.