Originally founded by the Swiss politician Alfred Escher, primarily for the purposes of financing railroad expansions and Swiss industrialization, today, Credit Suisse has been able to reckon itself as one of the largest Investment Banks in the world. This development, however, has been achieved through strong growth, complemented by a series of M&As such as the CS First Boston (1990), Bank Leu (1990), Volksabank (1993), Hedging-Griffo (2007), and Morgan Stanley’s wealth management businesses within EMEA (2013). With awards and recognitions that include The Most Attractive Employer, Friendly Workspace, Fair Pay to Women, and Best International Private Bank in Middle East and Asia multiple times, Credit Suisse has successfully been able to maintain a stature well regarded for an investment bank and financial services provider.
However, it certainly wouldn’t come off as a surprise that even a bank as eminent as Credit Suisse has had its worst days within the last decade or so. With AUM of around CHF 1.6 trillion at the end of 2021, the AUM growth over the entire decade for Credit Suisse has only been around CHF 350 billion, given that it was 1.25 trillion Swiss francs at the end of 2010. Comparing this to the $1.81 trillion AUM increase for other banks like J.P. Morgan within the same frame, Credit Suisse certainly seems to have lagged behind. Particularly, Credit Suisse, along with most other banks, had to go through severe credit dilemmas during the Global Financial Crisis. Additionally, being investigated and sued by the American Authorities in 2012 for bundling mortgage loans with securities, wrongly interpreting the risks of underlying mortgages during the housing boom led Credit Suisse to huge volume of losses. In particular, the investment bank cut over a trillion in assets and made plans to alleviate its IB arm by 37% until 2014. Simply enough, when an organization known for its investment banking services reduced emphasis on investment banking and started extensive operations in private banking and wealth management, clients started losing their trust in Credit Suisse.
Considering the Credit Default Swaps, Credit Suisse debt CDS during the Financial Crisis was around 145 BPS, just below Deutsche Bank and Commerzbank. Similarly, the most recent CDS of around 325 for Credit Suisse debt (14-year high) could imply how the bank is always one of the firsts in the CDS race, which palpably is not a good aspect to be a leader for. 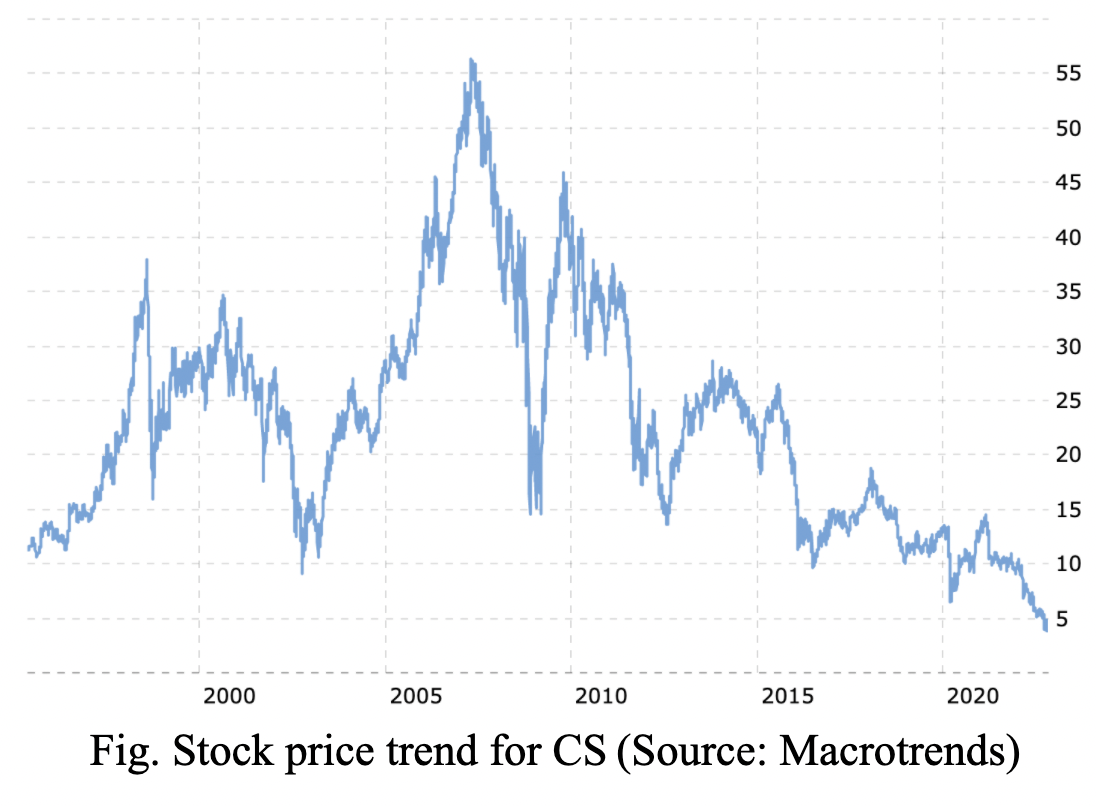 Most importantly, when your “trusted” bank is involved in assistance for tax evasion, loss of trust and goodwill becomes self-explanatory. Something similar happened to Credit Suisse during 2013 when German authorities probed the bank’s subsidiary Clariden Leu, and its regional subsidiary Neue Aargauer Bank, for aiding German citizens to avoid tax payments. The 150 million euro settlement with the government was just an additional monetary cost the bank had to pay along with the derogation of its image. This, followed by the 197 million USD fine for serving over 8500 US clients to avoid taxes in 2014, informally established CS as unethical practitioner in the IB industry. The loss in confidence over Credit Suisse is reflected in the large loss of share prices across the entire Swiss banking sector after 2008, which still has not recovered to pre-financial crisis levels.
With enormous amounts of money paid as settlements, fines, and credit cuts, the 2020 planned restructuring of the bank could have been to reduce costs, improve operational efficiency, and establish itself in the market as an IB giant once again. Does it seem to work? The contemporary situation entails otherwise.
Recently, the issues surrounding Credit Suisse have been hard to ignore. After three years of financial controversy, the Swiss Bank is undergoing a restructuring, aiming to divide the firm into the following business lines: an advisory business, branching out other activities, and, also, creating a “bad bank” to include high-risk assets. However, although CS has recently come under fire due to investor speculation on the capital hole needed to finance its restructuring, can we argue that what we are seeing now has been a long time coming?

Credit Suisse has been littered with scandals and bad press over the last three years. Let’s look at its involvement in the collapse of Archegos Capital Management Archegos Capital Management, an American hedge fund managed by Bill Hwang, collapsed in March of 2021 after its $20Bn wager on shares of ViacomCBS went sour. Credit Suisse was slower than other creditors, including Goldman Sachs, to liquidate its position, ultimately forcing them to write off SFr4.4Bn in related costs. However, the risk of doing business with the fund had been apparent for years, though “shrugged off” according to an independent (Paul,Weiss) report, commissioned to look into CS’ malpractice and inadequate risk management protocol. In fact, Hwang assumed high levels of leverage, taking up risky bets, whilst simultaneously generating CS fees and interest income. In 2020, Archegos was significantly exceeding limits on its level of risk, prompting internal risk managers to recommend that Archegos take up an additional $1Bn in cash to reduce its leverage. However, representatives working with the fund claimed that would be “pretty much asking them to move their business” over concerns of alienating a valuable client. Overall, the 165-page report, by the law firm Paul, Weiss, Rifkind, Wharton & Garrison, highlighted critical problem areas, such as intra-departmental miscommunication and competence, and concluding, “These risks were not hidden. They were in plain sight.”

At approximately the same time as the downfall of Archegos, Credit Suisse was involved in the bankruptcy of Greensill Capital, an Australian and UK-based supply-chain financing firm, whose funds Credit Suisse marketed to investors, worth $10Bn overall. Whilst CS has recovered $7.3Bn to Greensill investors, CS deems $2Bn of funds as difficult to retrieve, on top of the expected $291Mn loss in litigation and contested insurance claims it expects to post over a 5-year horizon.
More recently, Credit Suisse has been embroiled in drama over fraudulent activities across its Wealth Management business line. CS became the first Swiss-owned and domiciled bank to be convicted of corporate crime in a money laundering incident related to Bulgaria’s, Evelin Banev, head of a major European cocaine smuggling operation. Likewise, ex-Georgian Prime Minister, Bidzina Ivanishvilli, accused Credit Suisse Trust in Singapore of $1.28Bn in losses caused by misappropriation and fraudulent mismanagement of assets. Similarly, in October 2021, CS was fined £350Mn in a case of astonishing failings in financial crime controls over its long-running “tuna bonds” loan scandal in Mozambique.
From a reputational point of view, perhaps Ulrich Körner’s restructuring plan into a more streamlined, focused business may allow CS’ recent scandals to be mistakes of the past. What awaits CS is much unknown, however, all eyes will be on the “new” CS, especially whether recent scandals will become artifacts of the past or still synonymous with the business.
Announced on Oct 27th, Credit Suisse has released its new transformative strategy plan. The goal is to create a simpler, more focused, and more stable bank around client needs. The actions include restructuring the Investment Banking Division, Securitized Product Group, and a heavy focus on developing the Markets business line.

Investment Banking Division
The investment banking division of Credit Suisse has been separated as CS First Boston. According to the announcement made by Credit Suisse, CS First Boston will be more focused than Bulge Bracket but broader than boutique. Doing a spinoff with the investment banking division, CS First Boston is seeking an opportunity to make an initial public offering for fundraising. Also, according to Chief Executive Ulrich Koerner, an unnamed investment company has already committed $500 million of injection into CS First Boston, focusing on the advisory and capital markets business line.
It is worth noting that the spinoff and listing of a global lender are unprecedented. Although Blackstone spun off its advisory unit into PJT Partners before with roughly $ 1 billion of annual revenue, CS First Boston is anticipated to generate two and a half times what PJT Partners makes. Based on the revenue generation goal, CS First Boston is positioned in the same ballpark as Evercore and Lazard.

Securitized Product Group
According to the report, Credit Suisse is transferring a significant portion of its Securitized Product Group (SPG) to an investor group led by Apollo Global Management. Affiliates of Apollo and PIMCO will acquire the majority asset of SPG. The SPG is one of the most profitable business lines of Credit Suisse. Credit Suisse is selling billions of dollars of assets and adding more liquidity to the operation and strategic change after the financial losses and scandals.

Markets
With the spinoff of the investment banking division and the sale of the Securitized Product Group, Credit Suisse is going to focus more on trading capability in the future. Fully committed to institutional clients, cross-asset investor products, as well as equities, FX, and rates will be closely connected with the wealth management division. The change will allow Credit Suisse to provide more tailored solutions to the clients and differentiate themselves from pure wealth management players.
​
Outlook
It is difficult for us now to tell if the decision is a wise one or not. Global Banks always argue that it would be better to combine wealth management, trading, and banking under the same roof to support each other, creating more cost and revenue synergies. For instance, Goldman Sachs has stressed the “One Goldman Sachs” mantra, while UBS focuses on the one-bank strategy. The strategy of placing business under one roof provides clients with easier financing solutions, either directly selling banking business to wealth management clients or financing within the bank through debt lending by the commercial bank. According to someone familiar with the issue, Credit Suisse is setting up joint ventures between CS First Boston and the parent company. Credit Suisse's action could be rare work, but we shall look forward to the future of Credit Suisse.

Credit Suisse is a bank rooted in the financial world for hundreds of years that has overcome significant problems before. With the new restructuring process will Credit Suisse get back on the stage, or will it be the next Lehman Brothers?