Credit Suisse’s $4bn share issue: the tip of a much wider strategic plan

Over its centenary history, Credit Suisse has become one of the biggest universal banks worldwide, operating in about 50 countries with more than 47,000 employees. Credit Suisse Group AG’s shares are listed on the Swiss Exchange (SIX), with a market capitalization of about 31.975 billion Swiss francs.

Recently, Credit Suisse announced to raise $4bn through a share issue, which is only a part of the restructuring plan designed in 2015 by Tidjane Thiam, at that time, freshly appointed CEO of the bank. The whole plan is aimed to create value for shareholders, expecting to generate approximately CHF 23-25bn of Operating Free Capital by 2020, of which it is intended to distribute at least 40%.

First of all, the strategy involves partially disinvesting in the investment banking sector and giving a major emphasis to the private banking business. According to David Herro, from one of the Credit Suisse’s biggest investors Harris associates, investment banking is unstable, whereas Credit Suisse was underinvesting in the private banking sector. Analysts at JP Morgan agreed, saying that shrinking the investment banking division would free up capital and allow the bank to shift to a less volatile source of income. Thus, Thiam’s announcement of reducing assets in the Global Markets and Investment Banking and Capital Markets divisions was not a big surprise. The plan of cutting 20% of the least performant assets was not well welcomed by investors, who expected higher cuts.
The latest financial report for investors, referring to 1Q17, instead shows Thiam’s strategy was effective; indeed, the IBCM division generated an adjusted pre-tax income of $149mn, the highest first quarter performance since 2013.

Another fundamental part of the strategy includes reallocating capital towards emerging markets, where it is expected there will be higher growth.

According to forecasts made by Credit Suisse, replicating its successful model in other Emerging markets is the path for success, given the growing wealth management opportunities within those markets. However, Switzerland remains a key element for Credit Suisse because of its stability as an earnings source. Adjusted pre-tax income generated by wealth management operations of the Asia Pacific division grew by about 67% in 1Q17 with respect to 1Q16.

Net new assets related to wealth management operations went up by 24% on a year-on-year basis. However, sustainable growth cannot be achieved only with an increase in income and assets. Indeed, the third part of Credit Suisse’s policy is about cutting costs, to internally raising capital. For this reason, recently the CEO and his top managers voluntarily decided to cut their bonus by 40%. Adjusted operating expenses reduced from CHF 21.2bn in 2015, to CHF 19.4 bn in 2016; moreover, estimates for last quarter show an additional saving of CHF 250mn, targeting an adjusted operating cost base of less than CHF 17bn by the end of 2018. 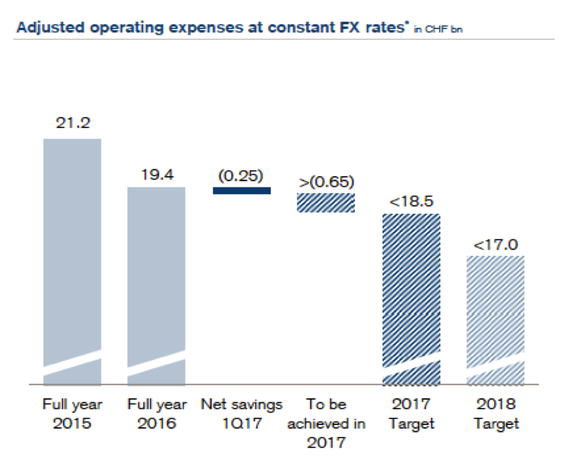 Raising capital is the part of the plan mostly reported in the recent headlines. Initially, the management wanted to raise from 2 to 4 billion Swiss francs through the minority IPO of its Swiss unit, CHF 1.35bn through a non-preemptive placing to institutional investors and CHF 4.7bn with a firmly underwritten rights issue. However, the former was not accomplished, as the bank decided to completely retain the ownership of the historically stable source of cash flows. Nevertheless, the CEO recently stated that the bank is still willing to achieve its capital target, with a $4bn share issue, awaiting for the shareholders’ approval on May 18.
The shares will be offered at a discount price of CHF 10.8 to pre-existing shareholders, and eventually will be underwritten by Deutsche Bank and Morgan Stanley. This move come in a period of uncertainty about solvency of many players within the banking industry, but solidity it is not the only reason why Credit Suisse wants to reinforce both its CET1 ratio and its Tier-1 leverage ratio. Thiam said the growth of the bank is being constrained, hence more capital is needed. Through the share issue, the former ratio is indeed expected to hike up to about 13%, while the latter will meet its going concern requirement of 5%, established by the new Swiss “Too Big To Fail” regulation framework (TBTF2).

Anyway, “all that glitters is not gold”. Despite the bonus cut, shareholders are still concerned about the compensation scheme. Thiam earned 10.24 million francs in 2006, and will gain about 6.62 million francs in 2017. According to Reuters, he is one of the highest-paid bank bosses. Furthermore, despite rosy results over the first quarter, investors are still worried about bank’s profitability, as it generated losses two years in a row.