​It has been over a year since CVS Health Corp. disclosed it was negotiating to acquire Aetna Inc. for more than $66 billion, after the two companies had been in discussions for several months.
The multi-billion acquisition pairs the country’s largest drugstore chain with more than 9,700 stores and 1,100 clinics across the US with one of the biggest US insurers covering more than 22 million people.
The potential deal confirms consolidation as a popular route for healthcare sector’s players, since insurers and pharmacies are under great pressure from both corporations and the government to lower medical costs, whilst a possible Amazon entrance in the prescription drug market is deemed to be the greatest threat for traditional businesses.

CVS, which has already taken a more aggressive stance in price negotiations with drug makers, would gain even more bargaining power if merged with the third US health insurer, whose services range from employer healthcare to government plans.
CVS started opening clinics years ago that, despite not being very profitable, drew people into the stores and built deeper costumer relationship offering services like flu shots and treatments for sinus infections, cholesterol screening and monitoring of chronic conditions. All services that cannot be purchased online. Through the acquisition, CVS would get the opportunity to expand its offer by opening new clinics and adding services such as eye and hearing aid centres.

With regards to the healthcare insurance industry, President Trump’s claim to repeal the Affordable Care Act -which had provided more than 20 million Americans with a health insurance-casted companies into a state of uncertainty about future perspectives. Furthermore, insurers want to gain more control over pharmaceutical products to implement better pricing schemes with doctors and hospitals, while lowering costs through direct negotiations with drug makers- as pharmacy benefit managers like CVS do.
This is the reason why CVS and Aetna had already set a long term partnership in which the former delivers pharmacy benefits to the latter’s clients. As a consequence, the merger looked like the natural subsequent step.

Following the integration CVS could be able to enter new businesses like health savings account, home care and telemedicine. Despite the huge upsides of this strategy, it should be considered that entering those market segments would lead inevitably to a clash with companies like UnitedHealth Group Inc., the largest US insurer that already runs a large pharmacy benefit business as well as doctor practices and clinics, and it might not be easy for CVS to close the competitive gap quickly.

On Sunday December 3rd 2017 the companies announced that CVS would pay about $207 for each Aetna share, consisting of $145 in cash and 0,8378 CVS shares. It means a 29% premium over Aetna’s stock price before the first report about a possible deal in October and that Aetna shareholders would own 22% of CVS.
The cost synergies in the second full year after the transaction were foreseen to amount to $750 million, adding to adjusted earnings per share by the low to mid-single digit percentage points. 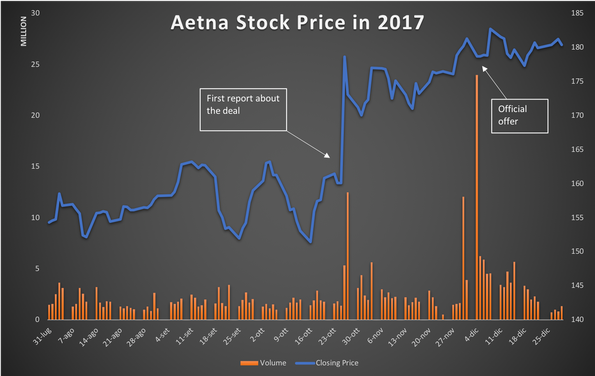 Source: Yahoo Finance
However, the toughest part was yet to come since the deal needed the approval of antitrust regulators. In fact, just one month before the Department of Justice had sued to block AT&T’s $85 billion acquisition of Time Warner and earlier in the year Aetna’s $34 billion purchase of Humana Inc. had fallen apart after regulators sued to stop it. The same had happened with Anthem Inc.’s attempt to buy Cigna Corp. for $48 billion.

Many experts considered CVS-Aetna case to be different and so to have an actual chance to get the clearance.
In fact, all the deals listed above, except from AT&T’s one, were horizontal integrations, which are much more likely to give rise to concerns about market abuse and unfair competition, while CVS-Aetna one was a vertical deal which could also benefit costumers through efficiencies generation and cost cutting.

Eventually it was proved to be the right analysis and on October 10th the DOJ cleared the deal, only one month after the clearance of the merger between Cigna (insurer) and Express Scripts (larger USA pharmacy benefits manager). In both the cases the DOJ recognized there is little horizontal overlap between companies’ businesses and the deals wouldn’t give Cigna and CVS the market power to deliberately increase prices.

Decisive for the clearance was the divestiture of Aetna’s Medicare Part D drug plan business, that together with CVS’s Part D could have resulted in excessive concentration in that specific market segment, meeting some resistance from regulators.
On September 27th Aetna announced that the division- which counts approximately 2.2 billion members- is to be acquired by WellCare Health Plans, an insurance company focused on government-sponsored health plans.  In the filing the company stated that the purchase price is not material to its business, even though no more details were disclosed.

The deal still needs approval from state authorities, but CVS said it remains on track to close within the current quarter.