The announcement of Bob Iger’s retirement was unexpected and seemed somewhat hastily arranged; he has postponed his retirement several times, most recently extending his contract until the end of 2021, but this time, with nearly two years left on his contract, he has been replaced by Bob Chapek, who was head of the parks and resort division from 2015.

This notice arrives in a moment of crucial importance for Disney since it has recently started the debut of the streaming platform Disney+ on the market and with more than 28m subscribers only three months after launching, the company’s service is preparing to debut in the UK and Europe. Disney is now leading the roster of rivals in the online entertainment world with its $7 a month subscription which is around half that of Netflix’s.

In the magic world of Disney, the business unit which includes Parks, Experiences, and Products is still the most profitable in terms of operating income, but Bob Iger has bet the group on an ambitious push into online streaming and has postponed his retirement to guide Disney to the transition.
Moreover, a few weeks ago, the shareholders meeting decided with about 53% of votes for nonbinding executive compensation, including Bob Iger’s $47.5 million packages.

A story of great integration
His story as chief executive in the Mouse House started in 2005 and his signature legacy has been buying and then successfully managing the most famous characters and storylines in Hollywood, each with his own distinct identity. Some of his more important deals include the 2006 acquisition of Pixar for $7.4bn, which seemed exaggerated, but Iger himself justified saying: ”It was about getting the Pixar brand in the Disney machine”; next up was a $4bn bid for Marvel Entertainment in 2009, a $4bn deal to acquire Lucasfilm and the $71.3bn deal to buy Twenty-First Century Fox, all producers of the movie and television shows with the potential to produce revenue at other Disney divisions.

The acquisition of 21st Century Fox by Disney included the 20th Century Fox film and television studios, a 73% stake in National Geographic Partners and a 30% stake in Hulu among other things.
Adding those brands to a subscription streaming service is just the latest step, in fact, last year, Disney launched a streaming service, called Disney+, advertising it as a unique shop for those movies and TV shows produced by those companies which joined the group under Mr. Iger’s lead.
​
Moreover, Disney is putting together a massive streaming package which includes Hulu, ESPN+ and Disney+ for $12.99 making its streaming offer extremely competitive.
This strategy has paid off on Wall Street and Iger is considered one of the most successful CEOs in modern entertainment history. Disney’s share price moved from $24 in 2005 to $117.65 when Bob made his announcement. That rise of about 390% is higher than the 145% gain in the S&P 500 in the same period.

The chart shows the price’s percentual rise of the company comparing it with the S&P 500 index starting from 03/2005, the date when Bob Iger took the role of Chief Executive
His new role
However, the coexistence of Bob Iger with Disney is not over yet. After the step aside of the longtime head of Walt Disney Co., Mr. Iger has taken on the relatively rare role of executive chairman. This position tends to be covered by company founders or longterm CEOs who want to allow a calm transition and want to keep working ensuring their legacy. This is Iger’s case, who still plans to run the company’s creative affairs and probably that means the new Disney+ streaming service along with new films coming from Marvel and Star Wars properties, until his retirement in 2021.

This kind of split between the role of CEO and chairman executive has been implemented by some US companies when the situation gets tough: is the case of Boing Co, AT&T, and Wells Fargo & Co in the last period since it is a recognized as an intention of change from the company and generally a positive sign for shareholders. The separation is aimed to maximize management accountability and the independence of the board. In fact, normally, the CEO monitors the daily operations of the company as the top manager, while the chairman heads the board, which controls the management. Combining both these jobs concentrates power by fundamentally making the CEO the boss of himself.
​
Therefore, this decision is not taken just in cases of crisis, for instance, some industries, like energy, have a history of executive chairman. This trend of separating the CEO and chairman executive brings U.S. companies more in line with their Europeans counterparts. The side of the companies in the Stoxx Europe 600 with the roles of Chief Operating Executive and chairman executive combined was 9.2% in 2018, down from 11% in 2013. 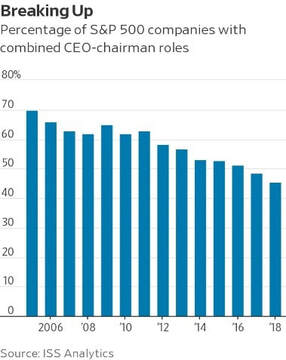 Source: Wall Street Journal
The percentage of S&P 500 companies where the CEO and the chairman executive converge in the same person between 2006 and 2018 is steadily declining
The happiest place on earth face the virus
As the coronavirus pandemic caused widespread cancellations of sporting and other public events, Disney announced that U.S. and Paris resorts will be closed through the end of the month and the new departures for its Disney Cruise Line will be suspended. The parks in Shanghai, Hong Kong, and Tokyo had already been closed and since theme parks generate a combined $21.6 billion in revenue it is a hard hit. However, the company declared it will continue to pay cast members during this time and together with Bob Iger’s words the investors have been reassured, with the Disney shares which added 12% the day after.