Do US investors have reason to fear an inflation hike?​

Last Wednesday the Bureau of Labor Statistics has released the latest tables related to the consumer price index (CPI), showing the changes in the prices of everyday items. The variation of this index could be crucial for investors who inquire themselves into the possibility of an inflation hike, since upward expectations have recently spread but have not been empirically confirmed yet.

The CPI rose 1.9 per cent from last year, while considering the core index, that excludes food and energy costs, the rise amounts to a rate of 1.7 per cent. The result shows a slight deceleration since December, when the numbers were 2.1 per cent for the headline rate and 1.8 per cent for the core number. 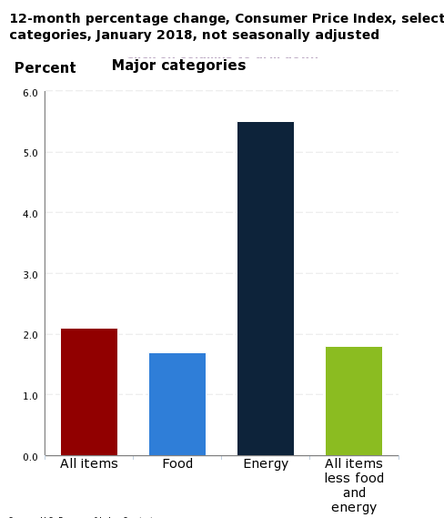 Source: US Bureau of Labor Statistics
Although this data appears to indicate a decrease of the index, long term information may return opposite outcomes. If the month-over-month target is respected, the CPI would rise 2.3 per cent every year on a three-month basis, as Michael Arone, chief investment strategist at State Street Global Advisors stated.
Despite this figure doesn’t appear extremely high, inflation has become a key behavioral variable among investors and even a small rise could unsettle the markets. Moreover, the expected rise of inflation could be explained by macroeconomic variables as well: The United States are near full employment, wages are rising and the federal government is investing more and more money into the private sector by cutting taxes and increasing spending in areas such as defense.
The consequences of a price spike could head to an unsettlement of the delicate policy balance that has shaped the price setting during the nine-year bull market. Investors have become used to low inflation and mild interest rates and these factors kept stable by the Federal Reserve have made sure the economy didn’t move too much in either direction.
However, whenever one of these factors is modified, investors start changing their behavior and fearing for the worst. For example, a reported 2.9 per cent rise of average hourly wages lead to an explosion in equity market volatility on February 2nd and a consequent sell-off. The reason for this deviation is that higher wages lead to higher prices, which lead the Fed to raise interest rates faster than they’d previously expected and consequently to the economy and the stock market slowing down.
As a matter of fact, Fed funds futures markets imply that traders expect at least three rate hikes by the end of this year, with a 50 per cent chance of four. As the announced target inflation is 2 per cent, it is most likely that the Fed will adjust monetary policy, keeping debt-financing cheap and fueling more economic growth.

As regards the bond market, fears of inflation have insinuated as well. Yields on the 10-year treasury notes rose from 2.4 per cent to 2.86 since the beginning of the year. Moreover, corporate bonds have sold off as well and bond-like stocks like utilities have glided. This evidence just appears to confirm that the market is ahead of the data.

If one wants to look deeper into this matter, other indexes can be held into account. For example, the more flexible Personal Consumption Expenditure price index (PCE) released by the Bureau of Economic Analysis, the New York Fed’s underlying inflation gauge, or consumer inflation expectations, rising at 2.8% as of this month.